Binary Quasar Is No Illusion 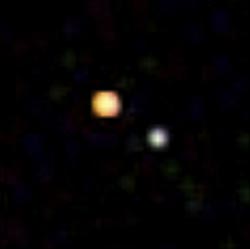 Different colors indicate different X-ray wavelengths emitted from two quasars seen by the Chandra X-ray Observatory. Clearly these can't be two images of the same object. The field is 30 arcseconds wide. Click for a larger view showing the surroundings on a visible-light image.

Astronomers who thought they'd found a 100-trillion-Sun mass of pure dark matter have come up empty handed. A pair of quasar images that looked like an unusual case of gravitational lensing by such a mass has turned out to be simply a pair of quasars.

Astronomers put lots of effort into finding cosmic gravitational lenses. These are special alignments where a very distant object appears multiple or distorted, because its light is bent by the gravitational field of a foreground mass. One promising prospect was the close pair of quasars Q2345+007A and B in Pisces. These two faint specks, 7.3 arcseconds apart, show spectra with the same large redshift (2.15, corresponding to a distance of about 11 billion light-years) and other spectral features that match very closely. They certainly seemed like two images of a single object.

Their relatively wide separation hinted at something with a lot of gravitational force in the foreground, amounting to some 100 trillion solar masses (about the mass of 100 Milky Ways). But astronomers could see no trace of foreground objects. Was the lensing mass made of pure dark matter, something never before discovered?

The Chandra X-ray Observatory says no. Even though the objects' optical spectra appear the same, their X-ray spectra clearly show different features, proving that they are two separate objects after all. Their identical redshifts probably mean they are a binary pair.

However, the couple is interesting in its own right. Separated by 400,000 light-years or more, they are presumably the black-hole cores of galaxies that we can't see though the quasars' glare. They are probably close enough together that a near-collision stirred up interstellar matter in both galaxies, causing some of it to fall toward the central black holes and light up brilliantly. At least that's the theory. "Because there are so many more quasar pairs than you would expect," says quasar astronomer Chris Kochanek (Harvard-Smithsonian Center for Astrophysics), "it tells you that interactions have to trigger a certain amount of activity" and light up galaxy cores.