In Robin McKinley’s retelling of the Beauty and the Beast fable, the Beast refuses to eat while Beauty is watching. With monster fangs and fork-nemesis claws, he can’t eat with the delicacy that befits a lady’s presence.

Astronomers have a similar problem with the Milky Way’s central beast, dubbed Sagittarius A* after a radio source that may be in the black hole’s accretion disk. They know the creature eats — observations at various wavelengths suggest as much — but it does so with little fanfare, unlike other leviathans researchers have caught munching a meal. 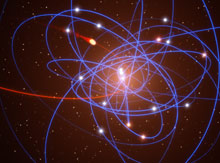 Astronomer have spotted a gas cloud (red-yellow blob above center, with orbit shown in red) that's zooming toward the supermassive black hole in the Milky Way's core. The stars orbiting the black hole are also shown along with blue lines marking their orbits. The stars and the cloud are shown in their actual positions in 2011.

But the chance to watch the beast scarf some cake may actually be on the horizon. An international team reports online December 14th in the journal Nature the discovery of a clump of dusty, ionized gas heading almost straight for the black hole. In 2013 the cloud will reach its closest approach to the beast — a mere 260 times the Earth’s average distance from the Sun, closer than all but two stars have come since astronomers started watching in the 1990s.

“This is an absolutely fantastic result,” says James Moran (Harvard-Smithsonian Center for Astrophysics), who was not involved with the research. “We have prior warning to watch the breakup of a gas cloud in full detail as it is dismembered by the Sgr A* black hole. This is a wonderful and very important event!”

The cloud looks to be about three times the Earth’s mass, stretched out over 120 times the Earth-Sun distance. It’s already being pulled apart by gravity and will elongate like spaghetti, says study coauthor Stefan Gillessen (Max-Planck Institute for Extraterrestrial Physics and University of California, Berkeley). Turbulence inside the blob will also encourage fragmentation. Whether the cloud will survive long enough to make it to the close encounter is debatable: the team still doesn’t know enough about its density and clumpiness to say for sure.

But what they’re hoping for is a light show. A shock front will arise as the spaghetti blob pushes through the less-dense gas currently in the accretion flow. That’ll produce X-rays. As the cloud shoves deeper it’ll lose angular momentum via friction, perhaps enough for some of the blob to be caught into orbit around the black hole. (Energy loss = more glow.) At closest approach the cloud should be more massive and about 60 times denser than the other inflowing stuff, so it could dominate accretion for a little while. Best-case scenario, the cloud could boost Sgr A*’s luminosity by 3,000 over a ten-year period, Gillessen says, although that’s based on the mass-energy of the gas (think E=mc²) and accretion usually only releases at most 10 percent of matter’s mass-energy as radiation. Sgr A*'s conversion rate is usually much less efficient than that, but this time could be different, says Roman Shcherbakov (University of Maryland). Because the cloud is relatively cold and dense, it may actually cause "something dramatic," perhaps a strong flare.

Any flaring could be seen by the Event Horizon Telescope, a planet-wide array of antennas gearing up to actually image the black hole’s silhouette amidst the glow of its accretion disk (see S&T’s February 2012 cover story). The EHT has already observed a previous shift in Sgr A*’s accretion, notes project leader Sheperd Doeleman (MIT Haystack Observatory). By 2013 enough stations could be up and running to take full advantage of what could be a feast for our fasting black hole.

You can watch a video of the cloud's breakup on the ESO's press site.

Question:What kind of time frame are we talking about here,taking into consideration the distance it is away from our earth?