Short-lived infrared signals could be from two neutron stars crashing together. 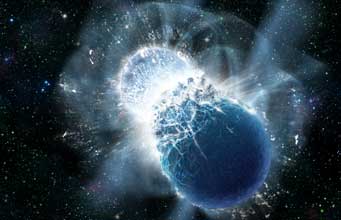 While astronomers haven’t found a smoking gun for the violent collision of two neutron stars, two new studies sure contain a strong whiff of gunpowder.

Merging neutron stars are a hypothetical culprit of certain brilliant but brief high-energy flashes that appear in the sky on a regular basis. Gamma-ray bursts (GRBs) are the signal of powerful jets and fall into two categories: long and short. Long GRBs last longer than 2 seconds and are probably created by massive stars when they collapse to form black holes. Short GRBs are thought to be shot out during the merger of two neutron stars, or a neutron star and a black hole.

The mergers would be no elegant affair. As two neutron stars spiral in for their final approach, they would be covering about 50 kilometers every millisecond, says Daniel Kasen (University of California, Berkeley, and Lawrence Berkeley National Laboratory). “That’s like a carnival ride that takes you around the city of Berkeley 1,000 times a second,” he adds. The force would yank material off the stars’ surfaces and fling it out into space, where it might be joined by more stuff ejected by a hot wind blowing off the merged object. The debris should be a mixture of heavy metals (such as gold and platinum) and radioactive waste, he says.

The radioactivity should cause a faint glow known as a kilonova. Recently, Kasen and Jennifer Barnes (same affiliations) determined that this glow should show up more in the near infrared than in the optical, where astronomers had been looking.

When NASA’s Swift spacecraft detected the short burst GRB 130603B on June 3rd this year, two teams set out to find the theorized kilonova. Using the same Hubble Space Telescope observations taken about nine days after the burst, Edo Berger (Harvard-Smithsonian Center for Astrophysics) and his colleagues and Nial Tanvir (University of Leicester, UK) and his colleagues independently found a near-infrared source where the GRB went off. If the infrared emission was just from the burst’s afterglow, it should have faded away before then.

Tanvir’s team also grabbed a second set of Hubble observations about 30 days after the burst, when the kilonova should have faded away. Sure enough, it was gone.

Although it’s possible that the observed signal was just the burst’s regular afterglow, that would require the burst to have changed its fading behavior somewhere along the way — not very likely. The simplest explanation is that Hubble indeed caught a kilonova’s signature.

“If this interpretation is correct, we have finally witnessed how many of the heavy elements in the universe were created, which would be very exciting,” Kasen says.

While there are some conceivable alternatives, these would have to be pretty unusual in order to explain the infrared glow. “It would certainly be a surprise if it turned out to be something else,” Tanvir says.

TOO NUTRONE STAR COLLIEDING SAME POSSIBLE BUT THERE CAN BE MANY REASON FOR GRAMMA RAY BURST.WHY NOT TOO REGULAR SART COMING TOGETHER .OR A MASSIVE IRON METORITE HITTING A STAR.
OR A STAR JUST SUBBENLY COLLASPING IN ON IT SELF IN SUCH A WAY THAT IT GIVES OFF HUGE GRAMMA RAY BUST.

So elements that are higher in the periodic table are formed from the merger of two neutron stars? What would be formed from the spin off of two galaxy class black holes merging together while spinning in opposite directions with revolution periods approaching the speed of light? Or two UNIVERSE class objects? Another big bang? Perhaps that is why our universe appears "flat".

I am glad to see that there is what may be observable proof to effects of merging neutron stars.

Have we seen any significant amounts of gold in the spectra taken of various star forming regions in nebula? If so, what is the origion of the nebula and how did the gold and other heavy metals get there?

I would like someone tell us the nuclear reactions to give origin to heavy metals. I thought neutron stars are a kind of thermodynamic drain with no coming back.

I hadn't heard about a reaction between only neutrons yielding gold nuggets. The LHC smashes protons and gets sub-atomic particles.