Yesterday bushfires swept through Australia's Warrumbungle National Park, home to Siding Spring Observatory. The telescopes there appear to have escaped harm, but some support facilities and staff homes were destroyed.

Right now more than 170 wildfires are burning portions of New South Wales in Australia — 50 of them uncontained. One of the affected areas is Warrumbungle National Park and, within it, Siding Spring Observatory — the crown jewel of Australian optical astronomy. Late yesterday afternoon a fast-moving bushfire overran a portion of the observatory compound. One weather sensor briefly registered temperatures exceeding 212°F (100°C). 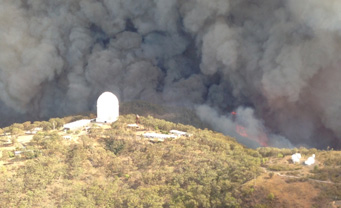 The view from an aerial tanker as it battled a bushfire that threatening Australia's Siding Spring Observatory on January 13, 2013. The dome in the middle houses the 4-meter Anglo-Australian Telescope, the largest of more a dozen optical telescopes at the sprawling facility.

Siding Spring is a sprawling facility operated by Australian National University. It is home to 10 professional optical telescopes (and three others that have been decommissioned), a 22-meter radio dish, and a just-completed complex of amateur robotic telescopes owned by iTelescope.net.

According to the NSW Rural Fire Service, the inferno remained strong overnight, but by 4 a.m. it was moving away from the observatory. Astronomers won't know the true extent of damage until they're allowed back into the area. In many cases their only information is coming from still-operating webcams and computer systems on the mountain. In an ANU news release, officials announced that the site would be closed for two weeks.

Fortunately, everyone on the site was evacuated safely. Reports received from multiple sources suggest that all of the optical telescopes — including the 4-meter Anglo-Australian Telescope (the site's largest) and the 2.3-m Advanced Technology Telescope — have escaped damage.

Also unscathed is LCOGT's 2-meter Faulkes South telescope, whose webcams showed the main observatory complex early this morning. "Made it though with no major problem! " exults LCOGT president Wayne Rosing, "the virtue of clearing a fire break."

"The Sun has risen, and the first images available show positive signs of buildings standing where we saw evidence of small fires last night," write Amanda Bauer, an astronomer who has been keeping vigil through her Astropixie blog.

Brad Moore of iTelescope.net told me, "Initial reports indicate our observatory survived the attack thanks to the generous water air bombings."

There's less optimism for the Mopra radio dish, at which a webcam recorded the fire sweeping over the facility until yesterday's sunset provided too little light to record the scene. One report suggests that the dish itself was spared but that its operations building was damaged.