Ever since its debut in October 2007, I've wanted to visit a curious collection of 42 radio dishes in northern California called the Allen Telescope Array. 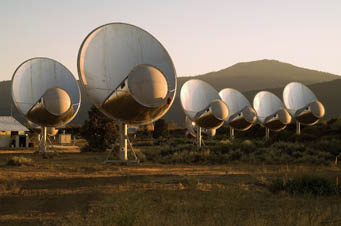 The Allen Telescope Array, developed specifically to search for alien radio transmissions, is part of the University of California's Hat Creek Radio Observatory. To date, 42 of the array's planned 350 dishes have been built. Each is 20 feet (6.1 m) across.

Nestled in an arid, remote valley a few miles from volatile Lassen Peak, the ATA is the first radio "ear" built specifically to listen for broadcasts from alien civilizations. Searches for extraterrestrial intelligence (SETI) have been done before, but never on this scale.

Operated by the Radio Astronomy Laboratory (University of California, Berkeley), the ATA exists thanks to the generosity of Microsoft cofounder Paul G. Allen, whose foundation donated half of the $50 million start-up costs. The rest came from the SETI Institute (which managed fundraising for construction), the State of California (through UC Berkeley), National Science Foundation, and private donations. About half of the observing time has been dedicated to searches for extraterrestrial intelligence (SETI), while astronomers use the remaining time to study cosmic radio sources.

"We've been doing surveys to understand the transient and variable radio sky," explains Geoffrey Bower (UC Berkeley), who is the ATA's project director. "We search for new events such as radio-bright supernovae and gamma-ray-burst afterglows, and so far we've produced catalogs of radio sources over more than 10% of the sky. Moreover, he adds, the ATA is valuable as a platform for testing new instruments and observing techniques in ways that can't be done at larger facilities. 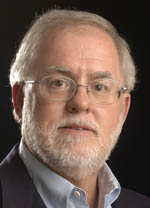 But keeping the array pointing skyward — let alone expanding to the 350 dishes envisioned for the full array — has been been problematic. The poor economy caused state and private funds to dry up, and expected long-term support from the NSF hasn't materialized. So on April 15th the ATA began a "hibernation," as project managers try to find the $1½ million per year needed to resume operations.

In a letter to SETI supporters issued on April 22nd, Institute CEO Thomas Pierson detailed the predicament. "Hibernation means that, starting this week, the equipment is unavailable for normal observations and is being maintained in a safe state by a significantly reduced staff."

The timing couldn't be worse. Radio astronomers had just started using the array to study dozens of tantalizing exoplanet systems discovered recently by NASA's Kepler spacecraft. "We'd like to extend this reconnaissance to the other more-than-a-thousand star systems that might have planets, of course," explains Seth Shostak (SETI Institute). "But more than that, we want to increase the frequency coverage of the best candidates." So far, Shostak says, they've mostly been examined only at the 21-cm wavelength known to SETI buffs as the "water hole". 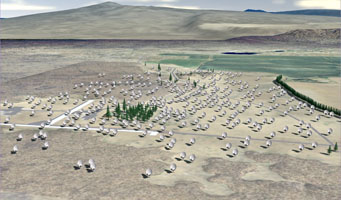 Plans call for expanding the Allen Telescope Array to include 350 antennas. To date, only 42 have been built. Click on the image for a larger view.

The ATA's 42 anteannas, each 20 feet (6.1 m) across, have a combined collecting area equivalent to a single dish 65 feet (20 m) across. But because they're spread out over 1,000 feet, they can resolve the sky down to just a few arcminutes when used together as an interferometer — a big plus when trying to home in on individual stars and their planet systems.

One glimmer of hope for short-term funding might come from the U.S. Air Force, which could enlist the ATA for tracking orbiting satellites and large chunks of space debris. Unlike optical telescopes, the ATA can observe day and night — and when it's cloudy.

But something more robust is needed for the long term. "Right now, we are trying to raise $5 million to cover a two-year search of the Kepler worlds by [SETI pioneer] Jill Tarter and her team," Pierson writes. "This fabulous opportunity represents a fundamental shift to be able to point our instruments at known planetary systems, rather than at stars that might or might not host planets."

Beyond that, Bower estimates it'd take another $10 million to double the array's size and perhaps $50 million to get all 350 dishes built.

"The timing couldn't be worse"... says their press release. Seriously?? SETI projects are famous for their disconnect with reality, but come on. The Kepler exoplanets will still be there tomorrow. Unless, of course, the last transmission from one of them was "arming missiles". Surely there is another story here... It's a shame to see any telescopes sit idle, but how did they fail to plan for normal operations? Maybe SETI@Home should run a few more ads. Or maybe SETI needs to remind SETI@Home users that they're spending money whenever their computers are running that processor-intensive software, so why not spend a little more and donate to the ATA.

I agree with the first comment. The only sad thing about this is that the equipment is not being used for real astronomy, which was the sad thing all along.

They can't raise a piddling $1.5M to keep the observatory going? That just terrible management and worse fund raising. Yes, the economy is obviously not good, but still, this is pathetic.

It seems to be a hot issue for fans of the SETI@home project, but it's really quite amazing how much electrical power the project, as a whole, has consumed in the dozen odd years it's been around. It is claimed that the project has consumed about two million YEARS of computing power (spread over hundreds of thousands of home computers). Figuring that those machines, running at near 100% CPU utilization when running SETI@home were typically adding 100 watts to their power consumption, that comes to about 1.75 billion kilowatt-hours. At typical prices in the US, that amounts to $175 million on electric bills donated by SETI@home participants, roughly $500 per computer over the course of a decade. Maybe they don't realize that they're "donating" this much money, but if they do, then perhaps some of them should be convinced to point their checkbooks in the direction of the Allen Telescope Array instead!

If you don't think SETI is worthwhile that's fine, but why are all these posters so angry at a privately-funded science project that a lot of people support? I take the $500 figure with a large grain of salt, but even if true, I am more than happy to have donated my 14 cents a day to SETI@Home for the last decade.

"...only sad thing about this is that the equipment is not being used for real astronomy, which was the sad thing all along"

Um, perhaps try reading the article first? "About half of the observing time has been dedicated to [SETI], while astronomers use the remaining time to study cosmic radio sources." Sounds a bit like "real" astronomy to me.

James, you wrote:
"If you don't think SETI is worthwhile that's fine, but why are all these posters so angry at a privately-funded science project that a lot of people support? "

Hate? Anger? You're projecting. I think SETI is a worthwhile project, but it's very hard for people to compare it rationally with other scientific research. The fact that I find SETI worthwhile also does not mean that I have to agree with everything that happens in the field. And I should add that those folks who get real pleasure from seeing their computers humming away reducing data through SETI@home have the same right to get pleasure from this hobby as anyone else with whatever hobby they may enjoy. 🙂

And you wrote: "I am more than happy to have donated my 14 cents a day to SETI@Home for the last decade." Sure. And it's a charitable contribution to science. Nothing wrong with that! But if you were told in advance 'we want you to write us a check for $50 a year to buy computer time', it's more likely that you would have thought twice. Many, maybe most, of the people who run SETI@home do not really recognize that they are increasing their electric bills. Of course, for any ONE computer owner, the cost is small, just four or five bucks a month (per installation). Then again, that aggregate $175 million dollars --spent on electric power-- could have funded the ATA for quite a little while. It's all a question of priorities.

Yet another example of a large project that requires big bucks to run. Sometimes, smaller is better!

Not only ATA faces short of money. Some time ago S&T reported that Arecibo Radio Dish closes its activity in radar observing of asteroids. In that case that was only 400k$ as a "significant" saving explanation.

The Future of SETI 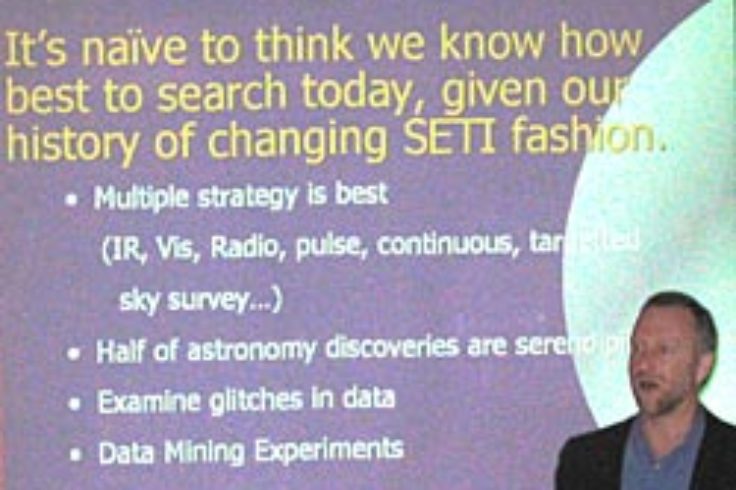 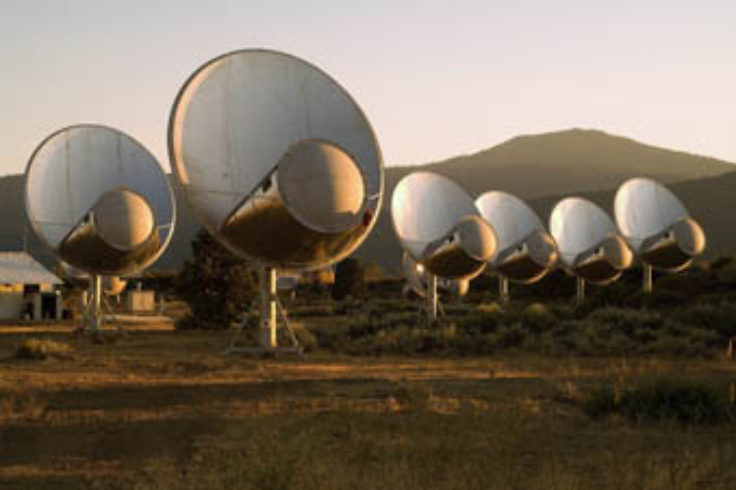 Orbital Path 1: Must Be Aliens 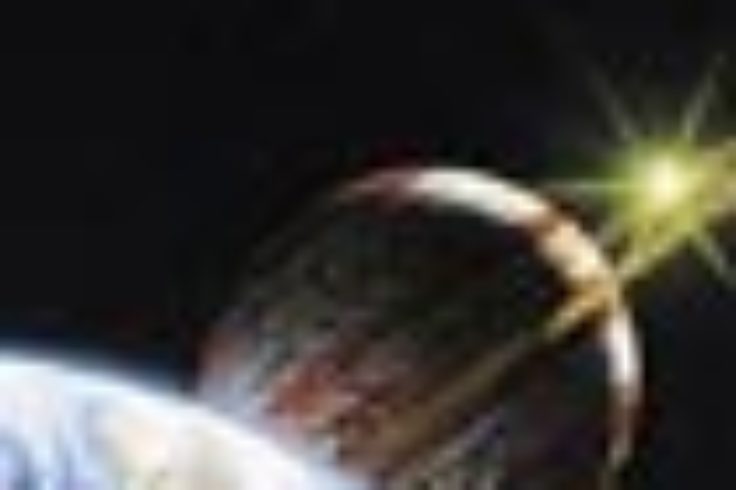