What would you call a towering ring of clouds that swirls around at 300 miles per hour? A hurricane, right? 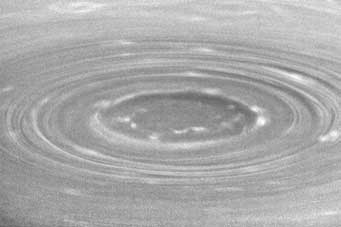 Both of Saturn's poles feature enormous vortices of whirling clouds that planetary astronomers are still trying to understand. The Cassini spacecraft captured this view of the south polar vortex on July 15, 2008.

But atmospheric scientists are stopping short of using that word to describe the monstrous cloud rings they've now found encircling both of Saturn's poles. New visible-light and infrared images from NASA's Cassini orbiter, released yesterday, show that the terrestrial-hurricane analogy only goes so far. That's because these titanic cloud systems dwarf anything on Earth. In fact, when I first saw this one, at the planet's bottom, all I could think of was "Wow!"

Since Saturn's south pole has enjoyed constant sunlight since the spacecraft arrived in July 2004, the Cassini team has gotten to study the southern vortex extensively. Earlier looks had shown a double-ring structure, but the new views reveal even more complexity. The dominant cloud wall is 18,000 miles (30,000 km) across — about twice the size of Earth! — and stands 30 to 40 miles tall. By comparison, the eye wall of a terrestrial hurricane is typically less than 10 miles high. 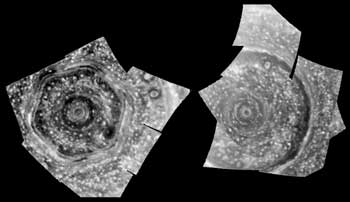 "We can infer that these are truly towering clouds," explains team member Andrew Ingersoll, an atmospheric specialist from Caltech. "Everyone warned me that I shouldn't call this a hurricane, because it's locked on the pole and there's no ocean below to supply the heat to drive it."

Ingersoll notes that the flow around the southern pole is cyclonic (clockwise), indicating a low-pressure system. The interior looks darker because the gas there warms as it moves downward into higher pressures, and that causes clouds to evaporate. However, puffy knots of convective clouds, themselves looking like tiny swirling hurricanes, dot the polar region. These rising cells might be supplying heat from deeper in the atmosphere to keep the system energized.

"So what is it?" Ingersoll muses aloud. "Darned if I know."

He admits that for now the team members are simply trying to characterize what they're seeing. "We're still in the butterfly-collecting phase," he quips. 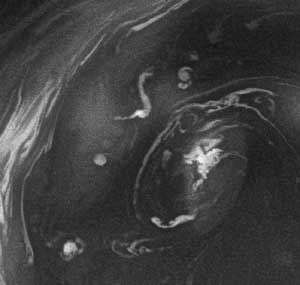 This section of the most detailed view of Saturn's south pole vortex reveals swirls of convection in the clouds.

Meanwhile, he and other mission scientists have known since the 1980s (thanks to the Voyager flybys) that a strange, hexagon-shaped cloud feature some 15,000 miles (24,000 km) across surrounds the planet's northern pole. The cause of its polygonal shape is unclear, though it probably arises from back-and-forth wave motion that takes exactly six cycles to circle the pole at that latitude.

Cassini has been probing the northern structure at infrared wavelengths because the pole has been hidden in nighttime shadow. A particularly good flyover by the orbiter last June revealed many details not previously seen — including another huge vortex inside the hexagon.

The northern vortex is also a cyclonic (low-pressure) system — but, unlike its southern counterpart, it has a bright center. "We don't have an eye — we have a belly button," explains investigator Kevin Baines (Jet Propulsion Laboratory). He reports that winds in this bright core have been clocked at about 350 miles per hour, then fall off in the surrounding broad dark annulus of downwelling gas, then again kick up in the hexagon.

Like its counterpart down south, the northern vortex is dotted with "little" cloud puffs hundreds of miles across that appear to be energized from below.

The head-scratching at Cassini Central probably won't last too much longer. Northern spring is coming on Saturn, and by next year Cassini's visible-light camera should be able to work in concert with the infrared spectrometer to study the northern vortex and hexagon exhaustively.