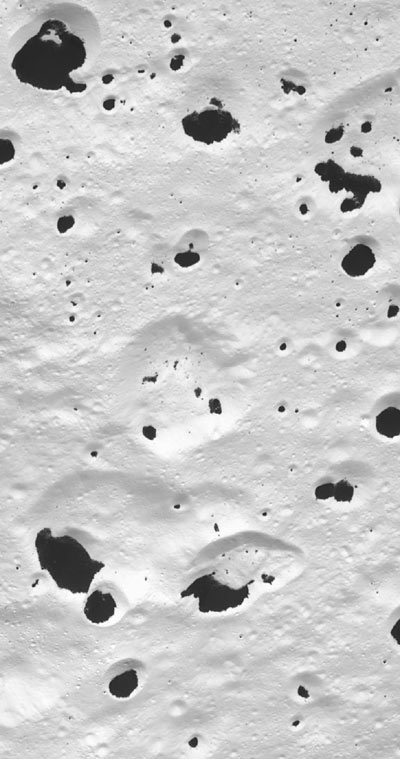 On Iapetus, the Sun's warmth drives off water from the dark stuff to condense on the icy areas, say planetologists. Click on image for larger view and more information.

In fact, for more than 30 years after he discovered it, Cassini with his crude telescopes couldn't see Iapetus on the eastern side of its orbit at all.

Like Saturn's other large moons (and Earth's), Iapetus has a rotation period that's locked to its orbital period, so one side always faces forward in its orbit and the other faces backward. The Voyager and Cassini spacecraft showed that the front side is covered with something that looks like very dark powdered chocolate, and the trailing side is covered with fresh-looking white ice. Cassini’s high-resolution flyby revealed very sharp-edged borders between the two substances everywhere, even in the complex transition zones where they intermingle, as in the landscapes shown here. 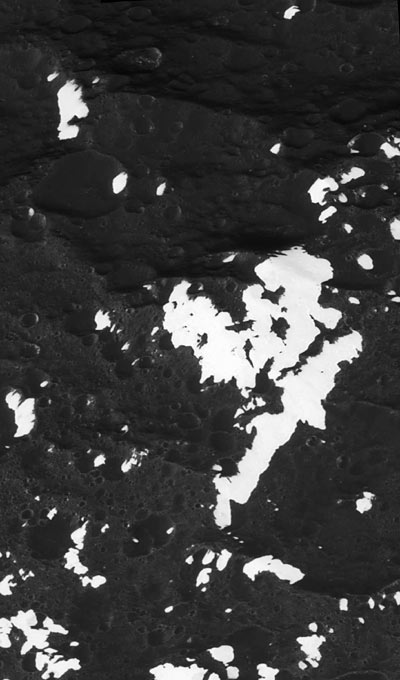 Farther into the transition zone, the areas of dark stuff come to dominated the areas of white stuff. Click image for larger view and more information.

Two groups of planetologists now think they have Iapetus figured out. The front side sweeps up material from the huge, sparse, newly discovered dust ring that originates from tiny Phoebe farther out from Saturn. Phoebe and therefore the ring revolve in the opposite direction from the other moons, so the ring stuff collides with Iapetus head-on. The resulting “chocolate dust” on its front is only meters deep, overlying white ice, says a team at Cornell University. See Cornell's press release and the abstract of the group's paper in Science.

In addition, says another group, sunlight warming this material drives off water to condense on the trailing side. This process explains the abrupt edges and complex patterns in the transition zones. The sublimation-and-condensation process is aided by the fact that Iapetus’s slow rotation allows warmer daytime temperatures to build up in the dark material than on any of Saturn’s shorter-period moons. See abstract, also in the same issue of Science.

Thus ends the big mystery. I always liked Arthur C. Clarke's fictional explanation in 2001 A Space Odyssey that Iapetus was artificially colored by a superior alien race to attract humans to Jupiter in order to discover the transporting monolith in orbit. Seems much more romantic than sweeping up dust, doesn't it?

Everything has a cause and effect.

I liked it better when it was rectangular.