On Wednesday, Frank Taylor noted on his Google Earth Blog that "Google Sky" has some new features. Just launch Google Earth, switch over to the Sky mode with the far-right icon on the top toolbar, and explore the new layers.

Sky now had a lot more information on objects from a variety of telescopes, including the Spitzer and Chandra space telescopes. So there are many more icons to click on the sky.

My favorite addition is the new layer for historical sky charts. You can turn on an overlay of ancient constellation figures from Johannes Hevelius's star atlas. Readers of Sky & Telescope and Night Sky are probably familiar with these pictures because we use them frequently.

A second choice in the Historical Star Map layer is a 1792 celestial globe by Jean-Dominique Cassini (see image below), provided by map collector David Rumsey, who has an interesting site about old star maps. 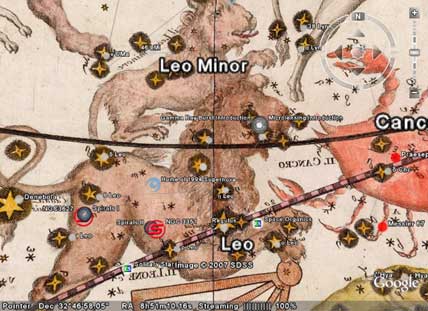 Go retro! You can now visualize the heavens through the eyes of old star maps. A celestial globe by Jean-Dominique Cassini has been imported into Google Earth — hopefully the first of many historical sky charts.

Note that since this layer is from a globe that would be "looking down" on the sky from beyond, when it's mapped so that we're looking out from Earth, the rendition is reversed from the original. Thus all of Cassini's labels are backward.

Finally, I don't think it's a new change in this recent update, but the cursor position reads in R.A. and Dec.