NASA’s Insight Detects Many Marsquakes on the Red Planet 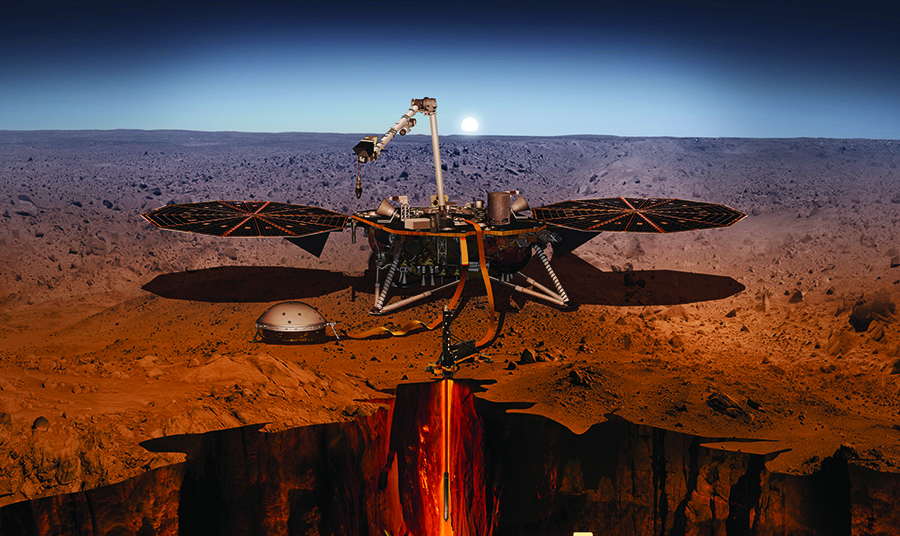 Persistent tremors on Mars suggest the planet’s interior is cooling and hint that there might be a pocket of magma beneath the surface.

Mars quivers regularly with barely discernable quakes, caused by fracturing in the brittle crust as the planet’s interior cools. That’s the takeaway from the first 10 months of observations by NASA’s Interior Exploration using Seismic Investigations, Geodesy and Heat Transport (Insight) lander, which touched down on Mars in November 2018.

Insight is the equivalent of a planetary X-ray. Its goal is to use seismic activity, the flow of heat from the planet’s interior, and the planet’s wobble as it orbits the Sun to reveal what’s inside Mars.

The team reports results from the first of these approaches (and its ancillary instruments) in five papers in Nature Geoscience on February 24th. Some of these results have been trickling out over the last year, but this group of studies is the first big compilation.

Insight detects marsquakes with a a seismometer called the Seismic Experiment for Interior Structure (SEIS). It sits in a little dome on Mars’s surface, shielded from the wind — which nevertheless picks up enough during the day that breezes drown out the shake from small tremors. Only during the still nighttime hours does SEIS sense quakes.

And it’s sensed a lot of them. Over its first 10 months, SEIS detected 174 seismic events. Most of these are tiny and shallow, but 24 propagate much deeper and have magnitudes between 3 and 4. That’s still weak — you probably wouldn’t feel them if you were standing on the surface.

These 24 marsquakes seem to come from much deeper in the planet than earthquakes do, maybe 30 to 50 kilometers down instead of 5 to 10 km, says SEIS principal investigator Philippe Lognonné (Institut de Physique du Globe de Paris). They were also long, lasting 10 to 20 minutes. For comparison, one of the longest earthquakes ever recorded is the devastating 2004 Sumatra event in Indonesia, which lasted between 8 and 10 minutes. Smaller earthquakes fade out much faster than that, attenuated as they travel through Earth’s partially molten interior.

“It’s really amazing what they’ve been able to do with a single seismometer on a remote planet,” he says. In comparison, the USGS’s National Earthquake Information Center uses more than 2,000 seismometers to detect earthquakes worldwide.

The waves’ easier passage indicates that Mars’s upper mantle is more solid than Earth’s, Lognonné says. But seismic waves don’t pass as easily through the martian interior as they do through the excessively dry conditions on the Moon. That suggests Mars’s crust has some moisture in it, perhaps thin films of water in rocks’ pores, he says.

The scattered way marsquakes travel through the planet implies that the uppermost 10 km of Mars is rubbly, broken up by eons of meteoroid impacts. The number of quakes also matches predictions made for small marsquakes more than 20 years ago. “Actually that’s one of my biggest surprises,” says mission principle investigator Bruce Banerdt (JPL).

But Insight hasn’t seen any tremors above magnitude 4, which is odd. That may force the team to be more inventive in probing the planet’s interior, because larger quakes carry information about what lies deeper down in the mantle. If no large marsquakes come Insight’s way, the researchers will have to rely more heavily on what the wobble of Mars’s rotation axis reveals about the size and characteristics of the planet’s core.

Only three of the 24 deep marsquakes were clear enough to trace back to their sources. Two appear to come from Cerberus Fossae, a set of steep troughs in the plains east of the dormant volcano Elysium Mons. The third comes from a bit farther east.

What’s exciting to deputy principal investigator Sue Smrekar (JPL) is that Cerberus Fossae is the most recently geologically and volcanically active region on Mars. Orbiter images show signs of volcanic flows, faults, and moving surface water in the last 10 million years. It’s possible that there’s a magma chamber deep underground here that’s still cooling, she says. As it cools, it would contract, and the crust above it would crack, creating the faults we see.

“We don’t have information from our quakes that says that is what’s going on, it’s a hypothesis,” she cautions. But it’s surprising that there would still be hot magma on Mars. We haven’t found evidence yet for plumes of molten rock rising up from deep inside, she explains, although concentrations of radioactive elements such as uranium and thorium might keep pockets of the subsurface warm. Higher levels of water or carbon dioxide could also make rock easier to melt.

Insight has three primary instrument packages. The new papers only include results from SEIS and the magnetometer and weather instruments that support it. The north pole wobble instrument, Rotation and Interior Structure Experiment (RISE), needs more time to gather data.

Unfortunately the third instrument, an internal heat probe fondly known as the mole, is in rather dire straits. The Heat Flow and Physical Properties Package (HP3) started digging almost exactly a year ago. But it only made it about 35 cm down before it got stuck. A slew of tests determined that the martian soil wasn’t behaving the way it had at other landing sites on the Red Planet — instead of a sandy substance that would fall back in around the probe as it dug, providing traction, the soil clotted, making a wide hole that left the mole nothing to push against as it tried to hammer itself deeper.

The team is now prepping to do what it had hoped never to do, Banerdt says: use the lander’s robotic arm to push the mole down. The researchers think that, if they can press the probe far enough to bring its rear end level with the ground, friction might win out and enable the mole to keep digging. The effort will take six to eight weeks.

Read more about the magnetic field and weather data results in NASA’s press release and the team’s other papers.