A fairly bright nova has been discovered by Japanese observers Koichi Nishiyama (from Kurume) and Fujio Kabashima (Miyaki). They made their find on July 7, 2012, using a 105-mm f/4 camera lens and CCD, describing the nova as magnitude 7.8. It is located in Sagittarius roughly between the "lid" and "spout" of the Teapot stars, at right ascension 18h 20.5m, declination -27° 44' (equinox 2000.0). A number of other observers in Japan have made confirming sightings. 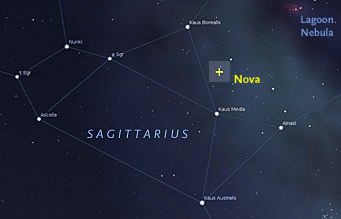 A cross marks the location of a relatively bright nova discovered on July 7, 2012, near the Teapot of Sagittarius. The small light-toned box is 1° on a side — click on the image to get a finder chart corresponding to the square.

The discovery was announced on CBET 3166, issued July 7th by the
Central Bureau for Astronomical Telegrams in Cambridge, Massachusetts. This circular assigns the star the official designations Nova Sagittarii 2012 No. 4 and also PNV J18202726-2744263.

The American Association of Variable Star Observers (AAVSO) is requesting observations of this nova. The AAVSO collects magnitude determinations by skilled observers to aid in the study of novae and other variable stars, and their site offers guidance on the techniques involved.