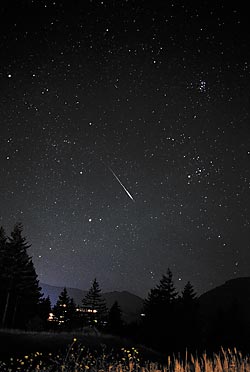 A bright Perseid flashed across the horns of Taurus before dawn on August 13, 2002, while Vincent Varnas was photographing from Stevenson, Washington. He used a 35-mm f/2 lens and Fujicolor Press 1600 film for this lucky 20-second exposure, one of many he took during 2½ hours of sky shooting. To the meteor’s lower left is Mars; to its right are Aldebaran and the Hyades, with the Pleiades above.

Circumstances will be nearly ideal for watching the annual Perseid meteor shower at its predicted maximum late on the night of August 11–12. Many families on August vacations at dark, country sites discover these meteors on their own, and late-summer campers often pull their sleeping bags out of their tents to enjoy this Old Faithful shower.

The Perseids are one of the two strongest and most dependable annual meteor showers (the Geminids of December are the other). Earth’s orbit carries us through the densest part of the Perseid meteoroid stream every year around August 11th or 12th, so these “shooting stars” appear almost like clockwork. Their rates, however, can vary a lot from year to year. An observer under a dark sky might typically see more than 60 Perseids per hour between midnight and dawn. Since the waning crescent Moon will be only three days from new at the time of shower maximum, this is an opportune year for watching them.

But that is only one reason why anticipation is running high among meteor observers. How the 2004 shower will actually perform is anybody’s guess — but it will probably be better than normal, and there’s a chance it could be spectacular.

The meteoroids of the Perseid stream range in size from pebbles to sand grains and have a consistency like bits of ash. They ram into our upper atmosphere at a speed of 60 kilometers per second, creating incandescent trails of shocked, ionized air as they vaporize.

On the peak night, the Perseids will appear to diverge from a patch of sky between Perseus and Cassiopeia just east of the famous Double Cluster. The meteors’ apparent divergence from this radiant point is an effect of perspective; the meteoroids are actually traveling in parallel through space. Meteors appearing near the radiant will display short trails because we see them nearly end on, while those far from the radiant, seen broadside, look much longer.

In the early-evening hours the radiant is low in the north-northeast, so the meteors strike the upper atmosphere at a low angle — and therefore we see comparatively few of them per square kilometer at the atmosphere’s top. As the night advances, the radiant rises higher in the northeast, the meteors arrive more nearly straight down, and so we see more of them. By the time morning twilight begins, the radiant has climbed to around 60° altitude for observers at midnorthern latitudes.

If it’s cloudy on the peak night, don’t despair; for one or two nights before and after, rates are still roughly a quarter to half of the maximum. In fact, the first few forerunners of the shower may show up as early as July 20th; the last stragglers have been recorded as late as August 24th.

Interference by moonlight this year will be minor, especially after the peak date, permitting night-after-night monitoring of the shower’s buildup and decline. On the morning of August 10th the thick waning crescent Moon won’t rise until about 1 a.m. local daylight time for observers in midnorthern latitudes. On the 12th, a thinner crescent will come up about 2:30 a.m. The Moon is new on the 15th, and for a week afterward the waxing crescent will set before midnight.

Meteor watching is simple. Pick an observing site that’s free of glary lights nearby, has an open view of the sky, and preferably is as far as possible out from under city light pollution. Don’t forget the mosquito repellent. Bundle up in blankets or a sleeping bag, lie back, and gaze into the stars. The direction to watch is wherever your sky is darkest, usually straight up. For more observing hints, see "Basics of Meteor Observing". 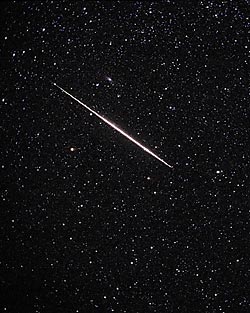 A bright Perseid streaks just below the Andromeda Galaxy, M31, during the 2002 shower. Joe Orman took this 5-minute exposure through a 40-millimeter lens at f/2.8 on Ektachrome P1600 slide film.

The source of the Perseid shower is comet 109P/Swift-Tuttle, which orbits the Sun in a long, roughly 130-year ellipse. The comet sheds bits of its material each time it returns near the Sun. This debris keeps traveling along near the comet's orbital path, creating a sparse "river of rubble" in space.

The comet swept past the Sun during the summer of 1862 and made a return appearance in December 1992. By no coincidence, in the early 1990s the Perseids performed spectacularly — displaying a new, additional, much briefer peak with outbursts of up to several hundred meteors per hour in 1991, 1992, and 1993. This new peak was slightly offset in time from the weaker, longer-lasting "traditional" peak of Perseid activity.

In the years after the comet's departure, the strong, new Perseid peak decreased. For the last three years it has failed to appear at all. Accordingly, Perseid forecasts have generally returned to normal — with the maximum lasting about 12 hours centered on the time when the Earth is at the place in its orbit marked by the Sun's ecliptic longitude being 140.0° (equinox 2000.0).

In 2004 that time is 11h Universal Time on August 12th (7 a.m. Eastern Daylight Time, 4 a.m. Pacific Daylight Time). So North America, especially the West and Hawaii, is optimally positioned to catch the peak.

The consensus among meteor astronomers is that the particles of the new, 1990s peak were probably shed by Comet Swift-Tuttle during its swing by the Sun in 1862, and that as far as this rich filament of meteoroids is concerned, the show is over. But now, astronomers Esko Lyytinen of Finland and Tom Van Flandern of Washington, DC, suggest that the new Perseid peak could stage a return appearance in 2004. They predict that this year, the one-revolution rubble trail released in 1862 will be passing just 0.00132 astronomical unit (about 200,000 km) inside Earth's orbit at the time of solar longitude 139.440°. That's 20:50 UT on August 11th, favoring meteor watchers in Eastern Europe and eastern North Africa eastward to central Russia, India, and western China.

Lyytinen and Van Flandern base their prediction on the same techniques they used (rather successfully) in forecasting the intensities of the Leonid showers from 1999 through 2002. "It is very uncertain what kind of a shower this will give," notes Lyytinen. "If the numbers of particles released for the 1862 trail were the same as for the Leonid parent comet, I would say a ZHR [zenith hourly rate] of around 100 is possible. But," he adds, "we must also consider that the Perseid parent comet is a lot bigger than the Leonid comet, so there may even be a slight chance of storm-level activity," meaning a ZHR of 1,000 or more. Lyytinen and Van Flandern believe that most of these meteors could be rather faint, 3rd and 4th magnitude. If an outburst happens, it is likely to last no more than about 40 minutes.

Last, because recent perturbations by Jupiter are directing old Perseid meteoroids about 0.01 a.u. closer to the Sun, the core of the broader, "traditional" stream may be shifted closer to Earth¡|s orbit, resulting in a stronger-than-average annual shower. In fact, Lyytinen and Van Flandern suspect that the Perseids tend to put on stronger-than-average displays at 12-year intervals (12 years being Jupiter's orbital period), and that 2004 is one of the favored years. The 1992 display might not qualify for comparison because the parent comet was nearby — but 1980 brought an excellent show punctuated by many fireballs, and 1968 was rated quite good despite bright moonlight.

Will we be similarly rewarded this year? If so, the enhancement would come into play only around the date of the normal maximum, perhaps even appearing as a new, additional peak.

So there could hardly be more incentive for meteor watchers to be out in force this month. One thing is certain: the Moon will be dark and the meteors bright.