Let's see if I've got the story straight: 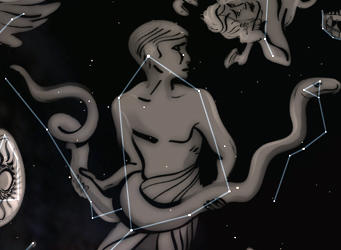 Ophiuchus, the Serpent Bearer, is a large but undistinguished constellation well known to stargazers.

Last week Parke Kunkle, who teaches astronomy in Minnesota, noted in the Minneapolis Star-Tribune that the zodiac should actually have 13 (not 12) constellations, the addition being Ophiuchus, the Serpent Bearer. Then he added that, over time, the precessional wobble of Earth's spin axis has shifted the astrological Sun signs a bit. Those who'd long believed they were under the influence of Leo were actually associated with Cancer, and so on. This revelation spread through the Web like wildfire, swamping Kunkle with interview requests from around the world.

It must have been a slow news day.

As pointed out by my S&T colleague Tony Flanders (our go-to guy for matters mythological), the ancient Roman polymath Claudius Ptolemy was perfectly aware of all this when he established both modern astronomy and modern astrology two millennia ago. He was content to have a portion of the constellation Ophiuchus poking over the ecliptic (the Sun's path among the stars) without counting it as a zodiacal constellation. "Needless to say," Flanders adds, "Ptolemy was also very well aware of precession — and very intentionally chose to ignore it."

Now, the point of telling you this isn't to lock horns with astrologers. But if asked they'll openly admit that the zodiacal signs used to derive their horoscopes reflect the Sun's position among the stars as would have been the case long ago, not now. Besides, even before astronomers established modern constellation boundaries in 1930, the Sun never spent exactly one month in each of the 12 wayposts along the zodiac. Sun signs have always been an approximation.

Just to prove that this really is old news, here's a humorous essay by California optician David Hasenauer that Sky & Telescope published in June 1998.