The object known as 1998 QE2 is one of the largest near-Earth asteroids known. On May 31st it passes by at a distance of 3.6 million miles (5.8 million km), close enough to be studied by radar astronomers.

Usually, when a small asteroid comes close to Earth, it's here and gone in a matter of hours. But that's not the case with 1998 QE2, which is making a courtesy call this week. It appears brighter than 12th magnitude from now through to June 7th, peaking at 10.7 on the nights of June 1st and 2nd.

Discovered by the LINEAR robotic telescope nearly 15 years ago, 1998 QE2 was soon identified in enough images to nail down its orbit and earn it the minor-planet number 285263, though it has yet to be named. But it was swept up a decade later in a survey of near-Earth objects by the Spitzer Space Telescope. That infrared signature, together with visual observations, led David Trilling (Northern Arizona University) and others to conclude that this asteroid has a diameter of 1.7 miles (2.7 km), meaning that it ranks as one of the largest near-Earth asteroids (NEAs) known. 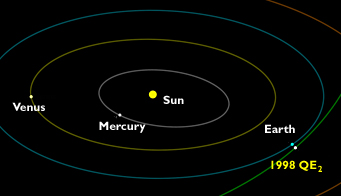 The elongated orbit of asteroid 1998 QE2 averages 2.42 astronomical units from the Sun but comes quite close to Earth. Click here for a larger version.

Based on a 3.77-year orbit that brings it as close as 1.049 astronomical units to the Sun, 1998 QE2 is classified as an Amor asteroid. It's also been tagged as a potentially hazardous object by the IAU's Minor Planet Center, but there's nothing to fear from this giant space rock in the near future.

Instead, this week it will glide slowly past us, coming no closer than 3.6 million miles (5.8 million km) at 4:59 p.m. EDT (20:59 Universal Time) on May 31st. That's about 15 times farther than the Moon. Yet, according to a NASA press release, this is its closest approach to Earth for at least the next two centuries. Here's a simulation, from the asteroid's perspective, of its flyby past the Earth-Moon system.

Astronomers are already pinging radar bursts off the visitor to learn more about it — and they've already gotten a big surprise: it's got a satellite! In a series of observations on May 29th with the space agency's big 230-foot (70-m) antenna at Goldstone, California, Marina Brozovi? (Jet Propulsion Laboratory) led a team that made the discovery.

The first radar images of asteroid 1998 QE2, acquired on May 29, 2013, revealed that the asteroid has a companion (whitish spot). Radar illumination is from the top, and the resolution is about 250 feet (75 m).

As seen at right, the radar-bright companion appears to be moving independently of its parent body. According to NASA's announcement earlier today, the satellite's apparently small radar reflection is deceiving: it's actually close to 2,000 feet (600 m) wide. Note the dark mottling seen on 1998 QE2 as it rotates (in about 4 hours, based on these frames). These are likely concavities in its surface.

Binary asteroids are not rare among NEAs. Statistically, they account for about a sixth of those objects that are at least 650 feet (200 m) in diameter.

According to Lance Benner (Jet Propulsion Laboratory), the big Goldstone antenna will continue making its radar observations through June 9th. The even larger dish at Arecibo, Puerto Rico, is planning to track the interloper from June 6th to 12th. If these observations go smoothly, the resulting radar maps could resolve details on the asteroid's surface as small as 12½ feet (3¾ m) — a 20-fold improvement over the first looks seen here.

It might be big and slow-moving, but spotting 1998 QE2 telescopically will be a challenge. Until now it's been positioned moderately deep in the southern sky, moving slowly northward through Centaurus and Hydra. This coming week it glides a bit east of Zubenelgenubi and Zubeneschamali, the anchor stars in Libra.

Your best bet is to utilize the "Horizons" system at NASA's Jet Propulsion Laboratory to generate a custom ephemeris for your location. To do this, go to the ephemeris page for this object, enter your location and the time span desired, and click on the "Generate Ephemeris" button. This will provide coordinates that you can then plot on a star chart that, preferably, includes stars to 12th magnitude. Alternately, you can input the orbital elements for 1998 QE2, provided by either Horizons, the Minor Planet Center, or the European Space Agency's NEODys-2, into a star-charting program.

A 11-image sequence taken on May 31, 2013, shows asteroid 1998 QE2 moving among faint stars near Libra's intersection with Virgo and Hydra. Gavin Khoo recorded this series of 10-second-long exposures, one per minute, using an 8-inch telescope and Canon EOS 60D camera.

If you'd rather just watch from afar, there are opportunities for that too. NASA is planning three social-media events. Today at 1:30 p.m. EDT (17:30 UT), live images of the asteroid are being shown on NASA Television and on the space agency's Ustream channel, along with commentary by NASA administrator Charles Bolden and asteroid specialists from JPL. A two-hour online chat with William Cooke (NASA-Marshall Space Flight Center) begins later today at 5 p.m. EDT (21:00 UT). And on May 31st at 11 a.m. EDT (15:00 UT), NASA deputy administrator Lori Garver will participate in a White House "We the Geeks" Google+ Hangout.