Comet ISON, anticipated by skywatchers for more than a year, is brightening just days from its fateful hairpin swing around the broiling surface of the Sun on November 28th. As of November 20th it was a greenish-white fuzzy "star" in binoculars. Since then it has become much harder to see, moving lower and lower in the east-southeast in the brightening dawn. 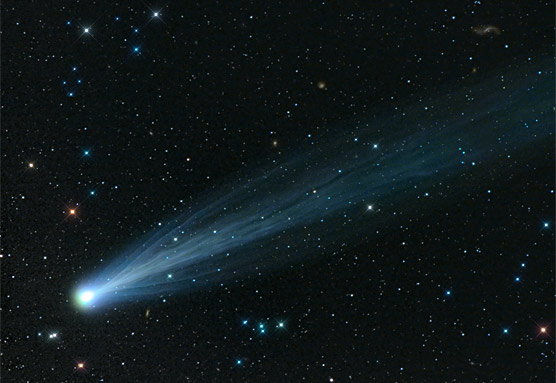 Comet ISON, imaged by longtime amateur astrophotograper Damian Peach in the U.K. He used a 4-inch f/5 refractor for 12 minutes of combined exposures on November 15th.
Media and websites may use this image free of charge with the credits given below. Online use must include the links.

What will emerge from its solar encounter into the dawns of early December?

"We might witness a fine, long-tailed comet visible to the naked eye that will leave millions of people with fond memories for a lifetime," says Alan MacRobert, a senior editor of Sky & Telescope magazine. "Or maybe it will be a small comet for sky hunters using binoculars and a good map of its position. Or it might yet break up and vanish."

It all depends on what happens to the comet's tiny nucleus, its only solid part. A comet's nucleus is a dirty iceball that's just a pinpoint by astronomical standards — in this case less than a mile or two across. As it flies in from the cold outer solar system and warms in the heat of the Sun, some of its ice evaporates, releasing gas and dust that expands by thousands or millions of miles to become the comet's glowing head ("coma") and tail. 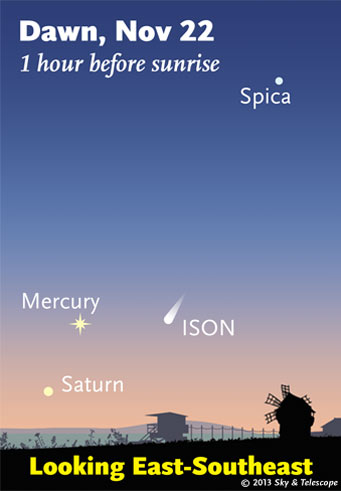 Where to look for Comet ISON low in early dawn on the morning of November 22nd. Mercury and Saturn will be much brighter; start with them to find the spot to examine for the comet with binoculars. (The comet symbol is exaggerated.)

For scale, this scene is about twice as wide as your fist held at arm's length.

Click image for high-res version, free for public and media use with credit to
SkyandTelescope.com . Online use must include the link in the credit. 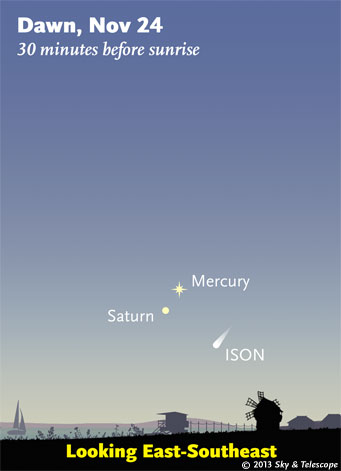 Where to look for Comet ISON low in early dawn on the morning of November 24th. (For Saturday morning the 23rd, the comet is directly right of Mercury and Saturn.) By now it's probably too low in bright morning twilight, but here's where to try. Mercury and Saturn will be much brighter; start with them to find the spot to examine for the comet with binoculars or a wide-field telescope. The comet symbol is exaggerated.

For scale, this scene is two or three times as wide as your fist held at arm's length.

Click image for high-res version, free for public and media use with credit to
SkyandTelescope.com . Online use must include the link in the credit. 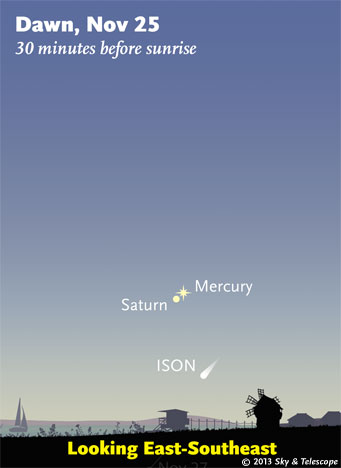 As Mercury and Saturn come together less than 1° apart, Comet ISON is almost surely too low in bright morning twilight to be detected. But here's where to try, in case it has brightened unexpectedly. Use binoculars or a telescope. (The comet symbol is exaggerated.)

For scale, this scene is two or three times as wide as your fist held at arm's length.

ISON will pass closest to the Sun's surface — by less than one Sun diameter! — for a few hours on Thanksgiving Day, November 28th. (Closest time: around 2 p.m. EST; 19:00 Universal Time [GMT].) The Sun will be enormous from the comet's point of view, filling the comet's sky and broiling its surface to a temperature of about 2,700° C (4,900° F). That's almost hot enough to melt iron, not to mention ice. In addition, the Sun's tidal force (the difference in the Sun's gravitational force on the nucleus's near and far sides), combined with the nucleus's 10-hour rotation, could help to break it apart.

An object's closest approach to the Sun is called its perihelion. If ISON breaks up before then, as comets sometimes do, little or nothing visible may emerge from the other side of the close encounter. If the nucleus holds together, we might get a memorable celestial sight early in the December dawns, at least for people who know where to look.

If the comet breaks into pieces around or after perihelion, the pieces wouldn't have time to disperse far apart into invisibility. More icy surface area would be exposed to the solar broiling, more dust and gas would blow off to make a brighter tail, and the December dawn display could be glorious.

No one yet knows what will happen.

As it approached the Sun, the warming comet brightened into binocular visibility. Amateur astronomers have also been taking spectacular long-exposure photos of it through telescopes, such as the one at the top of this page. (Click the image for a high-resolution version free for use if credit is given as in the caption).

The naked-eye sightings of ISON that have been reported so far come from skilled observers under dark skies using detailed star charts to pinpoint its exact location.

“If you want to try viewing ISON in binoculars before perihelion, don’t wait!” says Sky & Telescope associate editor Tony Flanders. “It’s appearing much lower and harder to see each morning as it approaches the Sun.”

Find a spot with an unobstructed view right down to the east-southeast horizon. Start looking at least an hour before your local sunrise time and continue scanning the sky as dawn grows brighter. Mercury and Saturn help to point the way, as shown in our daily dawn-scene graphics here. The comet symbol in them is very exaggerated; it’s meant to show where the comet is, not to be a realistic picture. (Click the graphics for high-resolution versions, free for use with credit.)

A second comet is currently higher and much easier to see in binoculars before dawn's first light begins! That means looking at least 90 minutes before your local sunrise time. It's named Comet Lovejoy C/2013 R1 (not to be confused with the other three Comet Lovejoys discovered by Terry Lovejoy of Australia). You'll need to use Sky & Telescope's detailed finder chart for it. Included with that is a similarly detailed chart for ISON among faint stars in late November.

We'll have more to say as ISON rounds the Sun and its future becomes clear.

A comet’s trajectory through the solar system is governed by the laws of gravity, so astronomers can predict months or years in advance exactly when and where a comet will appear in the sky. But how bright it will be is a lot less predictable. This is especially true of a "Sun-grazer" comet like ISON.

Some Sun-grazers have performed better than expected, such as Comet Ikeya-Seki in 1965 and Comet Lovejoy C/2011 W3 in 2011. Many experts predicted that the nucleus of the 2011 Comet Lovejoy would disintegrate during its very close pass by the Sun that December, but it survived long enough before breaking up to produce a spectacular long tail easily visible for people in the Southern Hemisphere.

“All of us at Sky & Telescope are hoping that Comet ISON will be a glorious spectacle in December,” says Sky & Telescope editor in chief Robert Naeye. “But we also remember past comet flops such as Comet Kohoutek in 1974, which was actually a fairly nice comet but unfortunately fell far short of the hype. It’s important for the media to emphasize the unpredictable nature of comets, and that it’s by no means guaranteed that ISON will turn into a show-stopping comet later this year, or even one that most people will see at all without good charts and optical aid.”

ISON is named for the Russia-based International Scientific Optical Network, in which the comet's discoverers, Artyom Novichonok and Vitali Nevski, were participating when they first detected the incoming comet in September 2012.