Get Ready for the 2013 Perseids

A perennial favorite among skywatchers, the Perseid meteor shower makes its annual return on the nights of August 11-12 and 12-13. 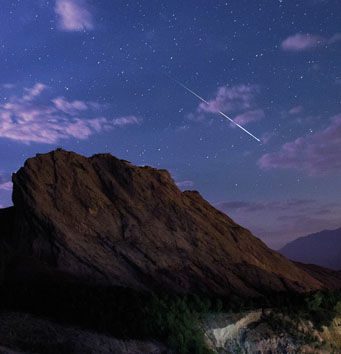 A Perseid meteor zips over Iran's Alamut Valley during the peak of the Perseid meteor shower in August 2012. Click on the image for a larger, full-frame version.

The Perseid meteor shower peaks this year when there's almost no Moon, affording a dark sky for late-night shooting-star spectators and counters. A thick waxing crescent Moon sets in mid-evening, so it will offer little interference for this year's event.

Earth should go through the densest part of the stream for some hours on August 12th around 19h Universal Time, which is 3 p.m. Eastern Daylight Time. This means the shower's peak splits the difference between the early-morning hours of August 12th and 13th for anyone in North America or Europe. So the number you count on each of those mornings, even in ideal conditions (no light pollution and the radiant nearly overhead) might not match the International Meteor Organization's predicted peak of 100 per hour. But surprises can always happen. 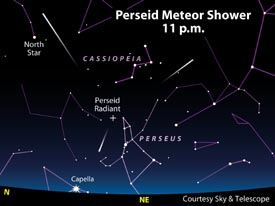 Perseid meteors can appear anywhere in the sky, but they appear to stream outward from a spot (called the radiant) in the constellation Perseus.

Some Perseids appear beginning around 9 p.m., but they're always better from about 11 p.m. or midnight until the first light of dawn. This is when the shower's radiant point in northern Perseus climbs high in the northeastern sky. Or, to put it another way, this is when your side of Earth turns to face the oncoming meteor stream more directly.

These "shooting stars" are actually bits of debris shed by Comet 109P/Swift-Tuttle. Streaking into Earth's upper atmosphere at a relatively fast 37 miles (60 km) per second, they create superheated plasma (ionized air molecules) along their path. This incandescent gas, which includes vapor from the incinerating particle, creates the momentary streaks of light we see in the sky. 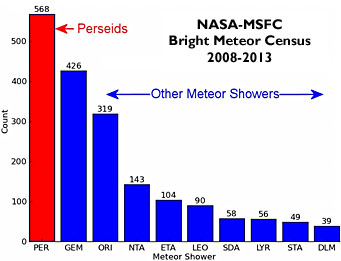 Since 2008, the Perseids have produced more bright meteors than any other annual meteor shower.

Bigger particles create bigger flashes, called fireballs. Using a network of meteor cameras distributed across the southern U.S., a team of NASA scientists has amassed a database of hundreds of very bright meteors since 2008. They've found that the Perseids are richer in these showy flashes than any other shower.

Moreover, notes William Cooke of NASA's Marshall Space Flight Center, the average bright Perseid in the census has a magnitude of –2.7, compared with –2.0 for the Geminids. (A fireball is any meteor of –4 or brighter.)

"Comet Swift-Tuttle has a huge nucleus — about 26 km [16 miles] in diameter," explains Cooke. "Most other comets are much smaller, with nuclei only a few kilometers across. As a result, Comet Swift-Tuttle produces a large number of meteoroids, many of which are large enough to produce fireballs."

Two much weaker showers are also active at this time of year, the Delta Aquariids and Kappa Cygnids. 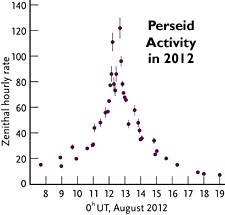 This plot of 27,537 Perseids reported in 2012 shows the shower is active for several days but has a sharp peak. The zenithal hourly rate is what someone would have seen if the showerâ€™s radiant were overhead under perfectly dark, clear skies. Vertical bars show the statistical uncertainty for each point.

Meteor-watching is easy! Find a spot with an open sky view and no bright lights. Lie back in a reclining lawn chair, bundle up in a sleeping bag against mosquitoes and the late-night cold, and watch the stars. Expect an average of roughly one Perseid per minute under fine conditions, fewer of them if you have significant light pollution.

Check out these helpful tips for enhancing your Perseid watch. Try making a reportable meteor count, using the methods detailed by the IMO. Send your observations to the IMO or to the North American Meteor Network. And watch other observers' counts accumulate almost in real time.

The Perseids were especially dramatic in the 1990s around the time of Swift-Tuttle's most recent return, but they have since reverted to normal. The comet isn't due back until around 2122.

For more on meteor-watching, download our new ebook, Shooting Stars. It's free!

And for a laugh, check out XKCD's tongue-in-cheek guide to this year's meteor showers.

The title of your article states "...nights of August 11th and 12th...". Then, in the article you state "This means the shower's peak splits the difference between the early-morning hours of August 12th and 13th for anyone in North America or Europe.

hi, Ron... sorry if it's not clear, but the dates are correct. if you stay up late enough on the evening of August 11th it becomes the morning of the 12th; likewise for the 12th and 13th. both windows will be good here in the U.S. for Europeans, the first of these has the edge.

Though infrequent, it is worth mentioning the nature of the early evening Perseids. Specifically, the radiant is on the horizon and yields long burns as the particle is essentially skimming the atmosphere instead of plunging in more steeply. Once seen, these are unforgettable.

I heartily agree with Mr. Fleming. Very few articles mention it; the only one I know of is linked below. Also ZHR numbers are rather meaningless. Many people not completely familiar with meteor details do not understand what it means and it is therefore misleading to them. The link also gives more meaningful numbers in regard to counts that should be expected. "During the weekend of August 10/11, Perseid meteors will be visible near a rate of 20-40 per hour, depending on the time of night and your viewing conditions. On Monday morning August 12, the maximum rates should be near 60 per hour for observers under dark and transparent skies. If your skies are hazy then perhaps 40 per hour may be visible. If viewing from urban skies then expect to see no more than 20 Perseids per hour. By the morning of August 13, rates will have fallen by 50% to near 30 per hour." http://www.amsmeteors.org/2013/08/viewing-the-perseid-meteor-shower-in-2013/

Great article; I am in Brazil right now -- will I be able to see the meteor shower tonight?

Hello all SkyandTelescope editors and contributors. We are Pleased to announce that finally, after a clearing on the cloudy sky this morning, 8-12-2013 from 4:30am to 5:20am, EST, we spotted clearly about 23 meteors, one of them was enormous, as bright as the moon when full. No kidding. We had a camera but when this huge meteor passed was on the corner of the view of the camera. We were using an old film camera with open iris and B set, can´t afford yet a $1-2k DSLR sophisticated enough to get these showers. We will develop and see what we got. We are expecting similar partly cloudy to clear patched conditions tonight. Many people came, we were at a park where closest light fixture was at 100m. Kids were really excited, looking up and waiting the next meteor. Greetings from Panama.

From what I understand, you can still see the shower in the early dawn, but the rates will be much less in the southern hemisphere and lower in the sky (northeast direction, closer to horizon). Happy meteor-watching!

We are in south Georgia, USA. We are atop a high bluff in an agricultural area. Low horizon is not great her due to dust and moisture; however the light pollution is not bad at all so we can see sky dome events well. We started watching for the 2013 Persieds August 8 & 9 at dark. There have been several memorable grazers over that first, and later nights. August 9th there was one very bright one about 10:30 pm. None that we saw on the 9th/10th, but a couple nice ones around midnight on the evening of 10th/11th. Last night around midnight (11th/12th) there was a really spectacular grazing strike that crossed about half our visible sky. It sent out sparklers for most of its flight then a short skip with no streak before a splash of light at its end. We will be back tonight for sure!

I'd like a recommendation (or two) where I might be able to find reasonably dark skies around Los Angeles (south-east of) to observe the Persieds without having to drive 100+ miles to do so. Typically, I would drive to Joshua Tree or thereabout but it is a weeknight after all. Any suggestions? Thanks!

It would help tremendously if everybody would turn off their front-porch lights tonight. And if you must go out, please remember to drive with your headlights off!