A widely publicized occultation of the bright star Regulus by asteroid Erigone on March 20th went unseen because bad weather blanketed the entire path — from upstate New York to Bermuda. 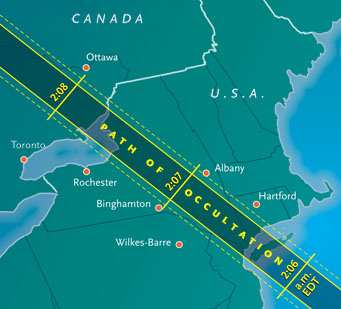 Moving from southeast to northwest early on March 20, 2014, the shadow of Erigone cast by Regulus swept across heavily populated parts of New York, New Jersey, and Connecticut at 11,400 miles per hour.

It had all the makings of a Big Event. For several seconds early on March 20th, the bright star Regulus was going to literally disappear from view — briefly covered by the faint asteroid 163 Erigone. Lying along the path was a densely populated urban corridor that even included New York City.

Never before had the occultation of so bright a star been predicted for North America, and literally millions of people had the potential to see it. "Regulus shines right through moonlight and light pollution that's in the sky — even the light pollution over a city like New York," wrote my S&T colleague Alan MacRobert in his preview of the event.

But sometimes the weather gods just don't see eye-to-eye with skywatchers. About 5 days beforehand, devoted observer and veteran meteorologist Joe Rao saw ominous signs in the forecast. "For the last few days," he told observers via email, "the models have been indicating that an approaching cold front from the west would bring cloudy and showery conditions to eastern New York State for March 20 at 2 a.m. EDT."

Rao thought the front might push through in time for clearing to work in behind it — but no such luck. As time for the historic occultation neared, most of the predicted path was hopelessly socked in. S&T assistant editor Camille Carlisle had ventured into upstate New York for the event. "We were totally clouded out for the occultation," she says. "It looked like someone had thrown a fuzzy wool blanket over the sky." Those in the Big Apple fared no better. "Alas, it was cloudy with fog and drizzle here in New York City," reported Tony Hoffman, "with not even a glimpse of the Moon, let alone any stars, tonight." 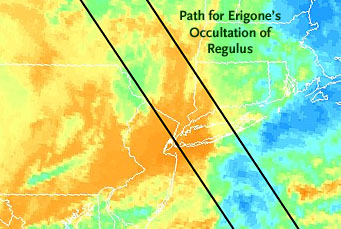 An infrared satellite image shows the thick clouds that blanketed the Regulus occultation path across the Northeast U.S. in the predawn hours of March 20th. Such infrared images aren't good for revealing low clouds, which are roughly the same temperature as the ground beneath them. In reality, nearly the entire region was clouded over.

"I made the decision not to go to New York at all, due to the 100% socked in forecast for the entire Northeast," grumbles Indiana-based observer Dan McGlaun. "A huge weather disaster for a once-in-a-lifetime event, in my opinion."

The most intrepid occultation-chasers had tried to dodge the stormy Northeast by flying to Bermuda, parts of which lay in the path. But the weather there wasn't much better. "We had mostly clear skies during the 5 hours preceding the event, allowing time to set up and pre-point all of my systems at the various locations spread across Bermuda," recalls David Dunham, who heads the International Occultation Timing Association.

Then the conditions deteriorated at the spot where he settled in to observe the event. "Shortly after acquiring Regulus, clouds moved in, but the bright star only faded a little in those clouds and never disappeared." In other words, no occultation occurred at that location, which was 2 km inside the path's predicted northeast limit. "When I returned to Pompano Beach," he continues, "Tim Haymes said that the clouds were quite thick there so that Regulus was not visible with his equipment around the time of the occultation." Another of Dunham's remote camera setups recorded the star fading substantially amid the clouds — but never disappearing. "So, based on that," he concludes, "it looks like there was no occultation to be seen anywhere from Bermuda." (His full report is here.)

In fact, Dunham hasn't heard of anyone having seen the occultation from anywhere along the path. "Although there were a few breaks here and there," he says, "apparently none came at the right time in the right direction for anyone in or near the path in North America."

This was a big one to miss, but there's always "next time." IOTA members are already setting their collective sights on the next occultation, which is likewise unusual. On April 16th, Venus occults 3.7-magnitude Lambda Aquarii. It'll be interesting to see what happens as the star disappears and reappears through the planet's thick atmosphere. But there won't be a huge metropolis along the path this time: It mostly traces across the South Pacific, with limited visibility from New Zealand, eastern Australia, Fiji, Papua New Guinea, and some bits of the Caroline Islands and Micronesia. 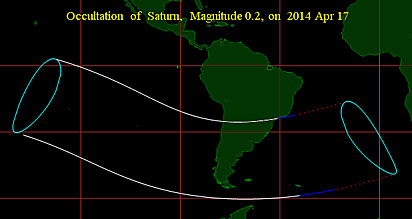 The Moon occults (covers) Saturn April 17th, as seen from a broad path that crosses the lower half of South America. Color coding: occultation occurs at moonrise or moonset (cyan), at night (white), in twilight (blue), and in daylight (red).

You can also look forward to an occultation of Saturn by the nearly full Moon one day later, April 17th. As the map here shows, it should be observable from the lower half of South America.

Thanks for the on-the-ground, under-the-clouds report, Kelly. My sincere condolences to everyone who hoped to see this remarkable occultation. I had briefly considered flying to New York to see this, but decided not to spend the money or burn the carbon for 14 seconds of hidden-Regulus.

I find this amazing that not one single observation was made of this event out of all the people in the path of this occultation. What are the chances of that?

Hoffelder's corollary (to Murphy's Law), rev 2: The probability of cloud cover at night is a) inversely proportional to the amount of moonlight in the sky, and b) directly proportional to the observer's level of interest in any celestial event, with the latter taking precedence when applicable.

Please note that "fail" is the first-person present tense of the verb "to fail.” The correct form that should have been used is the noun "failure." Unfortunately, the language used by Sky and Telescope is failing badly, with more and more inaccuracies being introduced. Just because the rest of the world panders to incompetence and stupidity does not excuse the failure to use correct language.

Dear Henrik, language evolves, both in pronuciation and grammar. The phrase "correct language" is an oxymoron. Formal languages can be defined, and they are useful tools, but they are layers imposed on natural language. I personally find the modern use of "fail" for "failure" a bit trend-oid and faddish, but calling it inaccurate is, well, "inaccurate". Referring to trends in language as examples of incompetence and stupidity is over-the-top --hyperbole. There is a time and a place for the use of the formal language layer (in any language), and everyone who hopes to succeed in the world must know it. That does not prohibit linguistic innovation and creativity. People who use "fail" as a noun are NOT "stupid" --but they may be more creative than you. In the sciences, scientific terminology has to follow exact rules, and we strive to maintain the meanings of scientific terms with as little drift as possible. That's why old, arcane words like "occultation" and even "declination" remain in use in astronomy. These technical words have exact meanings. This is a requirement of scientific communication, but it leads to hyper-sensitivity among many engineers and some scientists regarding language generally. And that's a mistake. Y'all shouldn't get up-tight about pop lingo (translation: ye durst not become dreadful of the argot of the mob). For science educators, linguistic "hipness" is a tough call: do we speak to the old, who are naturally more conservative about language (using such fine expressions as "these kids today"!)? Or do we speak to young people? Or worst of all, do we look like old men or women trying too hard to speak to young people and fumbling popular expressions in desperation? That, of course, would be the ultimate "fail".

Tom, ain't that the truth. i think the number of events i have missed because of clouds exceeds the ones i've seen by at least a factor of 10 to 1! and it's not like i was living in particularly cloudy areas.

The rarity of this Regulus occultation can not be over-stated. Only a handful of people on Earth have knowingly seen an asteroid occult a first magnitude star. There are no known earlier historical records of such events. How astonishing it was that this rare event might have been seen by tens or even hundreds of thousands of people. Instead, clouds... Kelly Beatty's article here mentions some upcoming "consolation prizes" but the next opportunity to see a first magnitude star wink out in a dark sky (and not with the same spectacular abruptness) will not occur for almost a dozen years, on December 12, 2023, when the star Betelgeuse will be occulted by the asteroid Leona. But in this case, the asteroid is a bit smaller and the star itself has a very large angular diameter so the star will fade out over some seconds and only completely disappear briefly. This will be a "fade out, fade in" occultation. That will be visible from central Turkey, through Greece, then near Palermo, then Gibraltar and crossing the Atlantic, finally passing near/over Andros Island in the Bahamas. But 95% of the narrow occultation path extends over the Mediterranean and the Atlantic Ocean... We just can't catch a break!