On Sunday morning, skywatchers in the Eastern Hemisphere have a chance to watch a waning crescent Moon slide in front of Jupiter and its Galilean satellites.

The predawn eastern sky has been a hubbub of celestial activity lately, with Venus and Jupiter headlining the show. 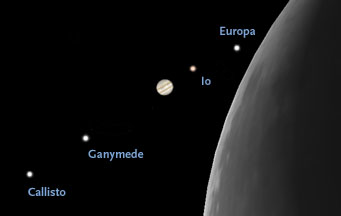 Parisians who train a small telescope on Jupiter well before dawn on July 15 (at 1:40 Universal Time) will see the planet and its four Galilean satellites about to be overrun by a waning crescent Moon.

While getting up so early might be a challenge for even dedicated skywatchers, there's an extra-special incentive for those in western Europe to jump out of bed before dawn on July 15th. On that morning you have a chance to watch something dramatic unfold in the eastern sky, as a very slender crescent Moon occults Jupiter. Sunday's event has added appeal because the four bright Galilean satellites will be occulted as well.

As the map below shows, the occultation is visible from a broad swath of the Eastern Hemisphere. The event begins about 1:30 Universal Time at its western limit and at roughly 4:00 UT in Japan near the eastern end. It's a daylight event for locations eastward of a line from Estonia through Saudi Arabia, but Jupiter is so bright (magnitude –1.9) and far enough from the Sun (45°) that is should be fairly easy to spot with a telescope. 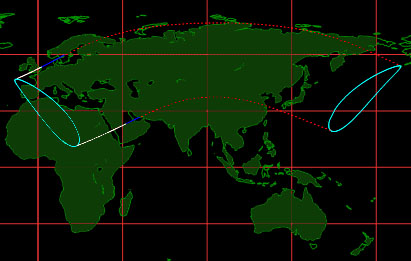 Anyone inside the broad arc has a chance to see Jupiter covered by the Moon on July 15, 2012. The map was generated using Occult prediction software.

The International Occultation Timing Association has computed when Jupiter disappears and reappears for more than 1,200 cities. Because the planet is currently 35 arcseconds across, its coverup and reemergence will be satisfyingly slow, taking a minute or more. In addition, Austrian observer Gerhard Dangl has calculated event times for the Galilean satellites as seen from dozens of European cities.

As occultation guru David Dunham notes, "England is especially well-suited for this event, with a spectacular partial occultation (graze) of Jupiter and its satellites at the dark northern edge of the thin crescent Moon before sunrise." Londoners are positioned to see the entire planet disappear behind the Moon, but those just 100 miles (150 km) to the northwest — in Birmingham, for example — see a near miss. Click here to view the path of the grazing encounter of the Moon and Jupiter across southern England, as calculated by celestial dynamicist Jean Meeus.

For North Americans, the occultation will be over by the time the two bodies rise in the east, with Jupiter 3° to 5° lower left of the slender lunar crescent.

According to Meeus, this is the second of a series of 10 lunar occultations of Jupiter in 2012 and 2013. The first, on June 17th, was visible only in northern Canada, and the last, next February 18th, will be visible in southern Australia. "Of these 10 occultations of Jupiter," he notes, "only the one on 2012 July 15 is visible in Europe." The third one, on August 11th, will be visible from Indonesia and the Pacific Ocean (with a daylight graze seen from Hawaii).

"The remaining seven events of the series occur in the Southern Hemisphere," Meeus adds. "No luck for the U.S.!"

Any chance this is within the HST view and capability?