Few stargazers bother to track down asteroids in the night sky, even though many of them are quite easy to spot. For example, in 2007 asteroid 4 Vesta passed unusually close to Earth and could be glimpsed with the unaided eye from a dark location. 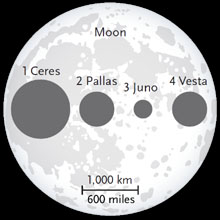 Although Juno was one of the first four asteroids to be discovered, it ranks 10th in size.

Right now you can look for another famous minor planet. Asteroid 3 Juno is having an especially favorable apparition, making it about a magnitude brighter than it usually gets. It's magnitude 8.2 on September 1st, 7.7 at opposition on September 21st, 7.8 on October 1st, 8.2 on November 1st, and 8.9 on December 1st.

According to Don Yeomans, manager of the Near-Earth Object Program at NASA's Jet Propulsion Laboratory, "This is going to be as bright as it gets until 2018."

Juno is positioned beneath the Great Square of Pegasus near the intersection of Pisces, Cetus, and Aquarius. This region of the sky is low in the east after evening twilight but higher up and better placed for viewing around midnight. 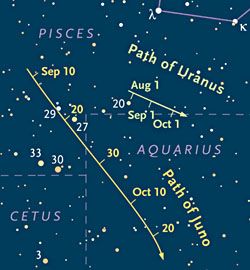 Juno (and Uranus) are easy to locate near the intersection of Pisces,Cetus, and Aquarius. Click on the chart to view or download a larger, black-on-white version.

German astronomer Karl Ludwig Harding first glimpsed Juno in September 1804, only three years after the discovery of the first asteroid, 1 Ceres. Yet it was a lucky find. With a diameter of 145 miles (234 km), Juno is only the 10th largest asteroid, and it's by far the smallest of the four found from 1801 through 1807.

After that no others turned up until 1845, long enough for the idea of "four minor planets" to become entrenched in astronomy literature. In fact, astronomers of that era considered Ceres, Pallas, Juno, and Vesta part of the Sun's planetary retinue and even assigned them planetary symbols. 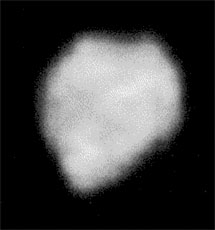 The spectrum of Juno suggests that it's composed of silicate rock, and dynamicists believe it is the source of many of the meteorites that rain on Earth. Several years ago astronomers used adaptive optics to record Juno at several wavelengths with the 100-inch Hooker telescope atop Mount Wilson. It's an intriguingly lumpy body, and apparently parts of it have been chipped away over the eons by collisions with other asteroids.

A NASA spacecraft named Dawn is en route to Vesta and Ceres, but it might be a very, very long time before we get close-up views of Juno. So take advantage of this window of opportunity to add another famous celestial object to your "life list."

Great article! I'll be trying to spot it as soon as my skies clear. I've never spotted an asteroid before, but if this one is truly naked-eye then I stand a good chance with my 16X Binoculars. I also have a Galileoscope that I can try with.

Great article, but i have a query that will it be visible with a "8 inches" or not. I will be grateful if someone can tell me about this. Please send your reply at aman_goel_2007@yahoo.co.in.

To Aman,
3 Juno should be visible in a pair of good quality binoculars, provided you know exactly where to look w/ an aid of a good quality star chart of the region of sky that 3 Juno is currently located in. Also it helps alot if you can locate and observe 3 Juno from a very dark location away from city lights, and preferably from a spot w/ no lights anywhere nearby.

To Gary Timothy,
3 Juno is NOT a naked eye object, it will require a pair of good quality binoculars to be able to see it, provided you are viewing from a very dark location w/ no lights of any kind nearby. Your 16X binoculars, and galileoscope should be more than adequate for finding 3 Juno, but be sure to be armed w/ an accurate star chart of the region of sky that 3 Juno is currently located in, to aid in hunting for the asteroid.

I always wanted to spot something cool in the sky, i saw jupiter last knight at 675X because it is so bright in New brunswick canada!

I believe it says VERY CLEARLY,"Click on the chart for a larger, black-on-white chart that you can use with binoculars or a small telescope" on the article...people read without seeing the data! Â¿How can they observe the sky? So much more complex... 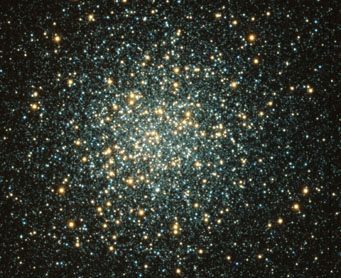