Having reached opposition on January 5th, our solar system's biggest planet is still a captivating sight. Learn some amazing Jupiter facts below!

If it's Mars, you certainly have lots of company. The fascination with the Red Planet as a possible abode of life goes back well over a century. But Mars is almost always tiny in a telescope, and when closest to Earth this April it's not going to be placed particularly well for viewing. Or perhaps you're fondest of Saturn. Nothing compares to those wonderful rings. 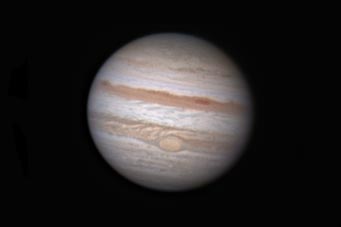 For me, however, it's Jupiter. What makes Jupiter such a treat is that it offers more to see in a telescope than any other planet. It's the only one that shows distinct features in even a fairly small scope. And it's got four large moons that hover nearby like bright fireflies, forever shuttling back and forth around Jupiter's glaring globe.

Some interesting Jupiter facts: Jupiter was king of the gods in Roman mythology, and as 2014 began it ruled unchallenged as the brightest "star" shining in the evening sky. Right now, you'll find it dominating the eastern sky in early evening — by late March, Jupiter's early evening position will be due south and high up.

Before you track down this planet with your telescope, grab your binoculars and find a tree or wall to brace against while pointing them toward Jupiter. If your binoculars are good quality and magnify at least seven times (they'll be marked 7×35 or 7×50, for example), you'll see Jupiter as a tiny white disk.

Look closely to either side of Jupiter's disk—do you see a line of three or four tiny stars? Each of these is a satellite of Jupiter roughly the size of our own Moon. They only look tiny and faint because they're about 2,000 times farther away.

Now put a low-power eyepiece in your telescope and center Jupiter. Focus carefully so that the planet's edge is as sharp as possible, let any vibrations settle down, and then take a good long look.

Jupiter and three of its four Galilean satellites, as they would appear in a small telescope.

Depending on the size of your scope and the quality of the night's seeing, you'll see something like the view here. Now the moons are much more obvious. You'll probably see all four — but possibly only three depending on when you look. The count often changes from night to night (or if you're patient, even from hour to hour). That's because while orbiting Jupiter they sometimes glide in front of the planet, behind it, or through its shadow.

These hide-and-seek movements confounded Galileo Galilei when he first spied these "stars" in 1610. But he soon realized they were actually circling around Jupiter, forming a miniature solar system of sorts. We see their orbits almost exactly edge on.

Almost any kind of Jupiter observation requires familiarity with the correct names for the various belts and zones. This diagram shows north up, but the view will appear inverted in a Newtonian reflector, or in a refractor, Schmidt-Cassegrain, or Maksutov used without a star diagonal. (When a star diagonal is used, north will be up but east and west reversed.) The planet's rotation causes features to move from east (following) to west (preceding). Click on the image for a larger view.

The four are named Io, Europa, Ganymede, and Callisto — or, collectively, the Galilean satellites — and it's hard to tell which is which just by looking. Callisto is usually (but not always) farthest from Jupiter, and Ganymede is a little brighter than the others. Sulfur-coated Io has a pale yellow-orange cast. Still not sure? The answers are just a mouse clicks away, thanks to SkyandTelescope.com's handy guide to identifying the Galilean satellites at any time and date.

Now turn your attention to more Jupiter facts. Center its round disk in the middle of your telescope's view, then carefully switch to a higher-power eyepiece and refocus. Study the disk closely, and two things should be noticeable. First, the disk is not perfectly round. Jupiter spins so fast (once every 10 hours) that its equatorial midsection bulges out a bit. It's 7% wider across the equator than from pole to pole.

Jupiter is a gas-giant planet — it consists almost entirely of hydrogen and helium, nearly all the way down. The "surface" you see is actually the top layers of cloud decks floating near the top of an immensely deep atmosphere. 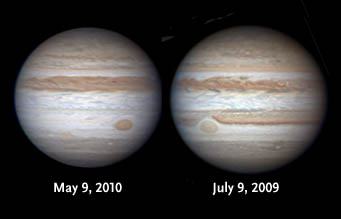 In 2010 observers were surprised to find that Jupiter's South Equatorial Belt had completely disappeared over a 10-month span — leaving the Great Red Spot quite easy to glimpse. But since then the SEB has returned.

Look for at least two tawny-colored stripes running parallel to the equator. These darkish cloud bands are called belts, and the brighter cloud areas between them are called zones. The North and South Equatorial Belts, usually the most prominent, straddle the bright Equatorial Zone like a cream-filled cookie sandwich. If you're using at least a 6-inch telescope, you may be able to pick out a few belts and zones closer to Jupiter's poles.

More Jupiter facts includes the single most famous cloud feature on Jupiter is the Great Red Spot, an enormous, oval-shaped storm about twice the size of Earth. Astronomers have observed the Red Spot for at least 150 years, but there's still no agreement on what chemical compounds create its distinctive color. Like any big storm, the spot changes appearance over time. The intensity of its color has sometimes been brick red (very rarely), pale orange tan (more often), pinkish tan, or an almost invisible creamy yellowish. Changes usually happen over a year or two.

When the spot is so pale as to be invisible, you may be able to identify it indirectly by noting the indentation it makes in the south edge of the South Equatorial Belt: a feature dubbed the "Red Spot Hollow."

Be forewarned that seeing the Great Red Spot is a challenge in a small telescope. Your best prospects will be when the spot appears near the middle of Jupiter's disk — SkyandTelescope.com's online calculator helps you know when to look. The planet's rapid rotation means that these windows of opportunity last only a couple hours, so be prepared to search for the spot over several consecutive nights.

No matter how you look at it, Jupiter is so easy to see that it makes an irresistible telescopic target anytime it's visible in the night sky — and that's why it's my favorite planet.

Very nice image Sean! Lots of wind in Arizona last night, could not even resolve the largest moon Ganymede. Noramlly with our 12 inch we can usually see the polar caps on this moon. Maybe tonight...

Hi,
Where to spot Jupiter in the southern hemisphere.
Thx

Yes, I'm sure the cloud-tops of Jupiter truly are a sight to see...but the cloud-bottoms here on Earth (over Kentucky, at least!) are making Jove's features impossible to see!! Blaming our neighborhood groundhog!

Two Space Probes to Pass by Venus Next Week