If you're up in late evening on Thursday, March 28th, check out the brilliant, nearly full Moon and its two lovely attendants: the ringed planet Saturn and the icy-white star Spica.

Just about every night, after the 11 o'clock news and just before heading off to bed, I take a moment to walk outside and look up into the sky. If it's clear, there's always something worth seeing. Last Sunday, for example, I was greeted by the close pairing of a crescent Moon and Jupiter. Lovely, indeed! 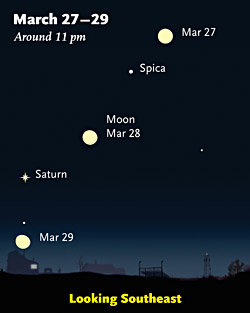 Late on March 28th, the nearly full Moon is situated halfway between Saturn and Spica for observers in the Western Hemisphere.

If it's clear on the night of Thursday, March 28th, I'll be on the lookout (and you should too) for a just-past-full Moon perched midway between the icy-white star Spica to its upper right and creamy-hued Saturn to its lower left. This grouping won't be particularly tight — Saturn and Spica are currently 17° apart, about twice the width of your fist at arm's length — but it will still look nice.

This wide spacing actually helps you take in the trio. Ordinarily such a big, fat Moon would wash out anything in its vicinity. But Spica is no slouch: it's a 1st-magnitude blue giant. Saturn reaches opposition late next month, so it's already a half magnitude brighter than Spica. Look for the trio after 11 p.m., after they've had some time to clear the eastern horizon and are well up in the southeast.

Were I on the other side of the world (say, in Mumbai, India), the Moon would appear dramatically close to Spica on the 28th and just 3° from Saturn the next night. In fact, the Moon actually occults (covers up) Spica beginning around 13h Universal Time as seen from much of southeast Asia and northern Australia. Details are available here.

For the rest of us, March 28th's celestial sandwich will simply be a nice moment to enjoy. Reflected sunlight takes about 1¼ seconds to reach us from the Moon's bleak, dusty surface. For Saturn, now just under 9 astronomical units (830 million miles) away, the travel time is 74 minutes. And the light from Spica, a star that shines 12,000 times brighter than our Sun, has been traveling about 260 years — since well before the American Revolution.

Just checking - when you say 11pm, what time zone is that?
thanks M

That would be 11pm in each time zone, since it's not an exact time, but only once the Moon, Saturn and Spica have risen above the horizon at your location.