Even if you can't seen the Moon occult Spica from your location, it's worth catching the duo as they pirouette.

Just in time for the Northern Hemisphere’s summer barbeque season, Spica (whose name means “ear of corn”) will put on a show with the first-quarter Moon on July 15th and 16th. From the middle of North America the pair will be less than two degrees apart in the late evening sky on the 15th. If you watch over the course of a few hours from these latitudes (a little less than 40° N is ideal) and have a good view of the western horizon, you will see the bright blue-white star arc up and over the Moon from left to right as both dive after the long-faded sunset. 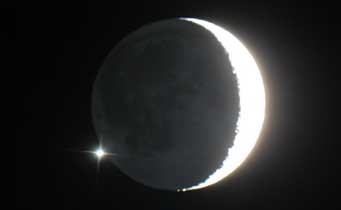 S&T gallery contributor Catalin Timosca submitted this photo of the Moon's 2008 occultation of Venus as seen from Turda, Romania. Although Spica will be a pale imitator of Venus, it will still make a beautiful pair with the first-quarter Moon on July 15th.

For those at lower latitudes in the Americas, the passage will be even closer, becoming a full occultation for a swath of the Pacific Ocean, Mexico, Central America, and South America. Unfortunately the occultation comes close enough to moonset that catching it will be difficult to impossible for many observers. Among those best positioned are skywatchers in Ecuador, Guatemala, and southern Mexico — but anyone in the French Polynesian islands has the world beat: the whole event will take place one or two fist widths below the zenith. I'd be interested to hear if anyone catches it from Hawaii: the sky will still be bright, but the occultation will start about 40° above the horizon.

Spica is a first-magnitude star and one of the twenty brightest stars in the sky. The Moon will lead with its dark half when occultation begins, as in the above photo of the Moon occulting Venus in 2008, taken from Romania by reader Catalin Timosca. (Of course, the lunar phase will be more advanced for the 15th's event and Spica will be something like one-fiftieth as bright as Venus was, but the photo gives you the gist.) You might want to grab a pair of binoculars or a low-power telescope to help you fully enjoy the sight.

The nitty-gritty details — with occultation map, times of disappearance and reappearance (in universal time), and where to look in the sky if you're among those who can see the occultation — are on the International Occultation Timing Association’s website.

You can check out our interactive sky chart for a rough sense of where to look from your inputted location. You can also read more about observing occultations in our observing section.