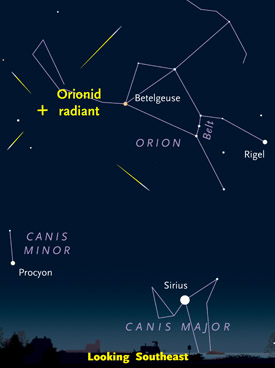 The Orionid meteor shower peaks in late October, but the best views won't come until 1 a.m. (as depicted here) or later, after the shower's radiant has risen well up in the eastern sky.

As Earth wheels through the October portion of its orbit around the Sun, our planet passes through two reliable annual meteoroid streams: one fast, one slow, both long-lasting.

The Orionids are created by the arrival of fast-moving bits of Comet 1P/Halley, as are the Eta Aquarids of May. That's because the same meteoroid stream crosses Earth's orbit in two places. The Orionids reach an irregular peak from about October 20th through 24th, though some are seen from mid-October into December.

Historically the Orionids have produced about 20 swift meteors per hour in a dark sky before dawn, but from 2006 to 2009 the shower was richer, with zenithal hourly rates of 40 to 70 per hour on two or three consecutive nights.

This is definitely a celestial event for early-risers. The shower's radiant, in the top of Orion's club, doesn't rise high until the hours before dawn. By that time the roughly first-quarter Moon will have set.

The Taurids are slow, graceful meteors that originate from the unusually short-period comet 2P/Encke and other objects that seem to be ancient Encke breakup products, including the dormant, asteroid-like comet 2004 TG10. Consequently, the Taurid stream is very broad and its shower exceptionally long-lasting; it runs from October through early December. It has two distinct portions, the Northern and Southern Taurids, and the latter reach full strength first. In terms of numbers, the Taurids are not exciting. A careful counter might log about a half dozen per hour from late October through November under ideal observing conditions. But at least you don't have to go out at a predawn hour; the radiants in Taurus reach a high altitude by late evening in October and a couple of hours earlier in November. 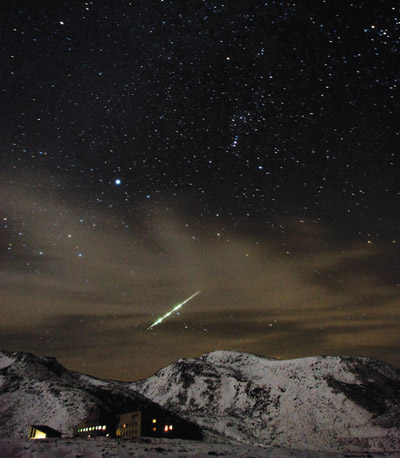 A Taurid fireball showed through thin clouds over Toyama, Japan, on October 28, 2005. The brightest star is Sirius. Orion is near upper center, and near the top right corner are Aldebaran and the Hyades in Taurus.


NASA / Hiroyuki Iida
What's exciting about the Taurids is their occasional dazzling fireballs. In late October and early November 2005, numerous "Halloween fireballs" made news around the world. In fact, the brightest meteor in recorded history — the several-megaton Tunguska explosion on June 30, 1908 — might have been a Taurid. (At that time of year Earth passes through a different part of the same meteoroid stream, causing a daytime shower.)

The behavior of Taurid meteoroids in the upper atmosphere shows them to be denser and more rock-like than the fluffy, fragile dust clods that account for most meteors with cometary origins. So if you see a grand fireball during these next several weeks, trace its path backward across the sky and see if the line intersects Taurus.

It's no coincidence that this year's second Astronomy Day coincides with the Orionids meteor shower.

To celebrate Astronomy Day, I'll be broadcasting an 11hr marathon of live astronomy on Saturday (starting at 12:30PM PDT and ending at 11:30PM PDT).

We'll be watching for Orionid meteors in the observatory AllSky camera while we also watch live colour images of comets, asteroids, the planet Jupiter and its moons, galaxies, nebulae, supernovae remnants, and just about every other type of celestial object!

I'm not sure why S&T aren't writing about Astronomy Day, but hopefully people will discover that there are a number of events to celebrate it. It's always a fun day which lives up to its tagline "Bringing astronomy to the people".

I can be contacted at [email protected]
.