Venus is passing through the Pleiades in a breathtaking spectacle that reaches its peak this evening, April 3rd. This unique pairing is part of this year’s series of spellbinding Venus events, from the planet’s recent conjunction with the Moon and Jupiter to its upcoming transit of the Sun in June. 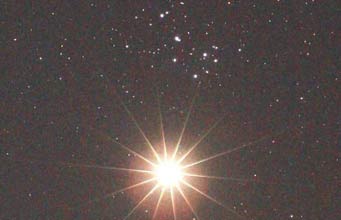 Jean-Claude Merlin caught this photo of Venus and the Pleiades on April 2nd.

As Alan MacRobert points out in his weekly Sky at a Glance column, Venus will be just ½ ° southeast of Alcyone (the brightest Pleiad) and ¼° south of the Atlas-Pleione pair, at least for observers from the Americas.

Last night, several of Sky & Telescope’s editors hosted a star party at a local middle school. We probably had upward of 100 kids, some fresh from practice and still in their athletic shorts (in 40-degree-Fahrenheit-weather, no less). While the craters on the Moon’s terminator and the Galilean satellites wowed students and parents alike, Venus’s pairing with the Seven Sisters really lit up the night.

The combo is visible to the naked eye after sunset, but it’s even better in a pair of binoculars or a small telescope. The celestial pinpricks shone fabulously in my colleague’s 70-mm at 16×; they also looked great in 10× binos. You can use more telescopic power if you wish, as long as you can still fit both Venus and the Pleiades in the field of view — below 20× or 25× should be fine.

If you catch a nice shot of Venus and the Pleiades, please submit your photo to our online gallery.