The crescent Moon is always an ethereal sight, but on January 12th and 13th you’ll have the chance to see it with another well-known object when it passes within a fist’s breadth of Mars. 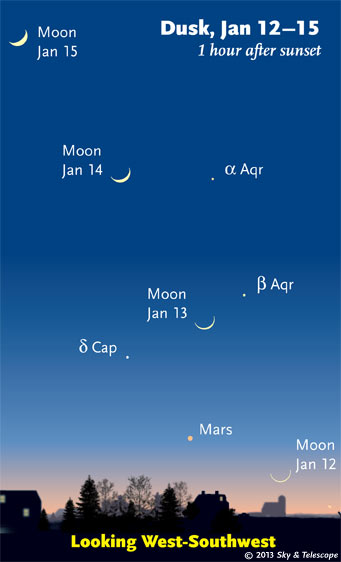 The waxing crescent Moon appears higher each evening as it grows. On January 12th and 13th it passes within 10° of Mars.

Catching the pair might be a little tricky because they appear together shortly after sunset, not far above the horizon. If you look too early, the Sun will swamp the view. At the moment Mars is also pretty dim (for a planet) at magnitude 1.2. If Mars were high on the stellar dome, spotting it at that magnitude would be easy-peasy — but when low in the sky and hiding in the Sun’s afterglow, it’s much harder.

Fun fact: Right now Venus is 100 times brighter than Mars. If you followed the Moon as it floated past Venus before sunrise on January 10th, you’ll definitely notice the difference between that conjunction and this one. (Not to mention Venus was about one quarter the distance from the Moon that Mars will be.)

The most important thing you’ll need for watching this Mars-Moon encounter is a clear view of the western horizon, either from an open field or a hill. Short trees are okay, as long as they only reach a couple of finger widths above the horizon. Even low-lying clouds — as pretty as they might be when lit up by the slumbering Sun — will kill the view. Start 30 to 40 minutes after sunset and keep looking as the sky grows darker.

To find Mars on Saturday the 12th, set your fist on the horizon just left of the Moon and look near the top of your fist. On Sunday the 13th, the Moon will be about the same distance from Mars but straight above the planet instead. Mars’s red color will show up better in binoculars, especially if you compare it with the star Fomalhaut, which shines roughly three fists away to the upper left of the Red Planet. Fomalhaut is famous for its giant, Sauron-eye-esque dusty ring and its hotly debated exoplanet. Astronomers have disagreed for several years about whether the planet Fom b exists, but the evidence may be converging in favor of the planet’s existence.