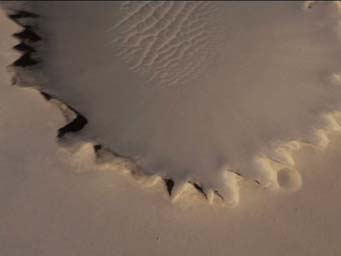 Now that the dust storms have passed, the Mars Exploration Rover Opportunity should begin studies inside Victoria Crater in the coming weeks.

One reason I love living in Boston is we're surrounded by elite universities. They draw elite speakers, so in any given week there are plenty of great scientific talks you can walk in on. For example, last week the Mars Exploration Rovers' principal investigator, Steve Squyres, happened to be speaking over at MIT. So naturally I dropped by to hear the latest news regarding the rovers.

In short, things are looking up and up. The dust storms that nearly killed the rovers during the last two months are a thing of the past. The Martian atmosphere continues to clear, and as it does, the available solar energy continues to rise.

As for operations, Opportunity has finished its survey around half-mile-wide Victoria Crater, and mission specialists have found what they think is a smooth, safe route into — and out of — the cliff-lined impact scar. Over the next couple of weeks the rover will gingerly creep down inside, making certain that the selected path is indeed safe. Once inside, rover scientists plan on taking up-close looks at the layered stratigraphy of the bedrock in the cliffs.

The journey is somewhat risky, however. If just one of the six wheels fails, Victoria Crater will be Opportunity's final resting place. There is also concern that the thermal-emission spectrometer (Mini-TES) aboard Opportunity may be dead. Test are underway to see if that instrument is indeed lost.

Meanwhile at Gusev Crater, halfway around the Red Planet, Spirit is doing well too. Still limping along with a broken wheel, the rover will continue its analysis of Home Plate, a wet-volcanic formation in the Columbia Hills. Scientists continue to find a wide diversity of rock types in the area; one of the most intriguing ones contains more than 90 percent non-crystalline silica.