Yet another adventure is about to begin for NASA’s Mars Exploration Rover B, more famously known as Opportunity. The golf-cart-size, solar-powered vehicle reached the outer hills of its new destination, Endeavour crater, on August 9th after a 3-year, 13-mile (21-km) trek across the flat Martian terrain from the previous big crater it explored, Victoria. 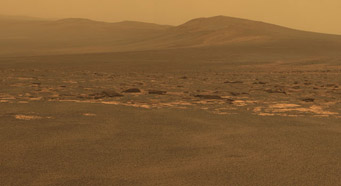 A portion of the west rim of Endeavour crater sweeps southward in this color view from NASA's Mars Exploration Rover Opportunity. Click for full-size image. It shouldn't be long until Opportunity is peering over the rim inside.

The site from which Opportunity radioed Earth has been named “"Spirit Point,” in memory of its smaller twin, Spirit, that collected data on Mars from January 2004 to March 2011.

Launched in 2003, both Spirit and Opportunity were expected to complete a 90-Martian-day mission; instead, Opportunity has endured 30 times longer and traversed a total of 20.81 miles. Since touching down south of the Martian equator on January 25, 2004, the rover has explored five craters: Eagle, Endurance, Erebus, Victoria, and Santa Maria.

Endeavour, its new destination, is huge: 14 miles (22 km) wide — 25 times as large as Victoria, whose geology the rover studied for two years. A spectrometer aboard NASA’s Mars Reconnaissance Orbiter has detected clay minerals inside Endeavour, which likely formed during a warmer and wetter period on the Red Planet.

Mission scientists will next choose the safest way to have Opportunity descend into the crater. There’s no word on how long they expect this epic exploration to last.

However, we do know that Opportunity's larger successor, Curiosity, will soon be launched on its way to Gale crater on another side of Mars.

Opportunity making it to Endeavour Crater is simply epic. Kudos to the team for nursing her to her destination. In my mind, the rovers represent the very best that NASA and the science community can accomplish when given the chance. Well done.

I have never heard that "Opportunity" rover's twin "Spirit" is "smaller". I thought they were basically identical.