It's now Day 2,923 of Opportunity's 90-day-long mission to explore the Martian surface. 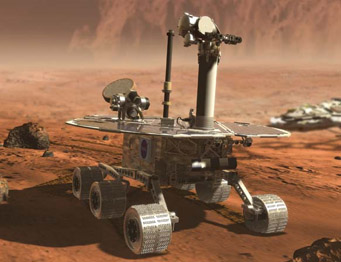 With a mass of roughly 400 pounds (180 kg), NASA's twin rovers, Spirit and Opportunity, were designed to operate for at least three months on the Red Planet. Each carries a suite of five instruments, collectively called Athena, and an abrasion tool for exposing fresh surfaces on rock faces.

Eight years ago today, this golf-cart-size vehicle thumped onto Meridiani Planum just three weeks after the arrival of its twin, Spirit. Assembled and launched on a tight schedule in response to the loss of NASA's two previous Mars missions, the rovers were equipped with cameras and spectrometers to help geologists learn whether and where water had coursed over the ruddy surface. The baseline mission for each was just 90 sols (Martian days) long.

Not even the most optimistic proponent could have foreseen that Opportunity would still be working — and fully functional — after all this time. Yet, in a way, this half of the mission was lucky from the start: it plopped right into a small crater full of easily accessed outcrops and scads of little round "blueberries" (hematite nodules) created in a watery environment long ago. 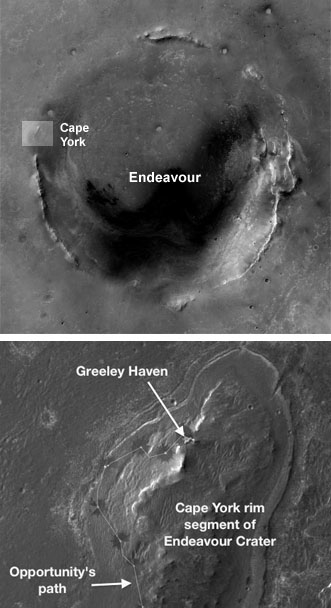 Opportunity reached Cape York, on the western lip of Endeavour crater, in August 2011. It will spend the winter on a sunward-facing outcrop named Greeley Haven before resuming its exploration of the ancient, 14-mile-wide crater. The lower panel, recorded by the HiRISE camera on NASA's Mars Reconnaissance Orbiter, is about 1,400 feet (430 m) across.

Today "Oppy" is perched on a rocky outcrop called Greeley Haven, a destination on the rim of Endeavour crater that the rover reached last August. To get there, it traversed 13 miles (22 km) over three years.

Now Martian winter is coming and, with it, diminished sunlight for the dust-covered "wings" that provide the craft with electricity. As a precaution, ground controllers have placed Opportunity on a sunny slope and tilted it for better solar exposure. It will remain there for several months until the Sun's rays start to strengthen in spring. (Spirit, located closer to the polar region, didn't survive the previous winter and has been silent since March 2010.)

Even while motionless, Opportunity will be pushing the boundaries of Martian science. "The top priority at Greeley Haven is a radio-science campaign to provide information about Mars's interior," says Diana Blaney, deputy project scientist, in a Jet Propulsion Laboratory press release. Doppler shifts in the rover's radio beacon provide a sensitive way to measure the wobble in the planet's rotation and, from that, an indication of whether the Martian core is molten. 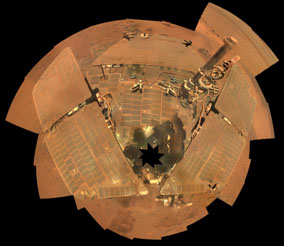 Although Opportunity continues to function well, the tops of its solar-cell panels have become very dusty — which diminishes their ability to produce electricity. The images for this self portrait, taken in December 2011, were assembled by mission aficionados James Sorenson and reprojected by Doug Ellison. Click here for a larger version.

With a diameter of 14 miles (22 km), Endeavour is big and rich with geologic promise. Orbital scans suggest that it's an ancient feature with clays and other water-influenced compounds in its rim and basalt-rich deposits on its floor. The project team is eager to start exploring these with their seemingly indestructible rover.

In a sense, Opportunity has just begun a brand new mission — and I wouldn't be surprised if we'll be celebrating a new wave of discoveries — and the ninth anniversary of its landing — a year from now. By then it'll have some company: Curiosity, NASA's Mars Science Laboratory is now en route and should descend into Gale crater on August 6th.