Someone once said, "Opportunity knocks only once, but temptation bangs on your door for years." And ever since NASA plopped twin rovers onto the ruddy surface of Mars in early 2004, mission scientists have exploited the longevity of their mechanical marvels to explore ever-wider swaths of Martian real estate. 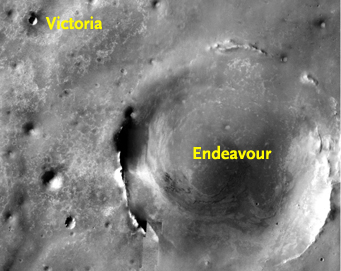 An orbital view of Victoria crater, which Opportunity explored for more than a year, and much larger Endeavour crater, where the rover is now headed. Endeavour is about 14 miles (22 km) across and 1,000 feet (300 m) deep. This scene is a mosaic of about 50 images captured by the THEMIS instrument aboard Mars Odyssey.

The rover Opportunity, in particular, recently wrapped up an entire year of scientific prospecting along the rocky inner slopes of Victoria crater — after rolling 4 miles (6 km) to get there. Measuring 2,400 feet across and about a tenth as deep, Victoria provided a ready-made "road cut" in the upper crust that allowed geologists to peer back into recent Martian history.

Now rover-meister Steven Squyres wants to dispatch Opportunity on an even more audacious undertaking: a 7-mile (12-km) trek to an even larger crater named Endeavour. It's about as far away as the entire distance that the rover has traveled to date, and the craft is already well past its 90-day warranty.

But reaching (or even nearing) 14-mile-wide Endeavour would provide a scientific boon, since the impact that created it undoubtedly unearthed countless rocks from deep crustal layers and lobbed them onto the surrounding terrain. Squyres also points out that heading south, toward that big pit, is where Opportunity would be heading next anyway.

The craft is in excellent shape, though there's a balky motor in the shoulder joint of its instrument-tipped robotic arm. And it'll have two advantages that should make the going easier. One is the eagle-eyed Mars Reconnaissance Orbiter, whose High Resolution Imaging Science Experiment (HiRISE) camera can record surface details smaller than the rover itself. The other is new onboard programming that helps the both rovers optimize their routes to avoid hazards such as sand dunes.

Still, Opportunity will have to hustle to reach Endeavour. Even clipping along at 110 yards per day, engineers estimate that the journey could take two years.

By the way, NASA's exploration of Mars was featured last week on National Public Radio's "Talk of the Nation: Science Friday." If you missed the broadcast, you can listen to streamed audio here.

Bring on Endeavour crater! No mission more embodies the spirit of exploration as the MER mission. Onward!

I still am amazed that these rovers are still working. Whomever was involved in building them should be as proud as they can for a job very well done indeed.