Past Meets Future at AAVSO's Centennial

With speeches, cake, memories of decades long gone, and excitement about the very different data-rich decades to come, more than 100 people took time from the annual meeting of the American Association of Variable Star Observers to celebrate the AAVSO’s 100th birthday at its headquarters October 6th.

Plans and prospects. The meeting room at AAVSO headquarters looks a lot better now than it did as Sky & Telescope's old shipping department. Click image for larger view.

For us Sky & Telescope long-timers, it was a case of going home again. Literally. The AAVSO now occupies the main building on Bay State Road in Cambridge that S&T inhabited from 1956 to early 2007. Frankly, they’ve done a better job with the building than we did. It’s spiffier on the outside and better appointed on the inside. Practically every wall bears portraits of esteemed AAVSO forebears, well-kept shelves of astronomical journals and boxes of astronomers’ papers back to the 19th century, and display cases full of variable-star memorabilia. Less visible is the organization's heart: the 20,765,490 variable-star measurements in the AAVSO International Database as of this morning. Our October issue summarizes the AAVSO’s evolution and success through the last century. 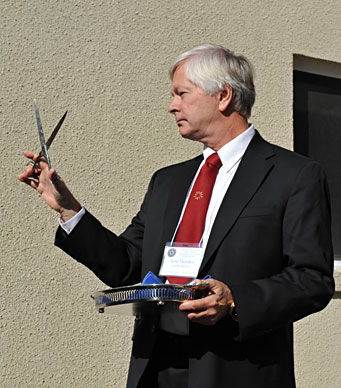 AAVSO director Arne Henden with the Margaret Mayall scissors. Mayall directed the AAVSO from 1949 to 1973 and kept it alive through its expulsion from Harvard in 1953.

The reverence here for astronomical history came out in abundance yesterday, in everything from the scissors used for a ribbon-cutting (the scissors with which Margaret Mayall cut some 50,000 comparison-star charts to mail to observers, over a span of decades when a long-forgotten printing method required this), to the 100 years of data points forming a long printout winding all the way around the top of the meeting room’s wall. The printout was a newly extended light curve for the cataclysmic variable star SS Cygni since 1911, the year when lawyer and astronomy writer William Tyler Olcott founded the AAVSO in support of Harvard College Observatory.

But also hanging over the room was the knowledge that the old days and old ways are fast disappearing.

Eyeball estimates of variable stars’ brightnesses, which most people in the room had done for a good part of their lives, are on their way to becoming as obsolete as vacuum-tube radios and rotary-dial telephones. Serious variable-star observers now use CCD cameras or photometers to make measures that are much more precise. But even bigger changes are coming.

So I was relieved to see the energy with which the AAVSO's leadership is planning to create a central role for the organization in the coming century of automated sky surveys — when robotic observatories will routinely track the brightnesses of every star in the sky to far fainter than amateurs can do for even one. The day is on the horizon when, for instance, the planned 8.4-meter Large Synoptic Survey Telescope (LSST) should gather more star-brightness data each night than all the AAVSO’s eyeball estimators have done in a century. (The LSST is supposed to start work late this decade, but its construction is not yet fully funded.) 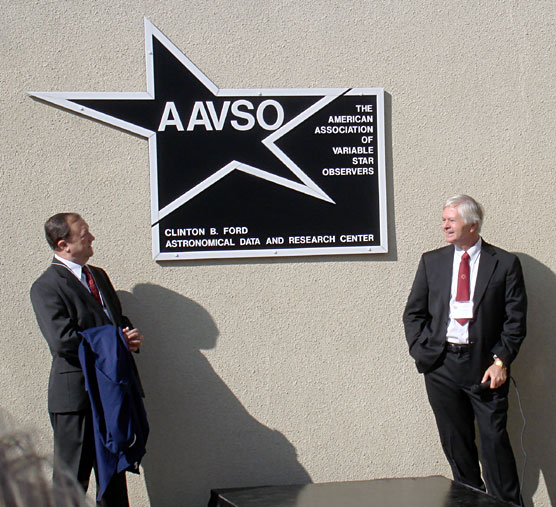 The AAVSO's old wall sign, salvaged and newly installed on the current building, was unveiled by Henden (right) and former president David B. Williams before a crowd at the AAVSO's 100th anniversary celebration, October 6, 2011.

Addressing this impending sea change was Charles Alcock, director of the Harvard-Smithsonian Center for Astrophysics a mile up the street (which incorporates the old Harvard College Observatory). Alcock told the crowd that floods of sky-survey data already outstrip astronomers’ ability even to look for what they contain beyond the needs of a specific project. Such data sets are full of objects that deserve the individual followups that well-equipped amateurs can do.

As a case in point, he told of his own involvement in one of the MACHO surveys: the first hunts for gravitational lensing among stars. As a byproduct, the MACHO surveys have discovered vast numbers of new variable stars within their fields of view and have produced a staggering set of top-quality, standardized light curves for these stars. “Seen in these surveys,” Alcock said, “were many exotic, puzzling variable stars that never really saw the light of day. This will be a greater problem in the era of the LSST.”

In the future, massive star data from disparate projects will need to be archived in a consistent way and made accessible to data miners. And, large numbers of small-telescope users equipped with photometric CCD cameras — and, soon, spectrographs — will be needed to perform quick followups and long-term studies on fast-paced or mysterious objects. “The amateurs of the world,” Alcock said, “will have a great opportunity.”

He summed up with three points:

“I think variable-star astronomy is even more important than it was a century ago.

“New technologies will continue to expand and transform the field.

“There will be abundant new opportunities for members of the AAVSO.”

Rick Fienberg, S&T’s former editor in chief and now the press officer for the professional American Astronomical Society (AAS) in Washington, told the crowd that the AAS recently closed down its committee on amateur-professional collaborations. This, he explained, is good news. Amateur-professional collaborations on things like variable stars have become so routine that there’s no longer a need for a committee. “It astonishes me how many professional papers now routinely have amateur contributors as co-authors,” Fienberg said. He closed by pointedly congratulating the AAVSO for “the bright future you have as you move wholeheartedly into the digital age.”

Notes our current editor in chief, Robert Naeye, “It’s not at all obvious that an organization dedicated to variable star observing would have survived a century’s changes in people, methods, locations, purposes, technologies, and scientific needs. AAVSO’s accomplishments are extraordinary.”

My eyes kept going back to that century-long light curve of SS Cygni enclosing the room. The light curve is made of 470,504 dots. Get up close, and you can see each one separately. Each dot represents one observer’s act of faith — that determining SS Cyg’s brightness at some particular hour on some particular night long gone was worth going outdoors with the telescope and doing, as carefully as possible — in the faith that it might be of value for unseen purposes in unseen future ages. A lot of science is like that. The presence of the big crowd in the room as of 2011, looking both back to the archives and forward to new futures, was an affirmation for all those makers of the dots. 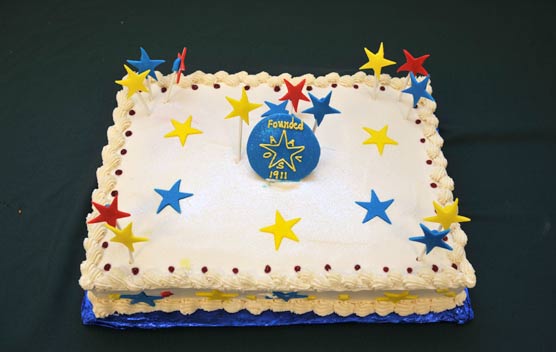 I was really surprised to read this: "Eyeball estimates of variable stars’ brightnesses, which most people in the room had done for a good part of their lives, are on their way to becoming as obsolete as vacuum-tube radios and rotary-dial telephones. Serious variable-star observers now use CCD cameras or photometers to make measures that are much more precise."

As a visual observer of variable stars, I know how valuable these observations are still considered by the AAVSO. In fact they are actively encouraging the ongoing visual observation of "heritage" stars in order to provide continuity and consistency in observations going back over a century. I'm glad that the AAVSO still considers me a "serious observer" even if Sky & Telescope does not!