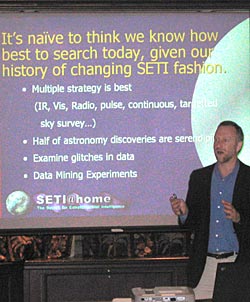 SETI@home's Dan Werthimer warned that our best guesses about how to search for signals from intelligent life in the universe may only divert us from signals that really exist.

Jodie Foster, in the 1997 movie Contact, made it look so easy. And now, with giant radio telescopes having scrutinized some 800 of the nearest stars for artificial signals, and with hundreds of thousands of home computers churning through radio data from all across the sky, you might think that the search for extraterrestrial intelligence, or SETI, would be pretty well along.

Think again. At an August 2004 symposium organized by The Planetary Society, leading SETI experts stressed that we've barely scratched the surface. Guillermo Lemarchand (University of Buenos Aires) put a number on our ignorance about alien signals. Several decades of radio searches, he described, have probed only a hundred-trillionth (0.00000000000001) of the "cosmic haystack" — the radio channels, sky directions, and other parameters that need to be searched for the "needle" of an artificial signal. 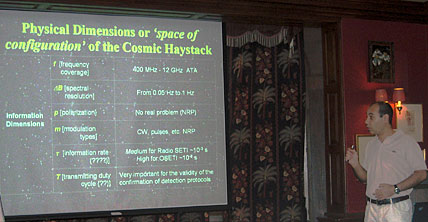 How much do we need to search before we can say there are no alien radio signals to be found? Guillermo Lemarchand estimated that we've searched only a hundred-trillionth of the 'search space' that needs to be covered.

The symposium, held at Harvard University, was titled The Significance of Negative SETI Results. "There is no news," admitted Bruce M. Murray, a Caltech professor emeritus who's been involved in SETI since the 1970s. Murray chairs the board of directors for the Planetary Society, which has fostered and funded various search efforts. So is the Society's money being spent wisely? 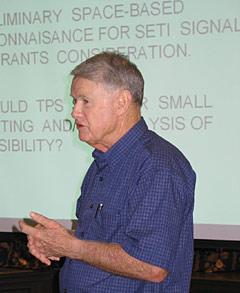 Planetary Society chair Bruce Murray pressed attendees for their ideas about course corrections that the world's SETI programs may need.

To put the lack of signals in perspective, Murray and colleague Bruce Betts brought together most of the field's top specialists for the day-long brainstorming session. Far from being discouraged, the workshop's attendees frequently reminded one another that their work has just begun. "We haven't done very much," admitted Dan Werthimer (University of California, Berkeley), who has spearheaded the wildly successful SETI@home grassroots effort. "Earthlings are just getting into the game — we can't rule out hardly anything."

But Murray repeatedly pressed the panel for specifics of what has been ruled out. Frank Drake, senior scientist at the SETI Institute, responded that no alien civilization appears to be continuously broadcasting a powerful "beacon" signal from a planet circling any of the nearest 1,000 or so Sunlike stars, at least in the frequency bands we've searched. If there were such powerful beacons, they'd have been picked up by Project Phoenix, an ambitious nine-year undertaking that the SETI Institute concluded in March 2004. (The SETI Institute's next big project, the Allen Telescope Array, is now under construction.) 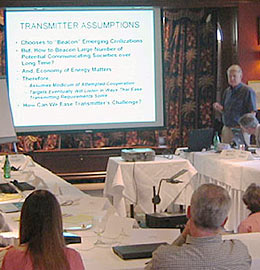 Fifteen of the world's SETI experts gathered at the Harvard Faculty Club for an all-day brainstorm on the search for alien signals among the stars. Click for full view.

Many people assume that we could eavesdrop on aliens' everyday communications. But this idea has little chance of success, said Drake. He notes that even 10-megawatt broadcasts, the most powerful on Earth, could be picked up only from stars a few light-years away even using Earth's largest dish. Meanwhile, our own technology is evolving toward more energy-efficient, point-to-point communications, rather than pumping ever more megawatts of radio power into the sky. "A hundred years from now," Drake predicted, "the Earth will disappear as a radio source." By extension, he says, the only aliens we're likely to hear are ones intent on deliberately signaling to emerging civilizations like us.

So how would an eager-to-talk civilization try to catch attention? One option would be to target promising stars — if not the whole Milky Way — with narrowband radio blasts. In that case, our task is to turn a radio ear toward as many stars as possible for as long as possible, listening at as many channels as possible simultaneously. Drake thinks that searching vast numbers of stars for very powerful transmitters, by wide-field sweeping, is a better bet than scrutinizing nearby stars for weaker transmitters by sensitive searches that are narrowly targeted. 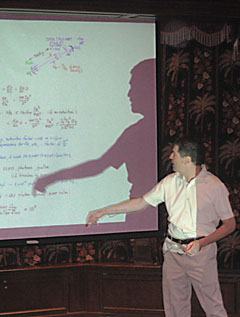 Harvard's Paul Horowitz working out the effectiveness of laser signaling between solar systems.

Despite the lack of results so far, there's a lot of excitement in the SETI community because search capabilities are increasing by leaps and bounds. SETI capabilities are growing at about the rate of "Moore's Law," which says the amount of computing power you get per dollar doubles every 18 months. Seth Shostak, senior astronomer at the SETI Institute, recently said that if Moore's Law continues to hold true, he thinks that we'll detect an alien communique within the next two decades.

But the workshop participants were less optimistic. "Maybe within 100 or 200 years," suggested Kent Cullers, the Institute's head of research and development. "Twenty years is too soon."

Not all SETI efforts are radio-based. Paul Horowitz and Andrew Howard of Harvard have built a 72-inch telescope west of Boston to conduct a wide-sky survey for very brief pulses of light that might be directed Earth's way. The most powerful lasers designed so far (such as the Laser Megajoule in France and the National Ignition Facility in the U.S.) can blast out nearly a million billion watts of light for a few billionths of a second. In that brief instant such a laser, aimed at our solar system through a 10-meter telescope on a distant planet, would far outshine the planet's host star. Detecting such brief pulses of light is technologically easy. The ability to do it will soon be built into high-end amateur CCD cameras.

"If they really want to contact us, they can," Horowitz said.

But, the conference participants stressed, we still don't know if we're watching or listening the right way. For instance, between radio and visible light there's a gigantic unexplored spectrum of infrared and millimeter-waves frequencies. There's reason to think these are the most efficient frequencies for interstellar communication. Perhaps the aliens have decided that anyone smart enough to be interesting will realize this, and are signaling there accordingly. But we can't search these frequencies well until we do can SETI from above Earth's atmosphere.

"Your best guess is your worst enemy," admitted Werthimer. "It's naïve to think that the searches we're doing today are the best ones." Instead, he advises, think serendipity. "We should all be looking for little glitches in our data." 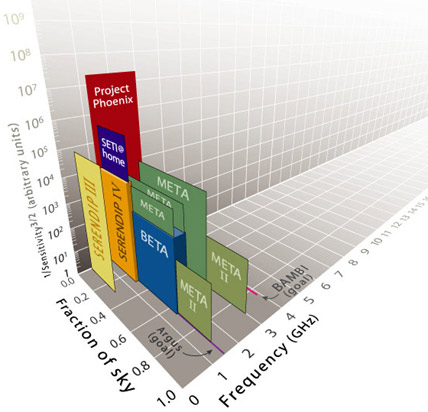 'Search space' of the major SETI programs. The three axes show the frequencies a project scans, how much of the sky it looks at, and its sensitivity. Clearly, you can't have it all. Every current (or planned) search is very weak in at least one of these three dimensions.

The sensitivity axis is scaled in units that indicate the relative number of stars examined in a given direction for an alien transmitter of a given power. The graph shows, for instance, that SETI@home (a narrow extension of Project SERENDIP IV) listens only near a frequency of 1.420 gigahertz, but that it surveys a greater volume of space at this frequency than has ever been looked at before.

There are more parameters to consider than the three graphed here — for example a signal's frequency drift, on-off duty cycle, and polarization. Plotting them all, says Jill Tarter of the SETI Institute, would require a 9-dimensional graph.