The Rosetta spacecraft and its lander, Philae (FEE-lay), have traveled for about 10 years and 800 million miles to catch up to Comet 67P/Churyumov-Gerasimenko. Soon they'll meet face-to-face.

After spending 957 days in electronic hibernation, the comet-chasing spacecraft Rosetta awoke earlier today. Its "hello" signal came through to the European Space Agency's control room just before 7:20 p.m. local time (18:20 Universal Time) and kicked off a round of cheering. Rosetta’s alarm pulled the spacecraft out of hibernation to begin study of Comet 67P/Churyumov-Gerasimenko. If all continues to go according to plan, scientists will start the most comprehensive comet study to date, the highlight of which will be history’s first attempt to land a spacecraft on a comet’s nucleus. 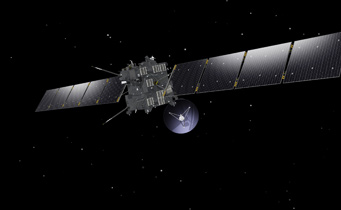 Launched in 2004, the spacecraft was conceived to understand comet activity and composition, as well as what comets can tell us about the formation of the solar system. These frozen time-capsules preserve ice, dust, and rock that have hardly changed since the formation of the solar system, giving scientists a peek into what existed before the planets had formed. A recent study also suggests comets could harbor the ingredients for life — organic materials and even amino acids — in their ices, and might have delivered those building blocks to Earth through impacts.

Once awake, Rosetta will observe the comet from afar for a year and travel with it into the inner solar system. Rosetta will document and observe changes as Comet C-G as it encounters the harsh solar wind and a brighter, warmer environment on its journey towards the closest approach to the Sun. This will be the first time a spacecraft has observed the full transition of a comet from a quiet ice-ball into the feathered beauty of an active nucleus. Cometary scientists are eager to watch how the coma arises from the cold nucleus, developing layers of activity as it flies closer to the Sun. 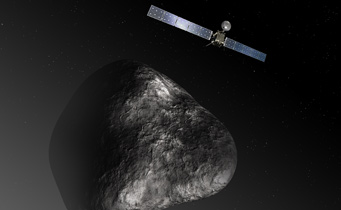 Artist's impression of Rosetta comet 67P/Churyumov-Gerasimenko (not to scale).

A busy schedule awaits Rosetta before its comet becomes fully active. In May 2014, the spacecraft will enter orbit around Comet 67P. In August, it will map the nucleus in search of a suitable landing location for the robot it’s carrying, Philae (FEE-lay). And in November, Philae will be released onto the comet’s surface, using two harpoons to anchor itself, combatting the comet’s incredibly low gravity. Perihelion is expected in August 2015, when the comet comes within 1.25 astronomical units of the Sun.

If you’d like to see the full extent of the journey, this animation details each big event in Rosetta’s mission.

Once safely landed on the comet, Philae will use its 10 instruments to measure the comet’s composition, interior structure, magnetism (if any), and volatile content. (Full instrument specs are available here.) Meanwhile, Rosetta will scrutinize the nucleus, coma, and tail with its own 10-instrument suite. For example, the Optical, Spectroscopic, and Infrared Remote Imaging System (OSIRIS) should record high-resolution pictures of the comet’s landscape and other features. These data, along with Rosetta’s information from cometary orbit, will paint a complete portrait of the nucleus, shed light on the comet’s origin and its interaction with the solar wind. 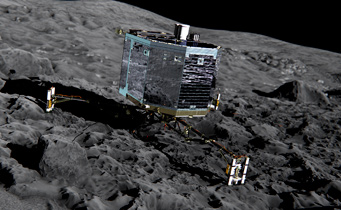 Artist's impression of Philae on the surface of comet 67P/Churyumov-Gerasimenko.


ESA / ATG Medialab
Will Philae be able to set down safely and secure itself? The mission team worries that Rosetta might not be able to find a suitable landing place, or that Philae will not land intact and functional. Since this is the first time a soft-landing has ever been attempted on a comet’s nucleus, scientists are creating back-up plans for the lander. The rest of us will have to wait and see what happens in November.

Rosetta has already taken plenty of data — during its colorful flybys past Earth and Mars, which exploited the planets’ gravity to “kick” it out to its final destination.

The spacecraft also passed two asteroids at close range: 2867 Steins, which resembles the princess-cut diamond ring of a wealthy starlet, and 21 Lutetia, whose 130 by 75 km (80 by 50 miles) size makes it worthy of the title “minor planet.” The incredible flyby video is here.

For the story until now, told in the fairy-tale style of a children’s book, watch this cartoon about Rosetta and Philae’s 10-year journey. Warning: it’s a cliffhanger.

I was curious why the lander is called "Philae," so I looked it up. Here's what wikipedia has to say (note the connections to Osiris and to the Rosetta stone): "Philae, being accounted one of the burying-places of Osiris, was held in high reverence both by the Egyptians to the north and the Nubians (often referred to as Ethiopians in Greek) to the south. It was deemed profane for any but priests to dwell there and was accordingly sequestered and denominated "the Unapproachable" (Ancient Greek: ̓́αβατος). It was reported too that neither birds flew over it nor fish approached its shores. These indeed were the traditions of a remote period; since in the time of the Ptolemies of Egypt, Philae was so much resorted to, partly by pilgrims to the tomb of Osiris, partly by persons on secular errands, that the priests petitioned Ptolemy Physcon (170-117 BC) to prohibit public functionaries at least from coming thither and living at their expense. In the 19th century AD, William John Bankes took the Philae obelisk on which this petition was engraved to England. When its Egyptian hieroglyphs were compared with those of the Rosetta stone, it threw great light upon the Egyptian consonantal alphabet."