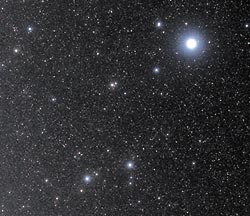 Hidden in plain sight. Familiar Vega, one of the brightest stars in the sky, has just yielded up a surprising secret about its true nature.

Astronomers have finally figured out the long-standing mystery of why Vega, the fifth-brightest star in the night sky, is brighter than it ought to be. Using a linked array of telescopes to gain extremely high resolution, they measured brightnesses and temperatures across different parts of Vega's face. They got readings that no one expected, but that turn out to put Vega's problems neatly in order.

Meanwhile, another group using the same facility has discovered that red dwarfs, the most common stars in the universe, are significantly larger than was long thought.

Both groups used the CHARA (Center for High Angular Resolution Astronomy) Array: a Y-shaped layout of six 1-meter telescopes on Mount Wilson overlooking Los Angeles, California. Operated by Georgia State University, the CHARA Array is an interferometer — a grid of telescopes so intimately linked that individual light waves from each one can be combined to achieve extremely high resolution overall. The two CHARA telescopes that are farthest apart are separated by 330 meters (1,083 feet), which gives the array nearly the resolution of a hypothetical 330-meter telescope. CHARA can resolve details as small as 200 microarcseconds — about the angular size of a nickel seen from 1,600 kilometers (1,000 miles) away.

A team led by Jason Aufdenberg (National Optical Astronomy Observatory, Tucson) used the CHARA Array to measure the angular size of Vega, located 25 light-years away in the constellation Lyra. For decades astronomers have realized that Vega is about 50 percent more luminous than it should be, according to stellar theory, given its measured temperature. With CHARA's high resolution, Aufdenberg and his colleagues confirmed long-standing suspicions that Vega is not a simple sphere. It is oblong, due to fast rotation, but we happen to view the star nearly pole-on, so its disk on the sky appears round and the fast rotation has gone unrecognized. This situation is the key that unlocked the mystery.

The CHARA measurements revealed that Vega's disk is much dimmer around its edges than in the middle. This is the natural consequence of a pole-on star spinning so fast that it's nearly breaking up. In fact, the astronomers calculate, Vega's equatorial diameter is about 2.8 times that of the Sun, but its polar diameter is only about 2.3 times that of the Sun — meaning the star is 20 percent larger across its equator than along its axis. This oblong shape results from Vega spinning once every 12.5 hours, or 92 percent of the star's calculated breakup speed.

"Rapid rotation means a star's poles will be hotter," explains Aufdenberg. In fact, the observations show that Vega's poles are about 9,900°C, a whopping 2,300°C hotter than the equator. A civilization whose planet is aligned with Vega's equator would see a much cooler and less luminous star overall. The dimmer equator is what gives Vega so much apparent "limb darkening" as seen from Earth's perspective, and the bright pole being aimed at us is what makes the star appear too bright.

"Vega looks like a star with 60 solar luminosities, but it should be about 40," says Aufdenberg. When the team corrected for this, they found that Vega emits 37 times as much light as the Sun overall — a close match with theoretical predictions. 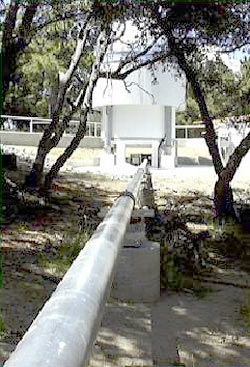 One of the six 1-meter telescopes making up the CHARA Array. Light from each scope is sent through a vacuum pipe (foreground) to a central facility. Here individual light waves, sampled by telescopes up to 330 meters apart, are delicately reassembled — enabling the array to measure angular sizes as small as 0.2 milliarcsecond for bright objects.

CHARA's ability to measure stellar diameters may have closed the books on the Vega mystery, but it has thrown stellar models for a loop regarding red dwarfs: small, cool, dim stars that make up about three-fourths of all the stars in our galaxy.

A team led by David Berger (University of Michigan) precisely measured the diameters of six red dwarfs with CHARA. All six turned out to be 15 to 20 percent larger than theoretical models predict, given the stars' masses. These observations confirm earlier red-dwarf size measurements made by other interferometers, as well as indirect determinations made with conventional telescopes of red dwarfs in eclipsing binary systems.

Berger thinks the models fail to account properly for the presence of molecules such as water vapor in a red dwarf's upper atmosphere. These molecules would tend to dim a star's surface slightly, therefore requiring the star to be bigger to give off the total amount of light observed.

Berger and Aufdenberg presented their results at the American Astronomical Society conference happening this week in Washington, DC. Both astronomers point out that the first interferometric measurements of stellar diameters were made on Mount Wilson by American physicist Albert A. Michelson in the early 1920s. In a landmark achievement, Michelson used interferometry to measure the relatively large angular size of Betelgeuse (a red supergiant) in 1920. Says Berger, "This is a very historic place for interferometry."