Of Pixel Size and Focal Reducers 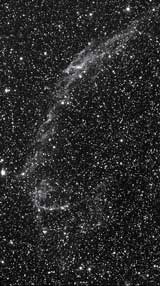 Digital cameras are not well known for their wide-field imaging abilities. Nevertheless, when a chip’s pixel size is properly matched to a telescope’s focal length, some of today’s CCDs can cover a considerable amount of sky. David Hanon of Ringgold, Georgia, captured this 11/4°-tall view of the eastern Veil Nebula with an SBIG ST-8 camera equipped with a KAF-1600 CCD. His 20-minute exposure was with a 7-inch Astro-Physics refractor operating at f/6 with a focal reducer.

The scene played with the predictability of a well-rehearsed script. On a half dozen occasions visitors stopped by while I was testing two high-end digital cameras during the late 1990s. Each knew about the Kodak KAF-1600 and KAF-1000 CCDs in these cameras, but none had seen them firsthand. Handing each person the first camera, I would click the computer’s mouse to snap open the shutter and reveal the Chiclet-size KAF-1600. With almost 20 times the imaging area of chips in early cameras marketed to amateur astronomers, this CCD impressed everyone.

Nevertheless, when the shutter clicked open on the KAF-1000 camera, jaws dropped. "Now that’s a CCD!" exclaimed one guest. Measuring 1 inch square, this chip offers only slightly less imaging area than a frame of 35-millimeter film. While everyone was predictably fascinated by this expensive bit of silicon real estate, blank stares followed my comment that, at a given resolution, I could capture more sky with the KAF-1600 despite its substantially smaller size.

How can this be? Even a quick glance reveals the KAF-1000 to be considerably larger — 4.65 times, to be precise — than the KAF-1600. The key to this paradox, however, was my qualifying statement that at a given resolution the KAF-1600 covers more sky.

Most of us photographers never think much about resolution. Today’s emulsions have relatively fine grain, and we use the same film with telescopes big and small. As such, the larger the piece of film, the more sky will be captured up to the point where optical or mechanical considerations limit the field of view.

CCDs, however, are a different story. Pixels — the individual, light-sensitive picture elements that make up the checkerboard array of a chip’s imaging area — come in many sizes. The detectors found in today’s popular cameras have square or slightly rectangular pixels ranging from about 7 to almost 30 microns (thousandths of a millimeter) across. The best results occur when a pixel’s size is matched to a telescope’s resolution under a given set of observing conditions. For example, conventional wisdom suggests that the astronomical seeing conditions experienced by a typical backyard observer will produce excellent deep-sky images with pixels that cover about 2 arcseconds (2") of sky. 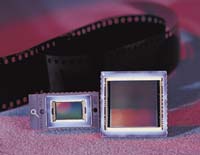 Even a glance reveals the dramatic difference in physical size between the Kodak KAF-1600 (left) and KAF-1000 chips. But, as explained in the text, at a given resolution the KAF-1600’s 1.6 million pixels can cover 60 percent more sky despite having only about one-fifth the area of the KAF-1000.

With this criterion established, the paradox is quickly resolved. If you adopt a given pixel scale such as 2" for deep-sky imaging, then you need only remember that the more pixels a chip has the more sky it will cover regardless of the chip’s physical size.

There is a catch, however. Obtaining the same 2"-per-pixel scale for these detectors necessitates very different effective focal lengths. Indeed, the KAF-1000’s larger pixels require an effective focal length of 2,475 mm (about 97 inches), while the smaller KAF-1600 pixels need only 928 mm (about 37 inches). The nomogram on the next page makes simple work of determining the relationships between pixel size, focal length, and a pixel’s image scale.

Image scale, not pixel size, controls the resolution of digital images. To illustrate this point, the author made these pairs of 3-minute exposures of the edge-on spiral galaxy NGC 981 in Andromeda with a Meade 16-inch LX200 Schmidt-Cassegrain telescope and SBIG ST-7 camera equipped with a KAF-0400 CCD. By changing focal reducers and binning pixels, roughly similar pixel scales were obtained at focal lengths of 1,303 and 2,365 millimeters (f/3.21 and f/5.85, respectively). Note that the resolution at a given scale is independent of pixel size. The shorter focal length covered about four times more sky than the longer one. Insets: A 5x enlargement of the double star to the lower right (southwest) of the galaxy’s nucleus. The magnitude-161/2 components are separated by 5.8'.

You might think that these parameters would be fixed for a given telescope and CCD camera. However, it is usually possible to vary both the focal length and pixel size within some limits.

Most cameras sold today offer what are called binning modes -- the ability to electronically combine the signal collected by several adjacent pixels such that it appears to come from a single, larger pixel. There are several advantages of binning, including faster image readout, smaller file sizes, and greater CCD sensitivity for a given optical system. This technique is often used with long-focal-length systems, which deliver generous images scales. Unfortunately, binning also reduces a CCD’s effective number of pixels.

Roger W. Sinnott developed this nomogram to show the relationship between image scale, effective focal length, and pixel size. A straight line connecting any two values passes through the third. For example, in order to have a 9- micron pixel cover 11/2' of sky requires a focal length of about 50 inches. While experience ultimately dictates the best image scale for given conditions, conventional wisdom suggests that scales of 11/2' to 2' are good for general deep-sky imaging, while lunar and planetary work can benefit from scales as small as 1/2' with apertures large enough to allow short exposures that "freeze" the astronomical seeing.

If we want the greatest sky coverage from a given CCD, we should operate the chip in its full-resolution (unbinned) mode and select a focal length to produce the desired image scale. As mentioned earlier, for 9-micron pixels, a scale of 2" requires an effective focal length of about 37 inches. Traditionally such short focal lengths have been the domain of small apertures. While CCDs can deliver remarkably big performance with small telescopes, it’s still desirable to use large apertures for deep-sky imaging. Besides, you probably want to work with your existing telescope. So from a practical standpoint the question becomes, what can be done to adjust its focal length? Fortunately, you can do a lot.

Focal reducers come in all shapes and sizes. The author feels they are one of the most important accessories for digital imaging since they are ideal for adjusting a telescope’s effective focal length to a CCD’s pixel size.

During the past 20 years numerous focal reducers have appeared on the market. Most observers think of these in terms of decreasing a telescope’s f/number to make it "faster" photographically. But, as the name implies, these accessories work by reducing a telescope’s effective focal length. They are excellent for helping match image scale and pixel size. This is especially useful for Schmidt-Cassegrain telescopes.

In the past the challenge was to design a system with high-quality images across a large field. But since CCDs are relatively small this tolerance can be relaxed, and many focal reducers suitable for digital imaging can be made from simple achromatic lenses such as those scavenged from a old pair of binoculars. (An excellent source of information about the design and function of focal reducers is an article by the late Alan Gee on page 367 of this magazine’s April 1984 issue.)

Today, however, designing a custom focal reducer is necessary only in unusual situations. Commercial units, particularly those for Schmidt-Cassegrain telescopes, offer many options -- especially when the resulting focal length is tweaked by adjusting the spacing between the reducer and CCD.

The compression factor of popular focal reducers can be varied somewhat by adjusting the spacing between the reducer’s back mounting surface and the CCD. The author derived this graph using Celestron and Meade f/6.3 reducers, which are designed for a spacing of 105 mm.

Popular f/6.3 reducers sold by Celestron and Meade for their f/10 Schmidt-Cassegrains are designed to be used with a 105-mm separation between the back surface of the reducer and the detector (be it film, CCD, or whatever). As the accompanying graph indicates, altering this spacing changes the compression factor — great for fine-tuning a CCD system. Increasing the separation increases the amount of compression and thus reduces the effective focal length. Ideally we could increase the separation enough to accommodate small pixels. In practice, however, either image quality or, more likely, mechanical restrictions imposed by the telescope’s focusing system will limit the amount of compression that can be obtained.

There is one notable exception. Optec’s MAXfield unit is specifically designed to compress the field of an f/10 Schmidt-Cassegrain to a remarkable f/3.3 for CCD work. The spacing between the reducer and chip is critical, however, and changing it by even a millimeter degrades images. Also, the reducer has a maximum usable field about 11 mm across, too small for large chips.