The Vitals (for Spica A) 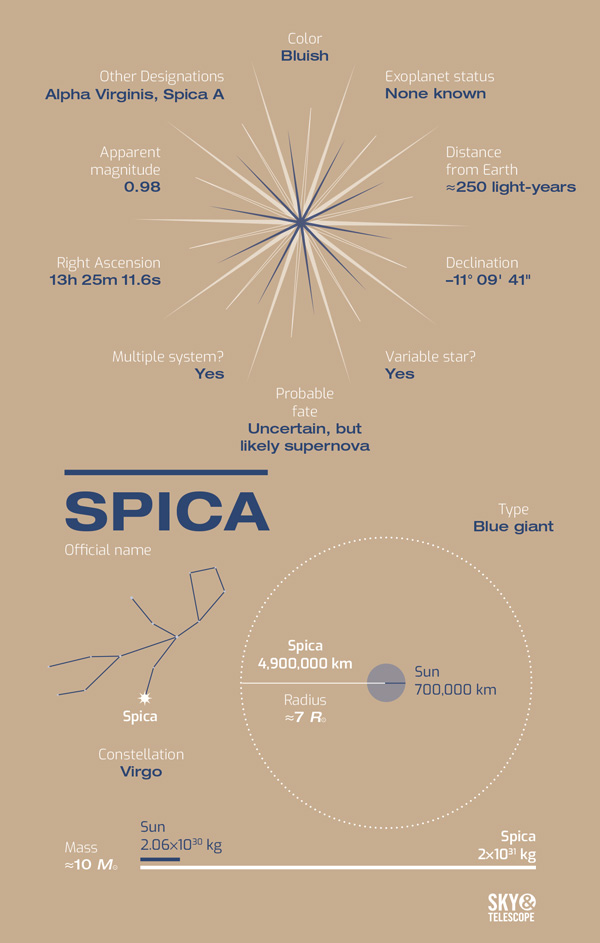 Spica is the brightest star in the constellation Virgo, and one of the top 20 overall brightest stars visible to us, so it’s quite well known. Yet Spica isn’t a singleton: it’s actually two stars.

Binary stars, of course, are no strangers to amateur astronomers. They’re quite common, and many are easily visible through a telescope or binoculars (or even without optical aid, such as Mizar and Alcor). So it shouldn’t come as a surprise to hear that Spica is actually a pair of stars — except that you can’t see the second star, even with a big telescope. The system is an example of a spectroscopic binary. As the stars orbit each other, the light they emit shifts slightly blueward or redward depending on whether they’re moving toward or away from us, respectively. These so-called Doppler shifts are what astronomers picked up in 1890, suggesting that Spica A had a companion.

Visually, though, the pair merges into a single point. Why is this? Distance is partially responsible, as Spica is more than 260 light-years from us. But the other reason is that the two stars are extremely close together, separated by a tight 11 million miles, or 0.1 astronomical unit. That’s only a third of the average distance between Mercury and the Sun. The stars revolve rapidly around each other with an orbital period of only four days.

The stars’ proximity to each other causes some intense tidal forces. Just as the Moon’s gravity slightly reshapes Earth, causing it (mostly its oceans) to bulge at the equator, Spica A and B exert tidal forces on each other but in a far more spectacular fashion. Even though the two stars are separated by a distance greater than that between Earth and the Moon, they are also quite massive so they exhibit a strong gravitational pull on each other. These forces are so intense that the two stars distort each other’s shape.

Because of the stars’ oval shapes, the system brightens and fades as they orbit each other. These variations aren’t quite regular, though, because Spica A also pulsates, driving additional, rapid changes in brightness. From Earth's point of view, the pair pass over each other just slightly in a grazing eclipse, which adds another source of variability.

Spica A has a mass of about 10 times the Sun’s, while its smaller companion Spica B about six times more massive than the Sun. The majority of the system’s luminosity, however, comes from the main star.

Virgo, Spica’s constellation, has many different myths attached to it from various cultures — Greek, Babylonian, Egyptian — but they generally center around two common points: 1) Virgo is a woman, and 2) she has something to do with spring, crops, or In some illustrated star charts, Virgo is drawn with a bundle of wheat or some other grain in her hand. This grain marks the location of Spica, which is indeed Latin for “ear of grain.” This association with harvests may arise because the Sun moves into Virgo in the fall. The association with spring is interesting as well, as Virgo first becomes visible in the evenings right around the spring equinox.

In the 100s B.C., Spica helped the Greek astronomer Hipparchus discover the precession of Earth’s poles when Hipparchus visited an ancient Egyptian temple in Thebes. The temple had been constructed about 2,000 years prior and was thought to be oriented according to Spica's heliacal rising — the time of year when the star becomes briefly visible above the eastern horizon just before sunrise. Noting that Spica had “drifted” during the passing millennia led Hipparchus to theorize the slow drift of precession.

How to See Spica

Viewed from North America, Spica is in a fine position for observation throughout the spring — when it begins to rise at about sunset — and through the first half of summer, when it’s visible fairly high in the southern sky. It’s close to ecliptic, so expect to view occasional conjunctions with the Moon and/or planets, as well as the rare occultation.

Finding Spica is easy, once you know the mnemonic: Following the Big Dipper’s handle, arc to Arcturus, then speed on to Spica. The distance between the Big Dipper and Arcturus is roughly the same as between Arcturus and Spica. The route is rather a long one to trace, but a gentle curve will get you there.

Why not go out and view Spica this spring? While you’re doing so, take a moment, as many have done before you, and appreciate the way this “ear of grain” heralds the season of growth and planting.