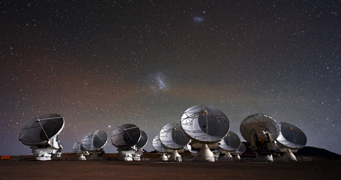 In the November 2013 issue of S&T, I write about a revolutionary new telescope being built in the Chilean Atacama Desert. The Atacama Large Millimiter/submillimeter Array (ALMA) explores a little-known region of the electromagnetic spectrum, waves that are longer than the farthest infrared but shorter than radio waves. Submillimeter/millimeter waves come from frigid gas just tens of degrees above absolute zero; ALMA promises to see better than any other telescope in this wavelength range, unveiling secrets of star, planet, and galaxy formation.

ALMA's powers of observation come from a technique called interferometry. A specialized supercomputer combines signals from each pair of antennas to mathematically craft an image up to 10 times sharper than images from the Hubble Space Telescope.

Already ALMA has produced some amazing results, and we've covered many of them at S&T:

When an astronomer observes with ALMA, they receive their observations in a "data cube," a two-dimensional picture where each pixel contains a spectrum. An example of the data cube can be seen in the below video of the giant, aging star R Sculptoris (though "data sphere" would be a more apt description in this case). The data is visualized in two dimensions by slicing through the sphere, where each layer represents a different frequency. Each frequency in turn translates to a different speed of the gas ejected from the star. R Sculptoris blows a wind that turns spiral-shaped as the dying star orbits an unseen companion; the spiral is most easily seen halfway through the video. (All the gas in this image comes from the stellar wind; the binary star system is hidden in the center.)