For the first time, astronomers have imaged a key stage in planet formation, witnessing the gas streams that signal two gas giant planets sweeping up material around a star.

A few million years after starbirth, leftover debris encircles the newborn fireball, feeding the growing star and any planets it hosts. But growing planets can carve large gaps in the disk, wreaking havoc with the food supply. 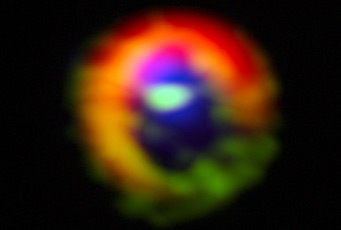 Previous telescopes had observed a large horseshoe-shaped ring around the young star HD 142527 with a prominent gap. But when ALMA turned its eye on the star's debris disk, it saw far more — streams of dust and gas are crossing the gap from the outer disk (red and green) to the inner one (white). The streams are at the three o'clock and ten o'clock positions. This image also shows residual gas (blue) in the large cavity between the two disks.

One such gap cuts the disk around young star HD 142527, stretching from 10 astronomical units (the size of Saturn’s orbit) to 140 a.u. (three times the size of Pluto’s orbit). The large gap poses a problem: the star ought to have gobbled up all of the inner disk by now, yet the disk persists. In theory, planets in the gap could initiate gas streams, which would replenish the inner disk and feed the central star. But theory remained unconfirmed by observations.

Now Simon Casassus (Universidad de Chile, Chile) and his colleagues have imaged the star system using 19 antennas that are part of the Atacama Large Millimeter/submillimeter Array (ALMA), which sits 16,400 feet high in the Chilean Atacama Desert. Even using only a fraction of the 66 dishes that will eventually make up the still-under-construction radio array, Casassus and his team achieved sharp images of HD 142527’s gaseous surroundings.

ALMA observed an outer, horseshoe-shaped gas ring around the star. The gravitational effect of planets is probably responsible for the distinctive shape. The outer ring had been imaged before by the Submillimeter Array, but in much coarser resolution. While the SMA hadn’t been able to resolve much inside the horseshoe disk, eagle-eyed ALMA discerned two gas “bridges” crossing the gap from the outer to the inner disk. ALMA even measured the gas speed as it spools from the outer disk and slams into the inner disk, feeding the central star in the process.

“Astronomers have been predicting that these streams must exist, but this is the first time we’ve been able to see them directly,” Casassus said in a press release. 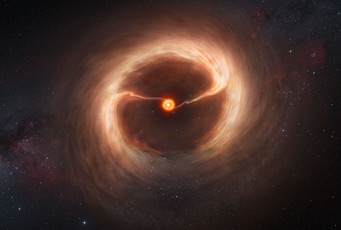 An artistâ€™s impression shows the disc of gas and cosmic dust around the young star HD 142527. Two planets initiate the gas streams as they interact with the stellar disk; the gas streams feed the central star, but they are also a key part of the planets' formation.

A planet, by the force of its gravity, pulls each stream from the outer disk, but most of the gas doesn’t end up on the planet. Instead, much of the gas overshoots, passing the planet and slamming into the inner disk.

Casassus’s team also discovered diffuse gas in the disk gap — more evidence that the gap was cleared by planets and not by something more massive, like a companion star. Though the team attempted to detect the planets themselves, they had no luck — the gas giants are likely enshrouded in dust and gas that would make seeing them directly impossible for current instruments.

However, imaging the planets was not crucial to the study’s findings. Just by observing the gas streams and the residual gas in the cavity, the astronomers were able to measure roughly how much gas was flowing from the outer disk into the inner one. Since the star is accreting gas at a steady rate, the evidence is heavily in favor of planet-led gas streams. In future ALMA observations, the authors hope to measure just how much gas is streaming, to get a better idea of the mass of the planets themselves.

This is an interesting and promising report! It's fun to imagine solar systems developing, and very satisfying to have some actual empirical findings and images to constrain our imaginations. By the way, whenever I read about a star, galaxy, or whatever, I like to know where it is in the sky and whether I might see it through my little telescope. A quick web search reveals that HD 142527 is in Lupus, RA 15h 56m 41.89s, Dec −42°19′23.5", magnitude 8.3. So at 37 degrees north latitude I'm too far north to see this star, but folks in the tropics and the southern hemisphere can see it through binoculars!

I enjoyed this report. Here is something on the topic from sciencedaily.com. 'How Young Star and Planets Grow Simultaneously', http://www.sciencedaily.com/releases/2013/01/130102140355.htm

My observation - this report indicates the inner disk is depleted in <=1 year so something is going on here. If gas giants how these formed and avoided falling into their host star remains unanswered in the reports I have collected on the subject. Also if a gas giant(s) there is an upper mass limit, if too large the whole disk system can be disrupted. I plan to wait and see if exoplanets can be clearly identified.

I agree, this was an interesting story, but the unexplained reason for the gap in the “horseshoe shaped” outer gas ring left me puzzled. Then I realized that this proto system must be quite eccentric. Just as a circle viewed obliquely looks like an ellipse, a true ellipse viewed from an angle can appear circular. The two planets orbits must be such that they spend the preponderance of their time out nearest the gap area of the outer ring, so that’s were this ring has been eroded the most. In the ALMA image the bright central area is offset from the center, providing clear evidence of eccentricity, but this fact is somewhat hidden by the artist’s impression which depicts HD 142527 near the center of a very circular ring. Are eccentric planetary orbits the correct reason for the ring gap, and if so, what is the estimated eccentricity of the system?

Beautiful image! Thanks.. I needed that! 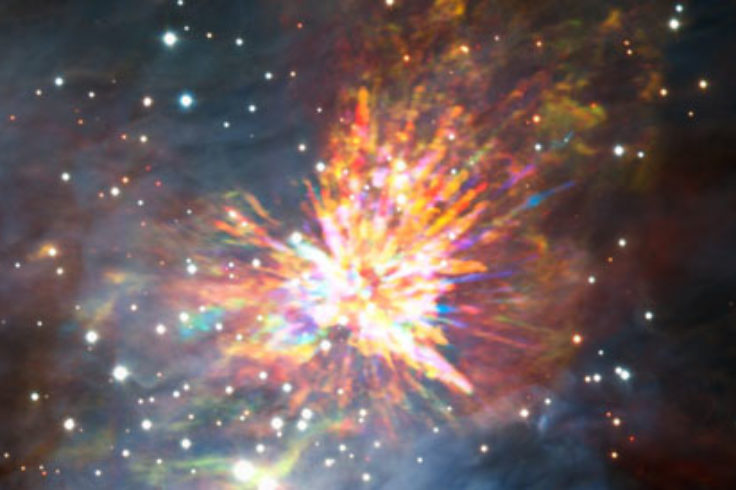 Too Many Massive Stars in Universe's Youngest Galaxies