The Event Horizon Telescope team has unmasked the heart of the jet-shooting galaxy M87.

Astronomers just knocked on a black hole’s door. An international team reports in this week’s Science that it has peered into the very heart of M87, an elliptical galaxy whose supermassive black hole spews forth a 5,000-light-year-long jet of ionized particles flung out by whirling lines of magnetic field. 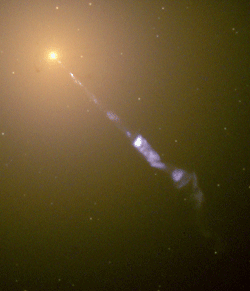 The well-known elliptical galaxy M87 has a jet pointing somewhat toward us, although not as straight-on as a blazar. The jet extends several thousand light-years.

The astronomers used four radio telescopes in three locations — Hawaii, Arizona, and California — to make the observations, which are part of the still-developing Event Horizon Telescope project. When completed, the EHT’s planet-wide network of antennas will span from the South Pole to Hawaii and southern Europe, working together as a single Earth-size telescope to cut through the veil enshrouding nearby supermassive black holes and reveal how physics works where extreme gravity is the only game in town.

Last year, a Japanese team led by Kazuhiro Hada (National Astronomical Observatory of Japan) used the Very Long Baseline Array to observe as close to the base of M87’s jet as the astronomers could. They found that, as they observed at higher frequencies, the jet’s apparent origin walked backwards toward the black hole, as though it were about to converge on a fixed point.

Sheperd Doeleman (MIT Haystack Observatory) and his colleagues have now used the nascent EHT to observe M87 at 230 GHz, a frequency five times higher than the highest frequency used by the Japanese team. At 230 GHz astronomers can cut right through the dense material bunched up in the jet’s core, down to the point where the source stops inching backwards. When they measured the size of the jet, the astronomers found its diameter was about 5.5 event-horizon radii (or 2.25 black hole widths).

Hada agrees. “The EHT team has actually made it” to where the jet launches, he says. “This is a very exciting result. I would like to say congratulations on the excellent work of the EHT team.”

A black hole's spin determines how close the swirling accretion disk can come to the event horizon. If the black hole and disk spin the same direction (top), the disk will hug more closely than if the black hole doesn't spin (center) or if it spins the opposite direction (bottom). Click for a larger view.

Here’s where things turn strange. The black hole is a gravitational pit in spacetime, and it bends nearby light like a lens. The innermost edge of the gas accretion disk feeding M87’s black hole — a leviathan weighing 6 billion Suns — should form a ring about 6 event-horizon radii across, as long as the beast isn’t spinning. But general relativity can play tricks on the eyes. Because the black hole bends light emitted from the surrounding disk of hot gas, this innermost edge would look like its width was 7.3 event-horizon radii. Even with the requisite fudge room in the numbers, 5.5 is not 7.3.

So the EHT team decided to make two assumptions. One, the emission the astronomers observe comes from where the jet’s spaghetti-noodle-like magnetic field lines pick up most of their material. Two, this loading dock is anchored in the accretion disk’s innermost edge.

If both these assumptions are true, then M87’s black hole has to be spinning in the same direction as the disk around it, and at a speed at least 20% the speed of light, the team concludes.

Not everyone’s convinced by this conclusion. “The observation is very nice, but the interpretation needs confirmation,” says Alan Marscher (Boston University).

Jet theorist Alexander Tchekhovskoy (Princeton) agrees that the conclusions are only as good as the assumptions behind them. He says that the emission the EHT detects might not be from the disk’s inner edge but from the second jet shooting from the black hole’s other pole, a jet astronomers have only seen hints of because it points away from us. If so, the spin deduction goes out the window.

Doeleman agrees with these concerns. “Of course these observations are open to interpretation,” he says. But he asserts that the conclusion is not his team’s most important point. The astronomers only used three sites to make their EHT network, but already the observations are nearly at the point where they can distinguish what’s happening at the jet’s base. With more sites — most notably the Atacama Large Millimeter/submillimeter Array, which will integrate with the EHT in 2015 — the team will be able to determine what’s making the emission they detect.

“We’re getting some real data,” Doeleman says — and that’s a milestone in a field that’s been basically theoretical for so long. Now’s the time that astronomers can actually get serious about solving jets, he says, because they’re obtaining specific observations that theorists will have to explain. “This is a nut that we can crack.”

It is hard for charged particles to cross magnetic field lines, especially the faster they move, in this case, 20% that of light. Magnetic field lines bunch up to nearly infinite density close to the event horizon of a black hole, running parallel to the rotation axis. So as ions near the 5.5 event horizon radii, an almost infinite force (gravity) meets an almost infinite resistance (magnetic field lines). The conflict can be resolved by imagining two particle interacting. One somehow steals kinetic energy from the other, making a hard 90 degree turn in the process. It is now moving parallel to the magnetic field lines, so meets zero resistance in that direction, and shoots straight out the rotation axis. The other particle loses kinetic energy (velocity), and so meets less resistance in crossing the field lines, and it finally falls into the maw. While not a complete explanation, the formation of jets almost certainly involves this dynamic: gravity trying to pull material in along the plane of the equator; magnetism trying to force the plasma to move along the rotation axis.

Nice article Camille. Peter Wilson, your apply titled Jets 101 comment is the clearest explanation for relativistic jets shooting out from black holes that I’ve ever read. Who’d you plagiarize? No, I’m sorry, just kidding. Thanks for sharing.