My high-school students are probably tiring of my telling them how much information about a star can be divined simply from measuring its light, especially when the observations involve multiple spectral regions. Well, they're going to hear it again, when I tell them the amazing story of HM Cancri. 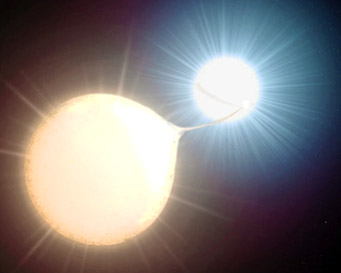 The closely paired white-dwarf stars in HM Cancri circle each other in just 5.4 minutes. A stream of matter from the star at left is falling onto the hotter, denser, more massive star at right.

With a visual magnitude of 21, this star wasn't even known to astronomers until 1999, when the orbiting Rosat observatory discovered an X-ray source that brightens and dims every 5.4 minutes. To observers, such isolated X-ray emitters usually scream "interacting binary" — including a degenerate has-been of a star, a white dwarf or neutron star, that's pulling matter off a hapless companion. The exiting stream slams onto the dwarf or neutron star (or onto a disk around it) violently enough to generate X rays.

But could HM Cancri's twosome actually be whirling around each other in less time than I usually need to take out the trash? No other known binary system has a period this short (the closest contender, V407 Vulpeculae, clocks in at 9½ minutes). In the past decade theorists have offered two alternative interpretations, which require a binary system with a dense object either rotating or orbiting with a 5.4-minute period.

New observations seem to clinch the idea that HM Cancri's two stars really are locked in a 5.4-minute whirlwind dance. An international team led by Gijs Roelofs (Harvard-Smithsonian Center for Astrophysics) captured the system's spectrum last year using the Keck I telescope on Mauna Kea. The researchers had been doggedly persistent — they'd wanted to make these observations in 2005, 2006, and 2007, but bad weather scuttled their plans each time.

The Keck spectra reveal blue-light emission from hot neutral helium (presumed to come from the donor star) and from ionized helium (from the hotter, denser star accreting the matter). What makes the case ironclad is that these emissions are Doppler-shifted in opposite directions. When one source is moving away from us, the other is moving toward us, and vice versa, clinching the case for a fast binary. A single neutron star, no matter how fast it's spinning, can't match the Keck observations. The artist's concept at upper right shown the presumed situation.

Roelofs and his colleagues calculate that HM Cancri's stars are only about 3 Earth diameters apart — so close that the donor star (also a white dwarf, with about a quarter of the Sun's mass) must be swollen and distended by the pull of its heavier companion (with about half a Sun's mass). A double peak in the ionized-helium emission also implies that a fast-spinning ring of matter encircles the accreting star, either as a belt on its surface or as a disk above it.

One remaining loose end is finding an explanation for why the paired stars are gradually twirling faster and faster. Since the total mass is conserved, the mass transfer can't explain it. "The binary HM Cancri is a real challenge for our understanding of stellar and binary evolution," notes team member Gijs Nelemans (Radboud University, The Netherlands) in a press release. The team also hopes to pin down the system's distance, which is only roughly estimated to be 16,000 light-years.

No matter how these stars became so closely entwined (they're much too close to have been born that way), HM Cancri's tight whirlabout must make it one of the strongest sources of gravitational waves in the galaxy. As high-energy astrophysicist Tod Strohmayer (NASA-Goddard Space Flight Center) points out, "This object is likely radiating more energy in gravitational waves than in electromagnetic energy." That in itself could account for the pair's orbital-energy loss and period speedup. Not surprisingly, it's high on the list of targets for the European Space Agency's proposed (but as yet unfunded) Laser Interferometer Space Antenna, designed to detect sources of low-frequency gravitational waves using a triad of widely separated spacecraft.

Regarding your first paragraph, one thing that's always interested me about astronomy is the challenge that it's not really an "experimental" science in the sense that (for objects outside the solar system, for the time being) we're limited entirely to "observation", and can't do experiments on these distant objects. And even those "observations" are limited to the electromagnetic spectrum- only one of our five human senses.

I love dangerous objects. No, not knives and broken glass. The HM Cancri binary star is probably emitting enough xrays that no human observer could survive at 1 AU, maybe 10 AU from the system. But darnit, don't you wish you could see that thing up close??? See what the donor star's gas stream really looks like. Get close enough to the point of impact with the accretion disk/belt (I'm hoping for a belt!) to really see what the incandescent turbulence looks like. Feel if there's a physical sensation or visual distortion associated with the gravity waves.

I would like to feel the ultimate smoothness of the surface of a neutron star. Watch the nuclear holocaust of a periodic nova. Watch in real time a collapsing red giant, and be right up-close when the heavy elements start to fuse into post-lead atomic weights.

Maybe some day we will gather enough data and have powerful enough computers to model these things adequately to satisfy my wanderlust. (Ok, probably not the tactile smoothness of a neutron star or the feel of gravity waves, but at least the visuals.) In the mean time, we'll have to make due with artistic renderings, and of course our imaginations while we peer through our own telescopes, knowing that the photons striking our retinae are the actual photons released from those distant dangerous objects.

I'm tired of seeing illustrations of close double stars shown as spherical while they shoud be elongated and to an extreme point in the case discussed here. Centrifugal force would have it elongated also on the opposite side of the companion. Roelofs even mentions in the article that: "...must be swollen and distended by the pull of its heavier companion..." Too bad the illustrator didn't read that! JM

It might be that the combined gravitational pull between the pair is gradually pulling them towards ezch other, instead of a balanced mutual orbit. Then, like a tether bsll wrapping around its pole, the circumference of the "twirl" and the corresponding period of the orbital exchange would get smaller! Eventually, this would end with the two becoming as one, so to speak!

This is definitely an amazing object: Two stars which orbit each other at a distance of ~19,000 km from each other, one having a mass of 0.25 solar masses and the other a mass of 0.5 solar masses. This puts the smaller one at only 2 * 10^4 time its Schwarzschild radius from its companion!

I have no doubt that the oribital slowdown is due to the emission of gravitational radiation. These stars are 100 times closer than the components of the Hulse-Taylor binary pulsar system, whose slowdown has been used to confirm general relativity. Yes, the components are lighter, but that should be more than compenstated for by the closeness.

It will be neat to track this slowdown over time. It will be much easier to detect a second-order deviation between the predictions of general relativity and reality in a system like this. The precession of the periastrons of the system (if it can be detected) should be able to show such a deviation earlier and more definitively than the Hulse-Taylor system could (assuming that such a deviation exists).

The paper
"Apparent magnitude scale: incandescent lamps"
available at the sites
http://iopscience.iop.org/article/10.1088/1361-6552/aacae5
is worth, hope, reading.