One of the giants of telescope making has died. He shared his years of professional experience with amateurs around the world. 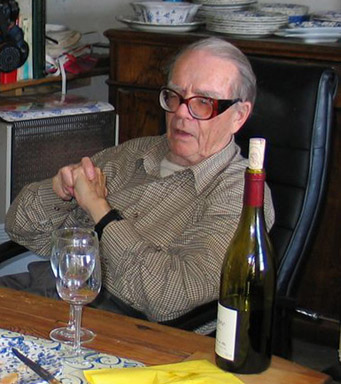 Just three days after his 95th birthday, Jean Texereau — France’s doyen of optical fabrication — passed away on February 6, 2014. In recent years he’d been living in the village of Seillans, in the department of Var.

For more than half a century Texereau made, refigured, or tested optics for large observatory telescopes. He also promoted amateur telescope making through the Société Astronomique de France. But his enduring gift to “glass pushers” around the world was his book La Construction du Télescope d’Amateur, which first appeared in 1951. An English edition, titled How To Make a Telescope, followed six years later.

In the book’s opening chapter, Texereau explained his concept of the “standard telescope” for beginners. This should be an 8-inch reflector, f/6 to f/8, on an altazimuth mount that could be built without a machine shop. He set these limitations because he didn’t want to overwhelm enthusiasts in their first attempt at a telescope. (However, as if to tantalize readers, he admitted that the book’s instructions would suffice for making mirrors up to at least 20 inches in diameter!) 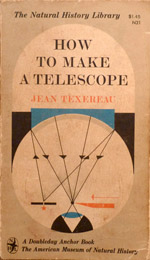 The author's well-worn copy of the first English paperback edition from the 1960s. The book had appeared in hardcover from Interscience Publishers in 1957.

Compared to the American mirror-making books of the 1950s, Texereau’s was more sure-footed in its discussion of the diffraction effects in telescopes. The technique he described for evaluating a mirror’s figure was a significant advance, mathematically, over those used elsewhere.

An expanded second edition of the book reached the French market in 1961. It contained new chapters on making a Cassegrain reflector, an equatorial mounting, and a large optical window to cut down air turbulence within a reflector’s tube. The new material made the book greatly sought after, and it soon went out of print. For a time in the 1980s, copies were selling for $1,000 on the second-hand book market.

Then in 1984, much to the excitement of a new generation of mirror makers, Willmann-Bell brought out the second English edition. It has remained in print ever since. Texereau’s writing has an authoritative ring, and he was never one to hide his opinions. He would go out of his way to answer letters from befuddled telescope makers, remembers Willmann-Bell’s Perry Remaklus. He may be the only professional optician ever to meld his experiences with large optics into a book of practical advice for the amateur. 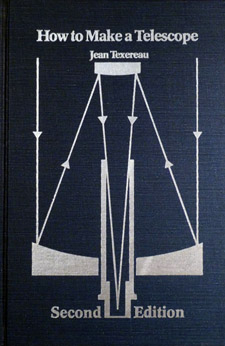 In 1984 Willmann-Bell published this 2nd edition of Texereau, making the book once more available after a lapse of many years.

Texereau’s first telescopes were homemade 10- and 20-inch reflectors. Then one day, in about 1946, the astronomer Gerard de Vaucouleurs introduced him to André Couder of Paris Observatory. Couder, who headed the optics laboratory there, promptly hired Texereau to be his right-hand man. As de Vaucouleurs later recalled it to me, “Couder told Texereau that to become a great optician he had first to sleep in Ritchey’s iron bed.” The bed was still being kept at the lab, even though George Ritchey had left two decades earlier. (Ritchey is best known today for having made the mirrors of the 60- and 100-inch Mount Wilson reflectors, and for inventing the Ritchey-Chrétien reflector design.)

In 1964 Texereau was invited to McDonald Observatory in Texas to see what could be done about the soft star images of the 82-inch reflector. That summer he performed 17 daily figuring steps on the 28-inch secondary mirror, and after each step he put the uncoated mirror back on the telescope for star tests at night. Before Texereau’s arrival, the telescope’s overall wavefront error had exceeded 1 wavelength of light. By the time he left, this error had been reduced to just 1/8 wave.

So did Jean Texereau ever take up André Couder’s suggestion and sleep in that old iron bed? Somehow, I suspect he did!

Can anyone give the correct pronounciation of Jean Texereau's name?

Roger, sorry for this sad news, thanks for posting this memoriam. I followed M. Texereau's book in making my scopes in the late 80s and early 90s. I am especially indebted for his formulae for the Foucault test. Mind you, it gave me fits trying to figure it out! But I finally cracked the nut and my 10" f/5 tested out at 1/13 of a wave, and it gives really nice images.

Terry, for "Texereau" just say "Tex-er-oh"; his first name is more of a problem for English-speaking people. You can imagine saying "Zhawn" but with the final "n" being silent.

I have a quick question for you. "In the book's opening chapter, Texereau explained his concept of the "standard telescope" for beginners. This should be an 8-inch reflector, f/6 to f/8 ..." So is it ok to say, that he's the father of the popular 200/1200 amateur telescope?

Nick, you raise an interesting point. In the U.S. before Texereau there was Ingalls' ATM series (but I'm not sure any specific recommendation came out of that). We also had Allyn J. Thompson's Making Your Own Telescope, which recommends a 6-inch f/8 (150/1200). So you might be right that Texereau was the first to argue for a starting aperture as large as 8 inches (200 mm). --Roger

Bon voyage to M. Texereau, and condolences to his friends and family. I am thrilled to know that he enjoyed a rich and long life, in part evidenced by the half empty bottle of Bourgogne sitting next to him (at age 86)! If you've ever tried to explain, in writing, how to do something, then it is easy to marvel at Texereau's achievement in "How To Make A Telescope". This is especially deserved considering he tackled a subject containing as much subtlety as grinding a mirror, then goes on to present that information for two optical designs and all the other components that together make a functioning instrument. I'm exhausted and my head hurts just thinking about it. I'm pulling my copy off the bookshelf now to reminisce.

Nick, I agree with your idea. Although it was not published until much later than Texereau's "How To Make A Telescope", the "Handbook For Telescope Making" by Neale Howard (first published in 1962) recommends, on page 5, making an eight inch F7 over a six inch mirror as "only a little more difficult to grind and polish" than a six inch mirror and "the extra trouble in making it is more than compensated by the fact that it has almost twice as much area".

Mr. Howard's book was my introduction to the hobby in the 1960's but it was Mr. Texereau's book that I finished that first mirror with. Texereau's treatment of the figuring process removed the frustration I was feeling by providing the knowledge that was needed for me to understand how to successfully complete the mirror. I am indebted to both men for what has become a lifelong hobby.