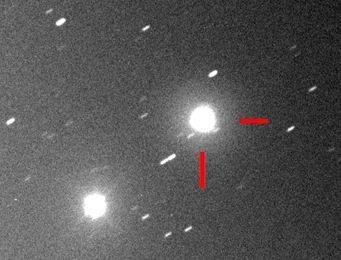 Working remotely from Italy, Ernesto Guido and Giovanni Sostero used a Global-Rent-a-Scope (GRAS) telescope in New Mexico for this confirming image of the new comet.

Two observers in Japan have independently discovered an 8th-magnitude comet, low in the eastern sky just before dawn. Kaoru Ikeya spotted the comet with his 25-cm (10-inch) reflector at 39x, while Shigeki Murakami used a 46-cm (18-inch) reflector at 78x, as reported in IAU Circular 9175 of November 3rd from the Central Bureau for Astronomical Telegrams (CBAT),.

What's astonishing is that both Ikeya and Murakami did it the old-fashioned way: by looking into the eyepiece of a telescope! Visual comet discoveries have become a rarity in this age of powerful professional surveys and digital imaging techniques.

Brian G. Marsden (Minor Planet Center) has calculated a preliminary orbit for the comet, designated C/2010 V1. It is moving in a parabolic orbit and is just past perihelion at 1.7 astronomical units from the Sun (that is, well outside the orbit of Mars). So while this comet won't be getting any brighter in the coming weeks, it should stay within reach of binoculars as it moves slowly southeastward across Virgo.

On November 4th, J. J. Gonzales in Spain and Carl Hergenrother in Arizona called it roughly magnitude 7.5 in their binoculars, while Alan Hale in New Mexico put it at 9.0. To all three observers, it resembled a fuzzy round glow with no tail.

The following ephemeris gives the comet's coordinates (equinox 2000.0) at 0 hours Universal Time on selected dates, aling with its angular elongation from the Sun.

Be sure to check the online version of this AstroAlert on Sky & Telescope's website for updates when the orbit is improved: