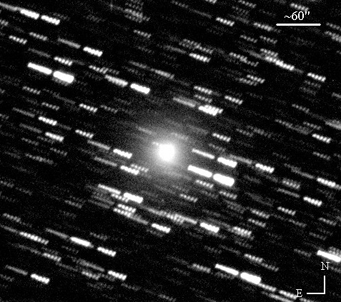 On April 6th, Italian amateurs Ernesto Guido, Giovanni Sostero, and Paul Camilleri captured Comet Yi-SWAN with a 10-inch reflector operated by Global-Rent-A-Scope near Mayhill, New Mexico. This is a stack of 10 exposures of 60 seconds each.

A small 8th-magnitude comet is now making its way slowly across Cassiopeia toward Perseus. The surprise visitor, called Comet Yi-SWAN, should be within reach of small telescopes for most of April and May 2009. However, bright moonlight will make it a challenge to spot until the evening of April 11th.

So far, observers describe the comet as a diffuse glow just a few arcminutes across. No one has yet reported a tail, but that could change in the coming days as the Moon's glare wanes.

Because of its high declination, Comet Yi-SWAN is theoretically visible all night from mid-northern latitudes. But it's best to look for it either right after dusk or just before dawn, the times of night when Cassiopeia is highest in the sky.

On Saturday evening, April 11th, the comet passes just 0.4° south of Schedar (α Cassiopeiae), so they'll be in the same low-power telescopic field. On Thursday night, April 23-24, the comet will glide only 1.2° south of the Double Cluster in Perseus.

Korean amateur Dae-am Yi was the first person to notice the comet. On March 26th, he obtained two images of it with a Canon 5D camera and 90-mm lens. But word was slow to reach the Central Bureau for Astronomical Telegrams (CBAT) at the Smithsonian Astrophysical Observatory in Cambridge, Massachusetts, the world's clearinghouse for comet discoveries.

Independently, Rob Matson reported to CBAT on April 4th that he'd found a possible comet in SWAN images posted on the SOHO website.

Recognizing that the objects were one and the same, CBAT astronomers announced the find on IAU Circulars 9034 and 9035 and gave it the name Comet Yi-SWAN (C/2009 F6). Preliminary calculations by Brian G. Marsden indicate the comet is traveling in a highly inclined parabolic orbit, tipped 85.7° to the plane of the ecliptic. At perihelion on May 8th, the comet will be 1.27 astronomical units (190 million km) from the Sun and half
again farther from Earth.

The ephemeris below, from Marsden's orbital elements, gives the comet's right ascension and declination (equinox 2000.0) at 0 hours Universal Time on selected dates, along with its elongation angle from the Sun, predicted visual magnitude, and the constellation in which it lies.