Step outside as evening twilight fades, and from now through the middle of August you’ll find three planets shining low in the west — one much brighter than the other two. Venus will leap out at you, but you may need to wait for the sky to darken a bit more before fainter Saturn and Mars glimmer into view. 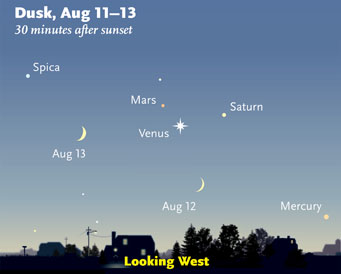 In the western sky at dusk, bright Venus lights the way to fainter Mars and Saturn. The crescent Moon joins them on August 12th and 13th. Can you spot Mercury far to their lower right? Binoculars help.

Saturn and Mars are five magnitudes fainter than Venus and thus only about 1% as bright. They're side by side in the sky, separately by three or four fingers held together at arm’s length. They'll spend the coming week sliding to the right with respect to Venus, creating a planetary triangle that changes shape from day to day. The crescent Moon joins the twilight planet scene on Thursday, August 12th (when it’s below Venus), and on Friday, the 13th (when it’s left of Venus).

Venus's proximity is one of three reasons why it's so much brighter than the other two planets. It’s also much closer to the Sun, so it’s illuminated more intensely, and it’s covered with white, brilliantly reflective clouds. Mars and Saturn look similarly bright for reasons that cancel out: Saturn is 35 times larger than Mars, but it’s much farther both from us and from the Sun.

Don’t miss this chance to do some easy astronomy from your backyard, balcony, or rooftop!

To enjoy even more eyeball astronomy during August, download this month's audio sky tour to your MP3 player and get a personally guided tour of the evening sky.