In a six-month stretch during which one comet unexpectedly went poof and a second miraculously survived a solar swingby, it's nice to know that Comet Garradd (C/2009 P1) has continued its leisurely swing through the inner solar system. 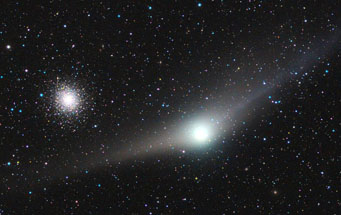 Comet Garradd (C/2009 P1) swept within 1° of spectacular Messier 92, a globular cluster in Hercules, on February 3, 2012. Italian observer Rolando Ligustri used iTelescope.net's Takahashi FSQ-106ED telescope in New Mexico and its SBIG STL-11000M camera to record the images for this composite. The field shown here is 1¼° wide. Click here for a larger view.

Perihelion came and went on December 23rd at a point 1½ astronomical units (145 million miles) from Sun and far above the planetary plane. But in the weeks since, owing to its high orbital inclination, the comet has moved closer to Earth. It's remained reasonably bright, somewhere near 7th magnitude, which makes it an inviting target for binocular and small-telescope users.

Back in November, Comet Garradd made a sharp turn and headed up through Hercules. A few days ago, it slipped less than 1° to the west of the superb globular cluster Messier 92 in Hercules — a close encounter that didn't go unnoticed by astrophotographers.

The view above, captured by Rolando Ligustri using a remotely operated telescope in New Mexico, captures the pairing beautifully. The comet's faintly blue gas tail extends about 2° toward upper right, while a more compact dust tail points toward the cluster. Ligustri recommends that you download the full-size image "to appreciate the details of M92 and the incredible number of small galaxies in the image." 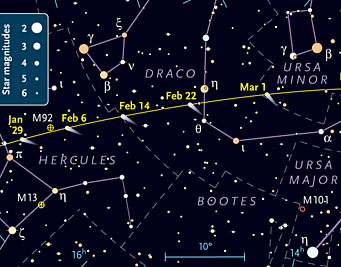 Here's where to find Comet Garradd (C/2009 P1) during the next few weeks. Positions are for 0h Universal Time on the specified dates. Stars are show to magnitude 6½. Click on the image for larger set of charts suitable for use through April.

Few of us have access to remote-controlled telescopes under pitch-dark skies, so what For the next week or so, a nearly full Moon is going to subdue Comet Garradd's luster. But after that the prospects couldn't be better for northern observers. It's picking up steam as it heads even farther north and becomes circumpolar for those in the U.S., Europe, and at comparable latitudes.

Use the chart above (and the larger versions here) to find it high in the eastern sky before dawn. In mid-February it passes near the head of Draco and continues along the arc of stars marking the Dragon's back. Throughout all of this, the visitor should remain near 7th magnitude — hardly naked-eye bright, but then again something you should be able to pick up even with modest optical aid.

By early March, when Comet Garradd comes closest to Earth, it'll be poised over the Big Dipper's bowl and perched well above the horizon as soon as the evening sky gets good and dark. Will we still be enjoying good views of it a month from now? Check back here in a few weeks for an update! In the meantime, feel free to share your impressions of its appearance in the comments section below.

This marvelous image moves this Texan to give thanks. Thank you, Signor Ligustri for sharing your labor of love with us. Isn't it great that someone from Italy (or, anywhere) can take such a photo from a mountain in New Mexico? So, thank you iTelescope, Takahashi and SBIG. Thankfully, there are still places with "pitch-dark skies". Thanks also to Kelley Beatty and Sky and Telescople for showing us where and when to look. And, most of all, I wish to thank the One who brought comets, globulars, galaxies and us into existance. (Rev. 4:11)
P.S. Thanks also to Bill H. who told me about S&T mag back in Brooklyn in 1984.

Thanks for this photo and all those others you have posted. They are magnificent. I spent some time just enjoying the incredible beauty of your pictures. It's very clear you love doing this and it's so kind of you to share your results. No one who takes the time to look can fail to be awestruck with the beauty of the universe. You capture a sense of the immensity of the universe in this photo album. I can only sit back and enjoy it with a growing sense of wonder and mystery. Thank you.
Peter A

Yes, this is a beautiful image! Thanks for sharing. And thanks for the finder chart.

I've been following Comet Garradd through moderately to badly light-polluted skies in the San Francisco Bay area since last summer. I was able to see the comet as a faint little fuzz ball near M92 through 11x56mm binoculars from my urban back yard after moonset and before dawn last week. Quite a treat. The weather and the Moon have been less cooperative since then.

Finally got to see it early this morning, from suburban Rochester, NY... with 15x45 binoculars. Was not difficult to find, and stood out as a diffuse object, against the starfield in my FOV. Would enjoy another view, under darker skies.

You do excellent work, Rolando. It looks like government or university images. I'm hoping to get a look at it with my 12 inch Meade if the clouds ever clear here in Slidell, Louisiana.

Great photo! I only have a 300mm lens for my DSLR camera, does anyone know if I would be able to get a recognizable photo with it? I can probably find some fairly dark skys to photograph under.

How Dark Are Your Skies?

Watch a Bright Star Wink Off and On