Although I've seen my share of solar eclipses, I have a soft spot for coverups of the Moon. Maybe it's because lunar eclipses often occur in the dead of night, when I can contemplate the umbra's progress serenely instead of being embedded in a frenzied, sweaty crowd waiting for the Sun's corona to make a fleeting appearance. Or maybe it's because I know that more than half of the globe can enjoy a lunar eclipse along with me.

Whatever the reason, I'm going through a little withdrawal right now. February 2008 marked the third total lunar eclipse within a 12-month span and the last time anyone saw the Moon completely awash with umbral glow. Get this: four lunar eclipses happened during 2009, and three of those were merely penumbral — meaning the Moon skirted Earth's shadow so shallowly that even someone paying close attention likely missed these. 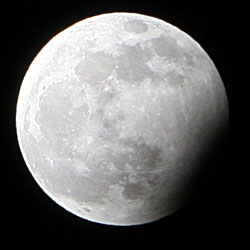 The partly eclipsed Moon was well up in a clear sky when Gianluca Masi captured this view at 19:05 UT from his Bellatrix Observatory in Ceccano, Italy.

So it was with only modest enthusiasm that I reminded myself about a partial lunar eclipse that would take place on New Year's Eve. The eclipse's midpoint came at 19:23 UT, when a slight umbral nick (amounting to only 8% of the Moon's diameter) covered the southern limb.

Skywatchers in the Eastern Hemisphere had the best seats to view this subtle event, and Web postings from across the Atlantic suggest that many of them enjoyed clear skies for the eclipse. But I missed it, because North America was still awash in daylight at the time. (Besides, it was snowing in Boston at eclipse time.)

One of those who opted to watch instead of (or maybe in addition to) ringing in the new year was Anthony Ayiomamitis. Observing from Athens, Greece, he took a series of images that showed the slow progress of the Moon's bright disk through the bit of umbra that smudged its surface. I like the way this series shows the penumbral shading, which can be notoriously difficult to judge by eye. 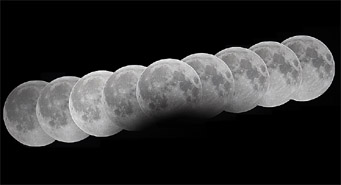 From Athens, Greece, Anthony Ayiomamitis took an image every 30 minutes to capture the partial lunar eclipse on December 31, 2009. Note both the very dark umbral coverage and the duskier shadowing caused by Earth's penumbra. Click here for a larger view.

I asked Ayiomamitis about the thin, bright rims around some of the images in his sequence — a processing artifact perhaps? "No," he replied. "We had some thin high-level clouds, and I am convinced this is the source of the problem."

In any case, I tip my sequin-spangled New Year's hat to him and to everyone who looked skyward last night to watch more than just celebratory fireworks.

S&T.com's guide to eclipses for the coming year is here. Looking that over, you'll note that a total eclipse of the Moon — the first in nearly three years — is coming on the night of December 20–21, 2010.

that so cool send me a note back of your experience

A Night to Remember

A Star Count for Everyone