The Sun's spottiness continues with a giant magnetic blotch stretched just below its equator.

Update (July 12): AR1520 released an X-class flare this afternoon at 2:53 pm (EDT). The active region was pointing towards Earth when it released a great gob of plasma known as a coronal mass ejection. So we could be due for some nice auroral displays in about two days time: around 10:20 UT (6:20am EDT or 3:20 am PDT) on July 14. That prediction is still very uncertain, with 7 hours of leeway. The radiation storm has already reached Earth because particles accelerated during the ejection traveled Earthward at relativistic speeds. So far the storm level is rated at a safe level, "S1" — no threat expected to satellites or astronauts. 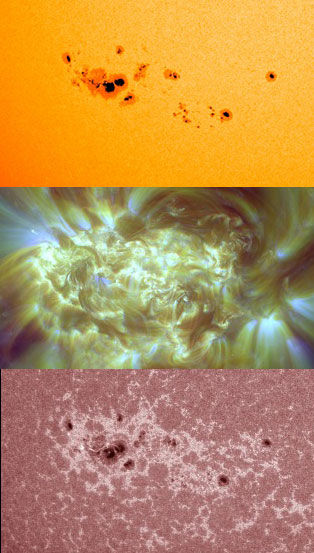 Active Region 11520 (usually shortened to AR1520) appears here with AR1519 (the spot farthest to the right) in images from NASA's Solar Dynamics Observatory. From top to bottom, the images are from the Helioseismic and Magnetic Imager (colored); the Atmospheric Imaging Assembly at 21, 19, and 17 nanometers; and the AIA at 170 nm.

Already bored by monotonous summer days? Take a break from ennui and check out the Sun. A gigantic sunspot complex recently rotated into view, so wide it stretches roughly 139,000 kilometers across. (That’s 11 Earth diameters, for those who aren’t impressed. If you drove at 70 mph without pit stops, it would take you more than 47 days to cross such a distance.)

Active Region 11520 is large enough for you to see with the naked eye. Just grab your handy No. 14 arcwelder’s glass and look out your window. Better yet, go outside. Here in Boston it’s a gorgeous, breezy day, without the sticky humidity we’ve been suffering from.

NOAA’s Space Weather Prediction Center says there’s a chance of powerful flares in the next two days (about 25%) but moderate solar activity is far more likely. AR1520’s predecessor AR1515 sent forth an X-class flare this past weekend just before the sunspot disappeared around the solar limb.

There’s a breathtaking image of AR1520 in which, as the photographer notes, the region of magnetic tangles looks like a landform. Be sure to submit your own best shots to our photo gallery.

I looked at the sun and it hurt my eyes.

One time i tried using negatives to look at the sun. I put them up against my 2.5 inch refractor and it started bruning a hole right through it!