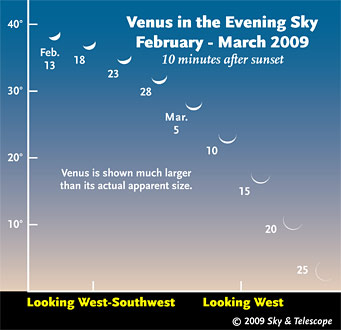 Venus hung extraordinarily high and bright in the Northern Hemisphere’s evening sky during January and February, 2009. But in mid-March, Venus started to plunge toward the sunset horizon, appearing more than 1° lower on each successive evening.

But for telescopic observers, this is the most exciting possible time to view Venus. On March 27th, our sister planet will be at inferior conjunction — as close as it will come this year to being directly between us and the Sun. As that date approaches the crescent seems too thin to be real, and it sports exotic cusp extensions as shown at right. The crescent spans nearly a full arcminute from tip to tip in late March — big enough to be seen easily in steadily supported binoculars. 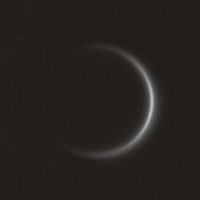 Near inferior conjunction, Venus sports exotic cusp extensions due to sunlight filtering through its atmosphere.

Near inferior conjunction, the only way to get a clear telescopic image of Venus is to view the planet in broad daylight. When doing this, you must be extremely careful not to aim your telescope (or its finderscope!) at the Sun, or you may end up permanently blind. By far the safest procedure is to view Venus in mid- to late afternoon, when both it and the Sun below it are getting lower in the sky. Place your telescope just inside the shadow of a building, so that no part of the scope is sunlit. Use binoculars or your finderscope to scan above or upper right of where the Sun would be if you could see it, and you’ll soon locate Venus. You can use our Interactive Sky Chart or your favorite planetarium software to find the precise distance and angle between Venus and the Sun on your date. 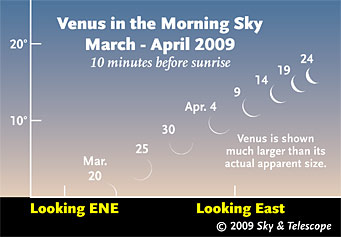 Once every 8 years — and this is one of them — inferior conjunction also provides a special treat for naked-eye observers. Because Venus passes more than 8° north of the Sun, it should be visible at both dawn and dusk for at least three days centered on March 23rd at latitude 40° north. The farther north you live, the longer the period of dawn-and-dusk visibility will be. Find a spot with unobstructed horizons to the east and west, and scout the sky with binoculars before attempting a naked-eye sighting.

I viewed Venus this morning, but it wasn't easy. I first spotted it with binoculars 14 minutes before sunrise, at 6:27 a.m. It was then 2.4 degrees above the horizon. I could barely spot in with my unaided eyes 3 minutes later, and it showed intermittently for the next 5 minutes, as it passed through the thin bands of clouds that often hang over the ocean here in Boston. It was very easy and attractive in binoculars, with the crescent quite obvious. Unfortunately, it's almost surely going to be cloudy this evening -- so much for my chances of back-to-back morning and evening sightings. Maybe tomorrow.

Incidentally, the 5.5%-illuminated Moon was very handsome indeed, but I couldn't see Mars below it -- not even with binoculars. I followed Jupiter naked-eye until just before sunrise.

On Saturday, March 21, two of us saw Venus between 11:30 and 12:30 EDT from Northfield, MA, using my 15x50 binoculars from the shade of a barn. I lost and recovered it several times. My friend didn't believe I was seeing Venus until he surprised himself by seeing it too.
His teenage son looked for it, but did not see it.
Interestingly, this is perhaps the only time when an older person, with eyes that no longer autofocus, has an advantage. We focused the binoculars on a distant mountain, so the focus would be correct for Venus.

On Friday morning last 20th March, I observed Venus in the earky morning, but only with binoculars. The same evening, it was easily observeable with the naked eye. I'll try again tomorrow from my location in SW Ireland.