As a hard-core visual astronomer, I've been feeling starved for dark skies recently. From Boston, Massachusetts, I have to drive 4 hours to get to the "gray" zone — the second darkest — shown on the Light Pollution Atlas. And nowhere east of the Mississippi falls in the "black" zone. So I was thrilled when I was invited to speak at the Oregon Star Party. 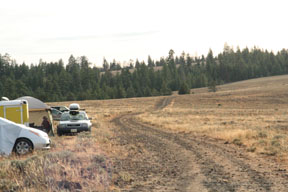 With 500 to 1,000 people camped on a 40-acre site, surrounded by a National Forest the size of Rhode Island, you can find as much togetherness or solitude as you like at the Oregon Star Party.

This get-together for stargazers, astrophotographers, and equipment geeks is held annually at Indian Trail Springs in the Ochoco National Forest. Located some 150 miles east-southeast of Portland as the crow flies, this site is nearly ideal for astronomy. At an elevation of 5,000 feet, the air is thin enough to provide superb transparency yet thick enough to breath easily. Like all the land east of the Cascade and Sierra Nevada mountains, the countryside is fairly arid, with an excellent probability of clear skies during the summer. But it's high enough and far enough north to escape the searing heat and desperate dryness of the California deserts. Big stands of ponderosa pine, ideal for camping, alternate with open sagebrush flats that provide unbroken views of the sky. 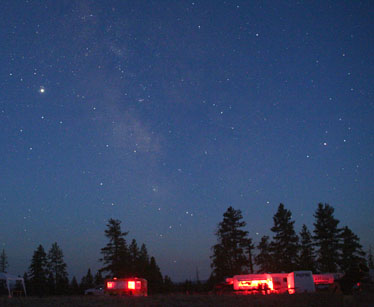 As the sky grows dark at the Oregon Star Party, the Milky Way starts to become visible behind Shawna's Espresso Blast and Mary's Chuckwagon.

There's a low glow along the western horizon from Prineville (7,500 people 40 miles distant) and Bend (80,000 people, 60 miles), but the only light in most of the sky comes from stars, airglow, and the zodiacal light. But I was reminded again that the phrase "dark sky" is really a misnomer. At any truly excellent observing site, the first thing you notice is how bright the sky is. The Milky Way is dazzling, casting enough light to walk around easily without a red flashlight. Even in my tent under the trees, I could see all my belongings by starlight alone.

I was there for three nights: Thursday through Saturday, and the conditions varied from very good to superb. Thursday, in particular, combined some of the best seeing and transparency that I've ever experienced. And as a bonus, the night was virtually windless, with low temperatures in the upper 40s (F). 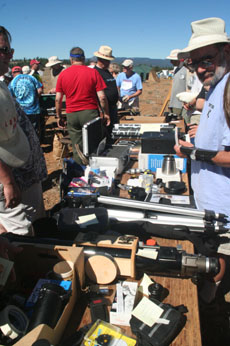 Items available at the swap table ranged from one-dollar red-LED markers to telescopes costing more than $1,000.

I've attended many astronomy gatherings, but few as upbeat and well-organized as the OSP. The huge staff of volunteers anticipated all the problems and made everything run as smooth as clockwork. Several different observing lists were suggested for people who wanted specific goals to meet, with prizes awarded to people who finished all or most of the objects on the list. The most challenging list consisted of Markarian 205, a distant Seyfert galaxy or quasar, and seven dwarf galaxies from our Local Group, all very large and fantastically faint. I didn't finish the list because of the limitations of the 65-mm telescope that I had brought along, but I did get my first satisfactory sighting of IC 1613, an ultrafaint galaxy in Cetus.

Numerous talks and other activities were scheduled during daylight hours. Most popular was the raffle for door prizes — and no wonder! A huge list of donors supplied a vast array of goodies. Most glamorous by far was a 60-mm Takahashi APO donated jointly by Anacortes, Texas Nautical, and Takahashi. I figure that the value of the prizes, pro-rated by the probability of drawing one, must surely be greater than the very modest fee for attending the party. The swap table also attracted a huge throng, and all the talks were very well attended. 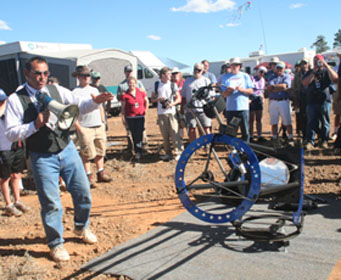 Dapper in vest and tie, Dave Powell discusses the fine points of his equally elegant string Dob during the Telescope Walkabout.

Many of the attendees and most of the organizers came from Portland's Rose City Astronomers club, a hotbed of amateur telescope making. I would guess that about two-thirds of the scopes on the field were commercial and one third homemade. String Dobs, modified truss-tube Dobs that usually contain three struts under compression braced by six cables under tension, are the most popular design, particularly in larger apertures. The Telescope Walkabout was fascinating, featuring detailed explanations of a half-dozen innovative designs.

My special thanks go to Chuck Dethloff, both for conceiving the Oregon Star Party in the first place and for letting me spend a couple of hours viewing showpiece objects through his 24-inch Dob.

So why not check out our list of annual events and find out what star parties will be held soon in your area? Try going to one — I bet you'll love it! And if you have any specially wonderful (or terrible) star-party stories that you'd like to tell, describe them as comments to this blog entry.

Tony, It's great to hear you enjoyed OSP. A couple of notes:

Your grounding in east coast geography is showing. 150 miles west-southwest of Portland is the Pacific Ocean. OSP is east southeast of Portland. Likewise Prineville and Bend are west of the sight.

Well organized? You'll be impressed to know the person who was to run the activities tent (where the speakers and raffle took place) had a last minute work emergency and couldn't make it. They reshuffled personnel to cover the gap.

See you next year?

Tony: Your talk was very good too. I'm a long-time subscriber and I very much enjoyed seeing the faces with the names, and even the offices! You have a nice sense of humor and it made the presentation an easy hour of information.

On your recommendation, I tried the interactive sky atlas, but it didn't work. I even downloaded a new Java and it still didn't work.

And Mike, he said east-southeast in the article. Margaret

I was out at the OSP and took a panorama of the Milky Way you speak of. It was exceptionally bright. You can see the image here: http://nebulousentity.org/astro/
The photo is a composite of 12 images, each a 4 minute exposure, ISO 1600, f4.5 on a Canon 40D with a 10mm-22mm lens, on a SkyMemo mount.
Thanks to all the organizers of the OSP!

You may be interested to know that there is a truly dark site on the East Coast. According to S&T (http://skyandtelescope.org/community/skyblog/newsblog/21914474.html)...

Only within the last decade have stargazers come to appreciate what residents of north-central Pennsylvania have long known: the night skies over Cherry Springs State Park are among the darkest anywhere in the eastern U.S.