Live webcasts of astronomical events aren't new. Travel-impaired viewers have watched solar eclipses for years. Here's something new: Now you can watch the winter solstice via the Internet. 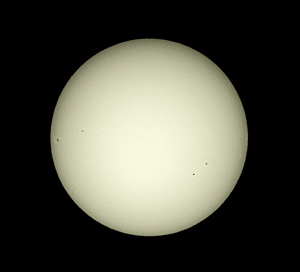 Through a telescope with a specially designed solar filter placed securely over the front, the Sun may look something like this during the transit of Mercury on November 8, 2006. Can you tell which speck is Mercury and which are sunspots? The planet appears as a perfectly round, totally black disk, whereas a sunspot generally has a dark gray umbra (interior) skirted by a lighter gray penumbra (exterior).

A posting on the sundial mailing list by Michael J. Harley, and then forwarded to me by Richard Koolish, explains that there will be a live webcast of the solstice sunrise at Newgrange in Ireland.

The Newgrange monument is an ancient, massive stone structure that has a portal aligned such that sunlight on the winter solstice reaches the far end of a long passageway.

The live feed — made possible by Heritage Ireland — was this morning (sorry, I got the message about an hour ago), but you can also catch it Saturday morning, which will be closest to the actual time of the Sun's southernmost declination at 1:08 a.m. EST. The webcast begins at 3:30 a.m. EST, which is 8:30 Greenwich time (or Universal Time). Sunlight should be visible in the passage 8:58 to 9:15 a.m. GMT.

The winter solstice in general is defined - NOT as "the actual time of the Sun's southernmost declination" - but
as when the Sun's apparent celestial longitude is 270
degrees (ref.: THE ASTRONOMICAL ALMANAC FOR THE YEAR 2007),
I believe!