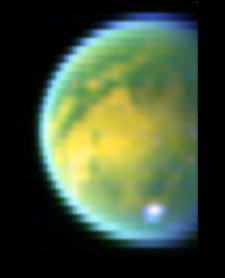 Cassini's Visual and Infrared Mapping Spectrometer used filters at 2.0 and 5.0 microns to see through the moon's dense, opaque atmosphere and reveal tantalizing surface features. The bright spot near the bottom of this false-color view is a high-altitude patch of methane clouds.

Two days ago, as the Cassini spacecraft was settling into routine operations while orbiting Saturn, it passed Titan, the planet's largest moon, at a distant 339,000 kilometers (211,000 miles). That was too far away for the mission team to consider the event an official flyby — but close enough for the spacecraft's telephoto camera and an imaging spectrometer to take a peek anyway.

The two instruments' snapshots show the surface in surprising detail, despite the interference from Titan's opaque, haze-choked atmosphere. Cassini's views reveal a tantalizing variety of straight, curved, and round surface features, suggesting that the Mercury-size moon has been (or is) geologically active. "We're seeing a totally alien surface," reports Elizabeth Turtle, an imaging-team member from the University of Arizona. 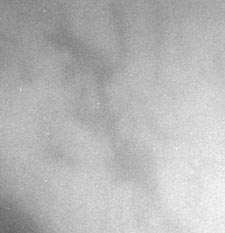 Even this 'raw' near-infrared image shows enigmatic geologic features. Is this 700-km-long chain of dark markings a frozen river system? A fault complex? An eruption of organic goo? Mission scientists are hoping to see Titan's surface much more clearly in the months ahead.

Lots of subtle features are obvious even in raw, unenhanced images of Titan, raising scientists' hopes that far more detail will become evident during the first close brush (1,200 km away) on October 26th. After that there'll be 44 additional flybys over the next four years, some as close as 950 km.

Titan's nitrogen-dominated atmosphere proved completely opaque in 1981 when Voyager 1 swept by at a distance of just 4,000 km. The secret to Cassini's success has been to view the enshrouded moon through specific slices of near-infrared light, sometimes in combination with a polarizing filter, and at these wavelengths the atmosphere is mostly transparent. The onboard camera has been using a near-infrared filter at 938 nanometers (9380 angstroms), while the Visual and Infrared Mapping Spectrometer, or VIMS, has found success farther in the infrared at 2.0 and 5.0 microns. 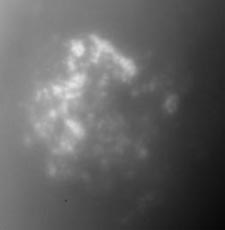 A large cluster of clouds, roughly 500 kilometers across and probably consisting of liquid methane, floats high above the surface of Titan. Cassini's telephoto camera recorded this near-infrared image on July 2, 2004, when the spacecraft was about 340,000 km away.

Thanks to earlier efforts by ground-based observers and the Hubble Space Telescope, Cassini scientists suspected that brighter, higher regions on Titan were "continents" of water ice, and that organic solids and liquids probably covered the low, dark areas. But already this mysterious moon has challenged those expectations. "At some wavelengths," comments VIMS investigator Kevin Baines (Jet Propulsion Laboratory), "we see dark regions of relatively pure water ice and brighter regions with a much higher amount of non-ice materials, such as simple hydrocarbons."

Once it gets closer to Titan, Cassini will be able to use its onboard radar system to probe and map the surface directly, without atmospheric interference. And a much closer look at the surface should come early on January 14, 2005, when the European-built Huygens probe plops or splashes down after a 2-hour descent through Titan's atmosphere.