Discovering a comet remains one of amateur astronomy's greatest accomplishments, and five individuals are being honored for doing just that.

I've never tried hunting for comets. I just don't have the keen eye (nor the patience) for it. But thank goodness others do, even in this age of competition from giant professional telescopes that robotically sweep the skies nightly for comets and asteroids.

Recently five amateurs were honored with the 2012 Edgar Wilson Award. Established in 1998, this award goes to those dedicated observers lucky enough to spot a comet using amateur-grade equipment. Below is the list of winners: 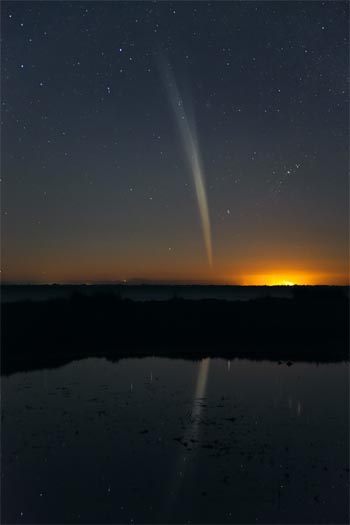 Picture-perfect Comet Lovejoy (C/2011 W3) hangs in the predawn sky over Mandurah Estuary near Perth, Australia. Photographer Colin Legg captured the comet and its reflection on December 22, 2011, in a 13-second exposure with a 70-mm f/4 lens at ISO 3200. Click on the image for a larger view.

It's worth noting that Comet Lovejoy (C/2011 W3) was a sungrazer that put on a spectacular show for early risers in the Southern Hemisphere.

Also, many in the amateur community feel that Vitali Nevski (in Belarus) and Artyom Novichonok (in Russia) should have been recognized as the co-discoverers of comet C/2012 S1, which they spotted in images taken last September 24th. However, their initial report made no comment about cometary features, and by the time their own follow-up observations showed the object to be a comet this fact had been noted by two other observers. So the IAU's Central Bureau for Astronomical Telegrams opted to name it "Comet ISON" instead, in recognition that the telescope they used is part of the worldwide International Scientific Optical Network.

First given in 1999, this award results from a bequest by the estate of American businessman Edgar Wilson, who lived in Lexington, Kentucky, and had a keen interest in astronomy before his death in 1976. The fund usually provides about $20,000 for amateurs who find a new comet using equipment not owned by a professional observatory. Here's more detail about the Edgar Wilson Award, and here's a list of past recipients.

In addition to recognizing the discovers, "Comet Nevski-Novichonok" is much more fun to say than "Comet ISON."

Muy congratulations to them and Glory to God, the creator of them